Take a rare look inside the notorious Ottawa-Carleton Detention Centre

The Ottawa Carleton-Detention Centre is making steps to improve the living conditions and overcrowding problems plaguing its facility, a new report says.

On Thursday, after media were granted a rare tour inside the jail, a 13-person task force comprised of ministry staff, union and community leaders, released its first quarterly Ottawa jail progress report.

According to the task force, OCDC has completed 11 of the 42 recommendations made in June.

Christina Danylchenko, the Assistant Deputy Minister, Institutional Services, was one of several officials on the media tour. She says the changes, specifically around over crowding, have made a significant improvement in inmates' daily lives.

Those changes include reducing daily bed utilization to an average of 87%, providing imates with shower slippers, eliminating triple bunking and bunking of any kind in shower cells, a review of heatlh care services, painting walls within the prison and starting the transition of a former youth wing into a special wing for inmates with mental health needs.

The report also says fights, over crowding and overall wellness at the prison has improved in recent months.

"Our government is committed to continuing to work towards the implementation of all 42 recommendations, as well as to transforming Ontario's correctional system in order to deliver the programs and supports necessary to successfully integrate offenders back into the community," said David Orazietti, Minister of Community Safety and Correctional Services in a news release.

Some critics, however, believe the recommendations and subsequent changes do not address the underlying problems facing Ontario's corrections system.

Criminal Defence Attorney Michael Spratt says the changes represent an attempt by the government to fix a public relations problem.

"It's not enough. That's the short answer," Spratt says. "A fresh coat of paint  and ending some of the most egregious behaviours like housing people in a shower isn't enough to fix a problem system. There needs to be change from the top, from the political forces who are in charge of the institutions."

At the time of the media tour, OCDC was operating at 102% capacity. Most of that crowding occurs in the three male wings of the detention centre. Staff on the tour told reporters capacity would drop below 100% overnight as inmates were transferred in and out of the facility.

"We move inmates throughout our institutions," says Greg Flood, a media relations officer with the Ontario Ministry of Corrections and Community Services. "We try to make sure that we have capacity available elsewhere when others fill up and we have a transition coordinator who deals with that."

The task force is expected to release its next progress report by the end of January. 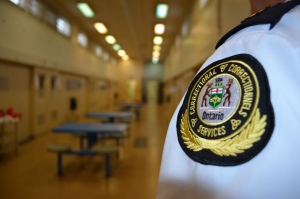 A rare look inside the Ottawa Carleton Detention Centre