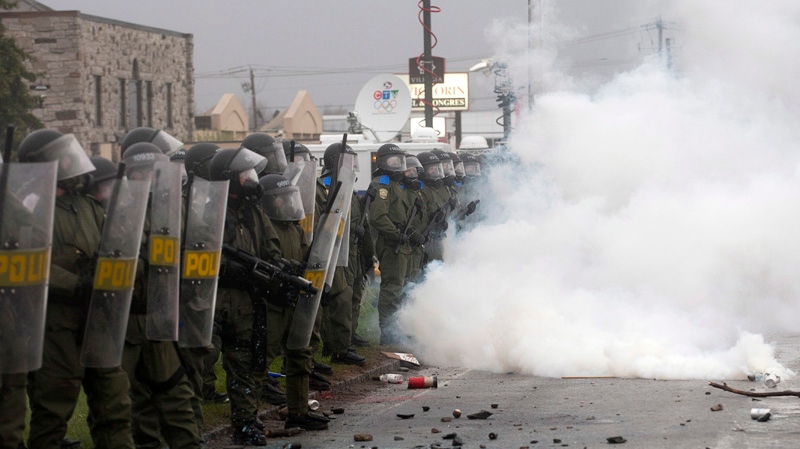 Riot police stand in a cloud of teargas, protecting a perimeter from riioters as the Quebec Liberal Party is meeting Friday, May 4, 2012 Victoriaville, Quebec. A violent standoff erupted on the streets of a small city where Quebec's governing party was holding its weekend convention, as protesters and provincial police rained physical abuse on each other Friday. THE CANADIAN PRESS/Jacques Boissinot

VICTORIAVILLE, Que. - There has been a possible breakthrough in the three-month tuition crisis in Quebec, with news of a tentative agreement between the provincial government and student leaders.

It's unclear whether the deal, hammered out after a 24 hour negotiating session that dragged through the night, will end months of unrest. Student leaders were referring to the arrangement as a government "offer," while the government was using more affirmative language.

"What makes me most satisfied, under the circumstances, is that students who want to return to class can do it."

While the minister expressed confidence, the conflict was not over yet.

Details of the agreement were only set to be announced publicly later Saturday, after student leaders had a chance to share them with members.

Students planned to vote on the arrangement over the coming days.

Until then, the student strikes are still on.

"This is not the end (of the conflict) - but it's the beginning of the end," said Martine Desjardins, one of the three main student representatives.

The news of a silver lining came after one of the darkest days of the conflict.

A protester lost use of an eye after he was wounded in a savage riot in Quebec that broke out Friday during a protest over tuition increases, health officials said.

The demonstrator was one of two young men admitted to hospital with serious injuries following the violent confrontation outside a Quebec Liberal Party convention in Victoriaville.

The other man was admitted with fractures to his face and skull, along with a cerebral contusion.

In all, nine people were taken to hospital, including three police officers. One officer had been kicked, punched and beaten with a stick in scenes captured by television cameras.

Quebec provincial police made 109 arrests in connection with the riot -- many of them after pulling over school buses that were returning late Friday to Montreal.

The Charest Liberals had moved their convention to Victoriaville from Montreal to try to get away from the protests rocking Quebec.

But after Friday's violent events, there were more protests including a peaceful one Saturday.

Outside the convention centre where Liberals were gathered, not everyone was immediately aware of the deal in Quebec City.

And not everyone cared. Among those joining the students were groups against shale gas drilling, wind turbines, and those promoting Quebec independence.

A small group of students was holding a sit-in outside the convention centre, facing off against riot police. One group of teens said they were aware of the deal, though not its details, and said they won't stop protesting unless both sides compromise. "Charest has to give up something too," said Jerome Poudrier, a 16-year-old high school student from Victoriaville, who came to the protest with his older sister.

As for the previous day's disturbing events, Nicole Lamy, a 51-year-old mother with two children who are taking part in the protests, blamed the escalation of violence on Premier Jean Charest's government.

"It's very sad to see this happen," she said. "The contempt this government has shown students..."

Quebec provincial police, meanwhile, pointed the finger at a small number of people who chose to stick around after things turned violent.

"Most of the people who didn't want that kind of thing to happen, they left."