Teachers, students barricade themselves inside UQO 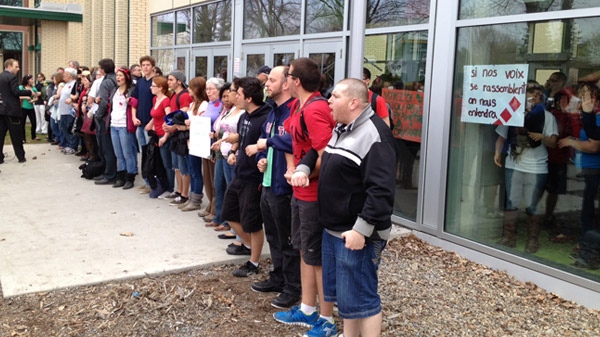 Gatineau university teachers, students barricade themselves inside school in protest.

Teachers joined students who barricaded themselves inside the Universite du Quebec en Outaouais in Gatineau Monday, defying a court order to return to class.

Police in riot gear were standing by as the group protested planned Quebec tuition fee increases of $325 per year over five years until the late afternoon.

Tables and chairs were placed in front of the school's doors, with students and teachers linking arms outside the entrance.

The court injunction that ordered them to return to class was been challenged but then upheld, at which time the students and teachers left peacefully.

Protests have been frequently happening across the province for over two months, including students who refuse to go to class and sometimes-violent clashes in Montreal.

Students first started voicing their displeasure over a year ago.