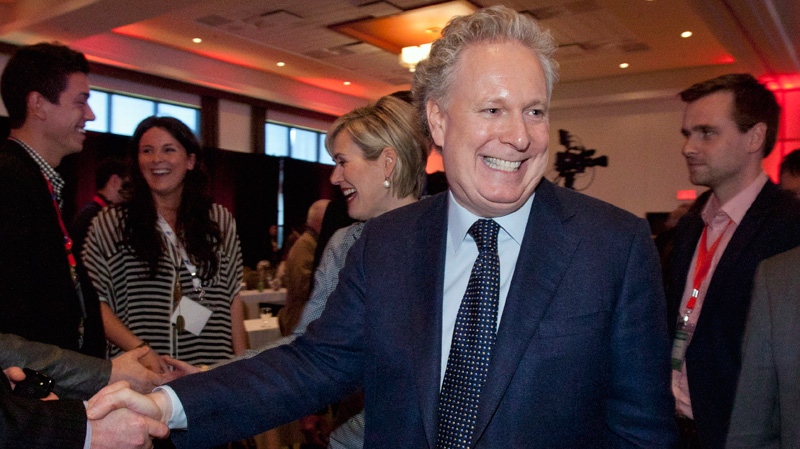 Quebec Premier Jean Charest shakes hands with delegates in a hotel where the Quebec Liberal Party is meeting in Victoriaville, Que., Saturday, May 5, 2012. (Jacques Boissinot / THE CANADIAN PRESS)

VICTORIAVILLE, Que. - Quebec Premier Jean Charest is blaming the province's striking students for a months-long stalemate that only now appears to be on the verge of a resolution.

A potential deal, struck Saturday after a marathon bargaining session, is being hailed by student leaders as "the beginning of the end" of a conflict that has grown increasingly contentious.

Close to one-third of Quebec's university students have been on strike for 81-days, protesting what was initially a 75-per cent hike in their tuition fees.

But the abruptness with which the deal was reached has led to questions about why the government waited as long as it did to sit down with the students.

Charest defended his government's handling of the strike on Sunday, saying its openness toward the students wasn't always reciprocal.

"When it lasts this long, it takes two to tango," Charest told reporters after giving a speech to party supporters.

Several hundred protesters made the two-hour trip to this small Quebec town on Friday in an attempt to disrupt a policy convention being held by Charest's Liberals.

A small but violent skirmish with police ensued, leaving several students and police officers injured. Two students were listed in serious condition at a local hospital.

That set the stage for dramatic appeals for calm by student leaders as they sat down at the bargaining table with government representatives.

Some 24-hours later they emerged with an offer in place that would see proposed tuition hikes of $1778 over seven years compensated with cuts to other fees.

The breakthrough, Charest said, only came after the students had turned down several previous offers, including some made privately.

"We invited them to the table to sit down with us, and they turned us away," Charest said.

In the short term, students will receive a $127 discount in their ancillary university fees to things like athletic programs, health services and student associations for the upcoming fall term.

They will then have the chance to demonstrate that significant savings can be found in the administrative budgets of Quebec's universities. These savings will be used to sustain the fee reduction into the future.

This responded to one of the central demands of the students, who claimed it was unfair for them to shoulder tuition increases when university administrators were managing their budgets poorly.

Student leaders, though, are not claiming victory. Their unions still have to vote on the proposal, which will be presented to their members this week.

They will however be able to argue that, after three months of striking, students won't be paying more come September.

As for the government, it maintains its original insistence that university tuition must raise to keep post-secondary education in the province competitive.

"It is a fair approach - and it is going to be not on tuition fees but on administrative fees that are charged to students," Charest said.

"The fact is we have maintained the policy, and in fairness we are going to look if we can do better on the administration fees."

With a proposal to end the strike now on the table, there were few protesters in sight outside the convention centre in Victoriaville where the Liberals had gathered.

The protests on Friday, and the breakthrough in negotiations on Saturday, did much to distract from a convention meant to finalize the party's election program.

Charest has made it clear he intends to campaign on his economic policies, the centrepiece of which is his plan for developing Quebec's north.

While polls suggest most Quebecers have soured on the strike, it still represents a weakness for Charest as many are asking why it has lasted this long.

In his speech to the party, Charest did his best to refocus attention on Quebec's economic performance since the Liberals took power in 2003.

The government's reforms, he said, not only allowed Quebec to weather the financial crisis, but emerge as one of the world's most productive economies.

He also spoke at length about the Plan Nord, which he has promised would create 500,000 jobs. Its success would define the legacy of a premier who has suffered low approval ratings throughout his nine-year tenure.

Charest ended his speech with a fiery tirade against Parti Quebecois Leader Pauline Marois, who he accused of wanting to impose a "moratorium" on Quebec's future.

The premier has been particularly incensed over Marois supporting the striking students. She has gone so far as to don the red felt patch -- the symbol of the student movement -- in the provincial assembly.

"I think it is an abysmal failure of leadership on her part," he told reporters afterwards. "It revealed that she is certainly not ready and up to the job."

Though Charest has until 2013 to return to the polls, speculation has been rife about the possibility of a snap spring election.

A provincial inquiry into corruption in Quebec's construction industry gets underway this month, and there is the potential it could lead to some embarrassing revelations for Charest.

Some wondered if Charest might prefer a spring election, before the substantive work of the inquiry gets underway this fall.

But Charest put a damper on the election speculation, saying a June election was "not part of the program."