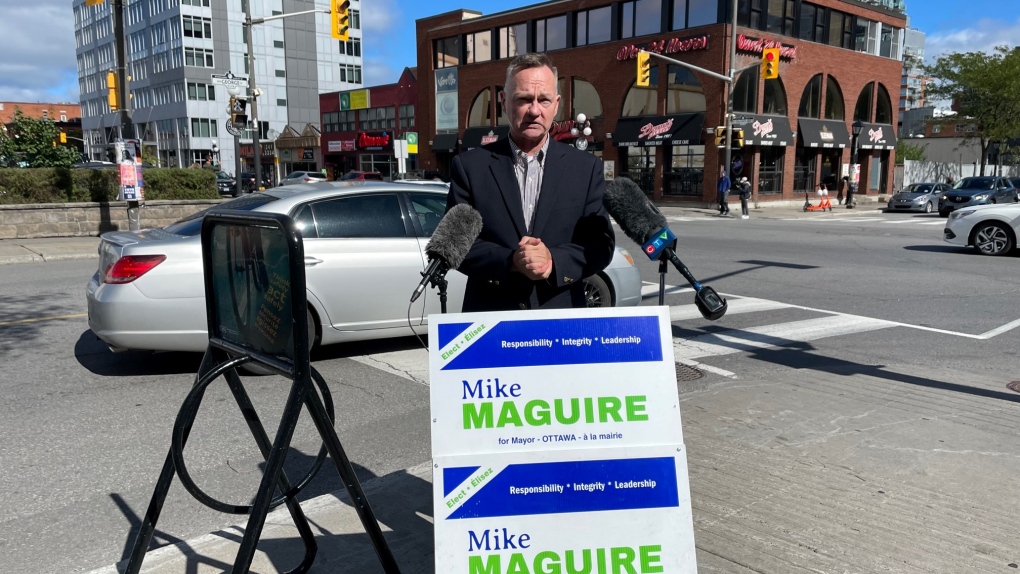 Maguire says he has been consulting with front-line mental health counsellors on the best approaches to reduce the effects of homelessness, how best to respond to housing needs of vulnerable residents, and avout ideas to reduce the level of street crime.

He proposed a three-pronged approach Friday.

“Ottawa has a homelessness problem. I think everyone is perfectly aware of that,” he said, speaking to reporters in the ByWard Market. “We need to increase mental health services for the individuals who are suffering from terrible mental health anguish. That’s going to be one of the remedies.”

He also called for more police enforcement to “get rid of the drug dealers; to get rid of these poisons on our streets.”

He is also proposing a personal municipal rental assistance subsidy.

“This will be less expensive, more responsive and flexible and, will allow qualified individuals some leeway in choosing where they want to live.”

Other mayoral candidates have made pledges on the issues of housing, homelessness and safety.

Mark Sutcliffe announced Saturday a plan he previously spoke to CTV News about, pledging to hire more police officers, open a new station in the ByWard Market and push to install CCTV cameras in an effort to deter crime.

Catherine McKenney is vowing to end chronic homelessness in the space of a single council term, by building supportive housing for 250 individuals through the federal Rapid Housing Initiative and housing another 250 people through housing allowances.

McKenney also says their focus with regard to policing is to rebuild trust between the community and the police service and reassess policing priorities.

Four days of special advance voting are underway between Saturday and Tuesday, allowing residents to cast ballots at any of a list of locations, regardless of their address. Election Day is Oct. 24.

The men’s World Cup quarterfinal stage kicked off on Friday as Croatia eliminated Brazil and Argentina beat the Netherlands. CTVNews.ca has all the latest from the tournament.

France to make condoms free for anyone under 25, Macron says

France will make condoms free in pharmacies for anyone up to age 25 in the new year, President Emmanuel Macron announced Friday.