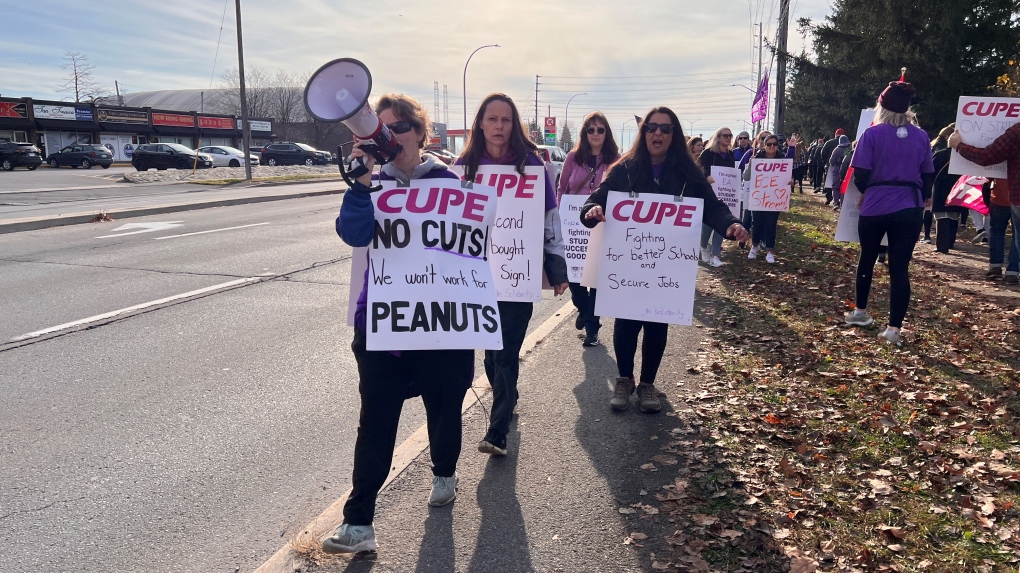 Dozens of schools in Ottawa and eastern Ontario are closed to in-person learning for a second day today, as education workers continue their "political protest" against the Ontario government.

The 55,000 early childhood educators, librarians, custodians and other education workers represented by the Canadian Union of Public Employees hit the picket lines on Friday after the Ontario government passed legislation to impose a new four-year contract on workers and end a potential strike.

Only the Ottawa Carleton District School Board and Conseil des ecoles catholiques du Centre-Est are open for in-person learning today.

The union says the protest will continue until the government repeals the contract imposed on workers last week and returns to the bargaining table.

"Right now, what November looks like is ongoing political protests and I think what's really, really interesting is the level of support and solidarity that is starting to grow day, by day, by day," CUPE-OSBCU president Laura Walton told Newtalk 580 CFRA on Sunday.

"We have now seen every single union that endorsed Doug Ford condemn what he has done. They're on the protest line with us; they're coming out and saying enough is enough, they need to repeal this bill and get back to the bargaining table."

CUPE says protests will be held at the following locations in Ottawa today:

Walton says the union is prepared to return to the bargaining table immediately.  CUPE is scheduled to hold a media conference this morning.

An Abacus Data poll released this weekend showed six out of 10 Ontarians blame the Ontario government for the ongoing labour disruption in classrooms.

"This government doesn't care about our children," Jessica Lyons of the Ontario Parent Action Network said. "This was never about our children. They have only ever made more and more cuts to education. My children are in classrooms with $800 less per student."

Parents and students admit going to school in-person is a better learning experience.

"Kids should remain in school. They should not go for online learning, that's not actually learning for them," parent Raman Preet Singh said.

"It has affected me a little bit on school work, mainly because now I have to like test and stuff online when it's easier to do it in-person," Grade 7 student Bryson Grant said, adding he misses in-person school activities like sports.