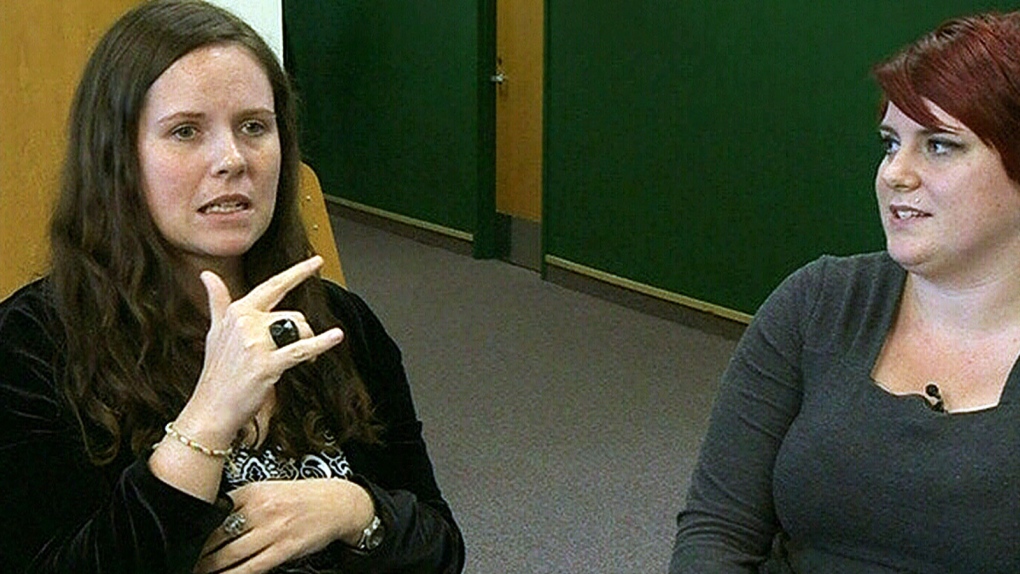 An Ottawa area woman who is blind and deaf wants an apology from Air Canada after being kicked off a flight.

An Ottawa area woman who is deafblind has launched a formal complaint against Air Canada after a very difficult trip to Alberta last week.  Christine Roschaert, or “Coco” as she's known, has travelled the world, helping people in third world countries who are deaf and blind like her. She says she's never encountered a flight like she took last week here in Canada, where she was taken off the plane and still isn't sure why.

"Hello everyone, I can't see you. Can you wave to me?”   Christine Roschaert is addressing an audience in Edmonton where she has travelled in her capacity as a motivational speaker.  Roschaert, originally from Cornwall, Ontario, is currently living in Nepal and is the director of the Nepal Deafblind Project. In an interview with CTV Edmonton, Roschaert said “I feel like I have to tell them there is hope for them.”

She has shared this message in more than 50 countries, on more than one thousand flights, including dozens on board Air Canada. But the Air Canada flight she took last Friday from Ottawa to Edmonton traumatized her.

“I thought I was being arrested for something or that I was in trouble,” says Roschaert.

The 33-year-old boarded her plane without a problem. Before takeoff, though, a manager with Air Canada told her she couldn't travel without medical clearance.

In a statement, Air Canada said it”recognizes that there are many levels of blindness or deafness and each case is different. For this reason, we require passengers with special needs to contact our Medical Desk when booking as each case is unique and every individual has a different level of impairment and ability. Air Canada can carry a passenger who is deaf and blind without an attendant if it is determined that the passenger has sufficient residual hearing or vision to be able to receive and understand safety instructions during all critical phases of the flight, including cases where aircraft may have to be evacuated quickly.  We acted in this instance to ensure the safety of Ms. Roschaert and all customers aboard the aircraft, which is always our first priority.”

It's a long-standing policy that Roschaert had never encountered, despite flying with Air Canada several times in the past.

“Do they look at me as a capable person?” asks Roschaert, “I can do anything except see and hear.”

Roschaert was then put on a flight to Edmonton through Calgary with more problems she says, at each stop.

“There was no communication, I had no idea what was going on , I felt quite scared to be honest.”

Air Canada says the situation unfolded differently.  Its statement continues: “Ms. Roschaert’s reservation was made via a travel agency and, as in the case of all visually and hearing impaired customers, Air Canada advised the travel agency that she was required to obtain medical clearance from our specialized medical desk prior to flying unaccompanied, as detailed on the aircanada.com website.

After Ms. Roschaert checked in and boarded, our Ottawa staff became aware that medical clearance had in fact not been confirmed.  Out of an abundance of caution, we had no choice but to re-accommodate her on an alternate flight after medical clearance could be obtained. Our staff used her iPad to communicate and reassured her they would look after her. Once finalized, she was rescheduled at no cost on a flight to Calgary with a connecting flight to Edmonton, and she arrived a few hours after her originally scheduled time.

Jessica White works with the deafblind community in the Ottawa area.

"We're saddened by what's happened,” says White, “but this is a good platform for Air Canada to just move forward and hopefully prevent an incident like this from happening again.”

Roschaert is sharing her experience on YouTube and says she'll continue to travel alone. But she won’t travel with Air Canada.  She has turned in her return ticket and purchased a ticket with WestJet instead.  She’s also filed a complaint with the Canadian Transportation Agency, unhappy with Air Canada’s response.