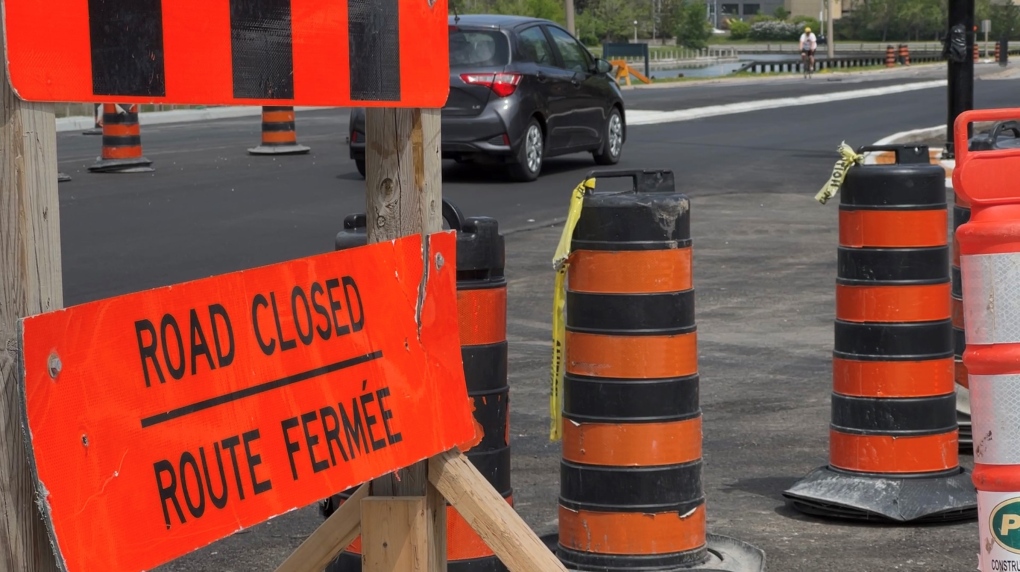 Monday officially marks the start of construction season in the capital and more roads will likely begin to close as improvements and rehabilitation goes underway. Ottawa, Ont. May 16, 2022. (Tyler Fleming / CTV News Ottawa)

Ottawa's second season – construction season – officially kicked off Monday, with tens of millions of dollars worth of projects on the work plan for this spring and summer.

“It’s something that we heard from residents loud and clear, that they’re tired with the state of their roads,” said Tierney. “We increased infrastructure spending by 53 per cent the last budget approval and now you are going to see a lot of construction this year.

“When people actually see their tax dollars being paved they have a better appreciation of something like that versus a little bit of inconvenience,” Tierney continued, adding that cycle and pathway improvements will benefit everyone. “The more we can keep people out of vehicles the ability to walk of cycle around our communities is always good news at the same time there is still a lot of things we can still do and I anticipate that this year will be one of the busier years that people will see.”

Tierney and Harder launched construction season at the Strandherd Drive widening project, which will widen Strandherd to four lanes from Marvista Drive to Jockvale Road. The $112 million project began in 2020 and is scheduled to wrap up in the fall of 2023. Work this year includes construction on the westbound lanes and new sidewalks and cycle tracks on the north side of Strandherd Drive.

Harder says Barrhaven’s new bridge is ahead of schedule. The $112 million project, which was scheduled for completion in 2023, will likely see vehicles rolling by the fall.

“The project is very inclusive of more than just a bridge over a railroad track and four lanes,” says Harder. “Before that, you couldn’t ride a bike you could not walk, now it’s a direct route. I think we’re going to see a ton more people who are going to be out walking and cycling and people getting from one place to another more conveniently and that’s important.”

Phil Landry, director of Ottawa’s traffic services says while there will be an increase in road work this season, the city has worked closely with construction crews in order to make the city a navigable as possible.

“It’s all sort of like a puzzle trying to put it together and the hope is that we can minimize those disruptions,” says Landry. “The good news is, once they get that work done, they aren’t back for another 50 to 80 to 90 years so sort of short-term pain for long-term gain.”

Another major project this summer is the $43.7 million reconstruction of Albert Street, Queen Street, Slater Street and Bronson Avenue.  Construction this year will focus on replacing underground infrastructure and road construction on Albert and Slater Streets.

Construction this spring and summer will also continue on the Montreal Road revitalization project. Only a single westbound lane is open between St. Laurent Boulevard and the Vanier Parkway.

Forty-six people were found dead in and near a tractor-trailer and 16 others were taken to hospitals in a presumed migrant smuggling attempt into the United States, officials in San Antonio said.

An Amtrak passenger train traveling from Los Angeles to Chicago struck a dump truck Monday in a remote area of Missouri, killing three people and injuring dozens more as rail cars tumbled off the tracks and landed on their sides, officials said.

As long lines persist, Canadians travelling in the next 24 to 48 hours are being given priority at some passport offices.