Calls for Pembroke, Ont. mural depicting Catholic saint to be taken down

PEMBROKE, ONT. -- The City of Pembroke is reviewing one of the town’s 34 local murals, and whether it should be taken down in light of the ongoing findings of unmarked graves at residential school sites.

Painted in 1992, the mural titled “Marguerite d’Youville and Her Mission”, at the corner of Church Street and Pembroke Street West in downtown Pembroke, appears to depict a pair of nuns beckoning out to an Indigenous child.

D’Youville was born in Varennes, Quebec, in 1701, and is known as the founder of the Sisters of Charity of Montreal, the “Grey Nuns”. She was known for caring for the poor and sick, and had a sister community of grey nuns set up in Pembroke. Pope John Paul II canonized d'Youville in 1990, making her the first native-born Canadian to become a saint in the Roman Catholic Church. She died in 1771, about 100 years before the residential school system in Canada began.

An online petition calling for the mural to come down has about 15,000 signatures.

“I think it should be taken down and painted over, and with better representation of the First Nations,” says Nikoma Tennisco, an Indigenous member of the Pembroke community.

“I noticed it a long time ago,” Tennisco goes onto say, “I’ve been coming to this taco place (across the street) regularly and it’s definitely a trigger for Indigenous people and it’s misrepresentation of who we are and what we believe. And it represents all the hurt and everything that has happened.” 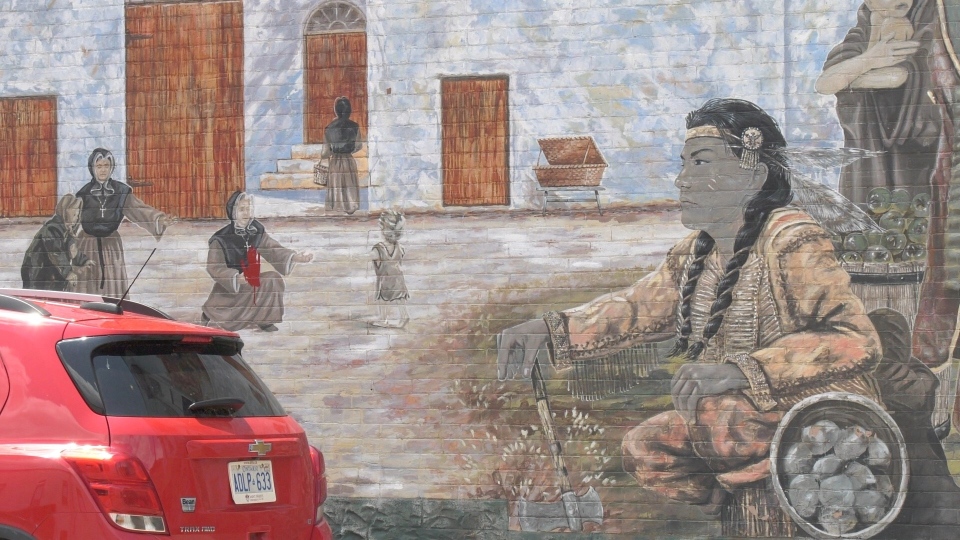 The city says they are seeking feedback and recommendations from local Indigenous and community leaders on what to do with the mural. Mayor Michael LeMay added that it is crucial to be respectful of the concerns raised and the symbols the mural may represent.

“It’s a constant reminder of that not so rosy relationship we’ve had with the Catholic Church,” says Duane Gastant Aucoin, an Indigenous member of Pembroke’s diversity committee. “To me, it’s offensive but not to the degree of the Algonquin people because of their relationship with the grey nuns.”

Aucoin says the decision on whether the mural should come down is one that should not be made by majority.

“The Pikwakanagan people, whose land this is; whatever their wishes and regards to this mural, that’s what should be supported,” says Aucoin.

In the meantime, red handprints and markings have been put overtop of the mural. 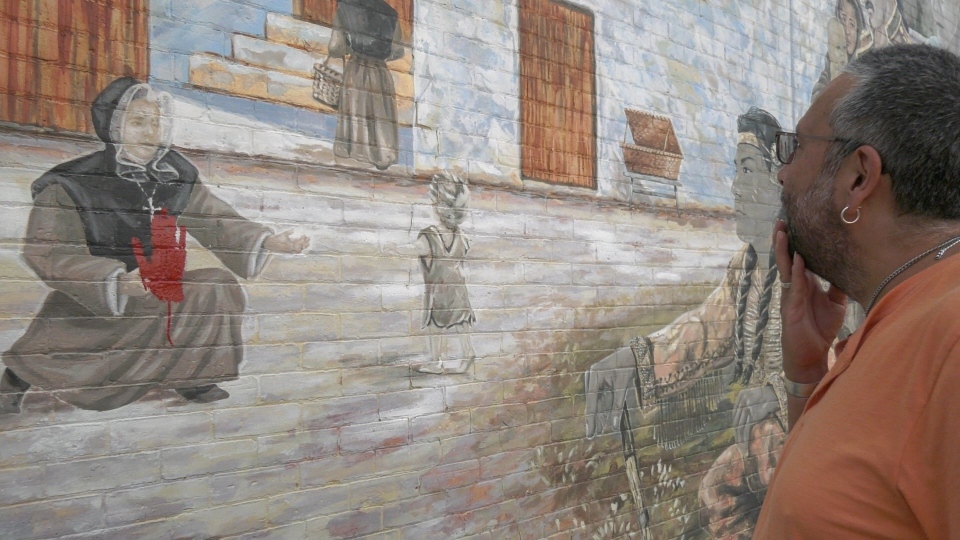 “I can tell you, I thought about putting red hand prints on this mural when I discovered it,” says Aucoin. “Because that anger just had to go somewhere.”

“I think it’s actually a very polite handprint,” says Tennisco, referring to the markings as a form of protest. “There was only the two handprints, and that’s the truth behind what that painting represents.”