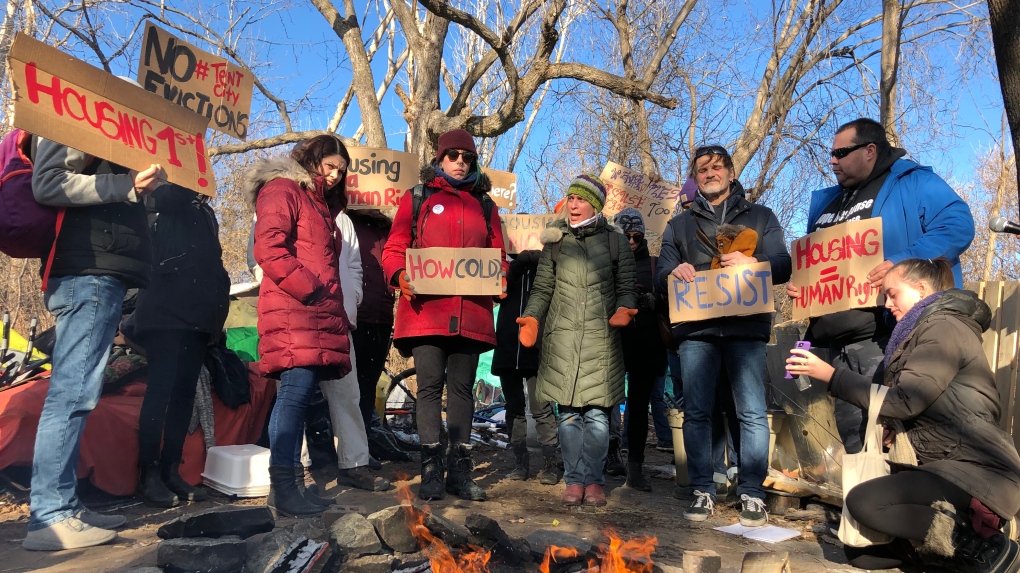 Justin Bager crawls into his tent.  It’s crammed with everything from a bed to a lazy-boy, toilet paper and Halloween candy.

“It’s cozy,” he says looking around, “we can withstand the winter if we have to, it would suck, but we can make do.”

Justin, along with about eight others, still calls the wooded area on National Capital Commission (NCC) property behind the Bayview LRT Station, home.  The encampment, known by many as “tent city”, was created in October when the weather started getting colder.  The group, initially of about 14, had been living on the streets since April when they were left homeless by a Lebreton Street rooming house fire.  The tents were needed to deal with the elements.  City Councillors Catherine McKenney and Jeff Leiper have been working with group this fall in hopes of finding them emergency housing, four of the residents remain without somewhere to live.

“Every level of government has failed these people,” says McKenney.

“The National Capital Commission (NCC) continues to support the efforts of the City of Ottawa and community partners to secure accommodation for those residents who have been living in an encampment on both NCC and City of Ottawa property near the Bayview Yards.

While we recognize the health and safety risks for these residents means that the encampment is not a sustainable solution, we want to provide our municipal and community partners, working with the residents themselves, the opportunity and time to find housing options.

The NCC and the City issued verbal notices this past Friday asking residents to leave the encampment once they have been offered such options, given the ongoing health and safety risks, including those due to the onset of colder weather.

We will continue to collaborate with City of Ottawa and community service partners as they work on accommodation solutions, with the shared goal of finding safer housing options.”

“Canada is the tenth largest economy in the world,” says Farha, “we’re one of the richest countries in the world, there’s absolutely no reason that anyone should be homeless in this country.”

“They’re not looking for Cadillac solutions here, they’re looking for basic, safe and secure solutions,” adds Neve, “this is a violation of human rights.”

The group has provided three options to city staff working on finding housing.  They’ve asked for a hotel, with storage, in the Centre-town area that can accommodate a stay of 30-days with an option to extend to 90-days if housing isn’t found.  If forced to stay in the wooded area, they’re asking for either a housing trailer or military tents, toilets and a power source.

Justin says the city did offer them a hotel stay in Vanier but the group turned it down, saying it’s too far away from their healthcare and community of Centre-town.

“Not one of us is willing to go there,” says Justin, “we’re all at different aspects of our (substance abuse) recovery, Vanier is drug central, they’re just trying to throw us into the dragon’s den.”

McKenney and Leiper has asked for another meeting Tuesday with city staff and residents to find a housing solution.  Residents like Todd Kelly, just want a safe place to call home.

“It’s stability you know,” Todd says from outside his tent, “I just want to live normally instead of having to live outside.”