Vintage Phones: A popular pick-up thanks to Kingston Ont.'s Oldphoneworks

Vintage Phones: A popular pick-up thanks to Kingston Ont.'s Oldphoneworks

It’s a business dialing back time in Kingston.

“The company is Oldphoneworks. We started about 22 years ago in a garage,” said General Manager Matthew Jennings.

“Over 20 years, it’s really ballooned into a great company to work for.”

Jennings answered an ad to do phone repair at Oldphoneworks a decade ago.

“I showed up and they’re telling me about the position and mentioned it was for antique phones rather than cell phones,” he laughed.

Now, he heads an enterprise preserving the phones of yesterday, for today and tomorrow. 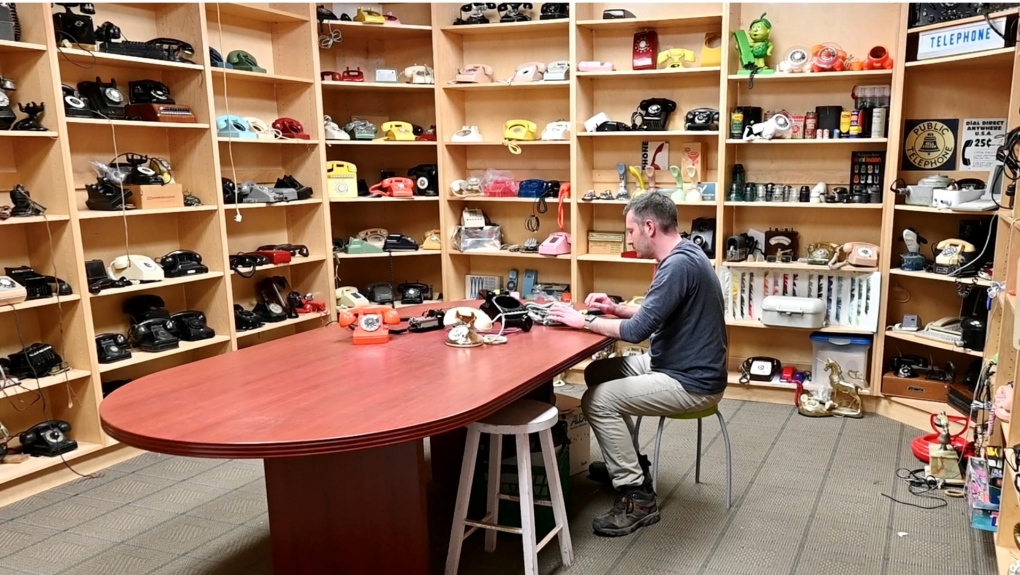 The General Manager of Oldphoneworks in Kingston, Matthew Jennings, repairs a vintage model in one of the company’s many rooms filled with vintage and antique phones. (Joel Haslam/CTV News Ottawa)

The market for vintage phones—particularly from the 1950s and 1960s—is hot right now. Customers are calling in orders for rotary dial phones painted in flaming orange, olive green and bright blue.

“The most popular is a variant of the Western Electric 500 which is a common phone from fifties, sixties and seventies with all the vibrant colours. Those phones are extremely popular for customers right now,” said Jennings.

Customers can plug the phones into their landlines, or have them Bluetooth-adapted to use with their cell phones.

“We do have a device that can be attached to the phone and basically it connects via Bluetooth to your cell phone. That way, you can make and receive calls on a vintage phone, without having a separate line coming out of the house from a telephone provider,” said Jennings.

Jennings says he can’t fully explain why vintage phones have again become so popular, but he guesses it’s pandemic related; people craving simplicity and the comfort of nostalgic memories.

“It wasn’t until the last couple of years that it really exploded, as far as sales go for us,” said Jennings.

“When you talk to someone on a corded phone, you can’t go anywhere. Your sole purpose is talking to a person on the other end, so you can really get a good conversation going with someone.

“The most common reason I hear is ‘that’s the one I had growing up.’ So, it brings back a lot of memories for people.”

The phones sold here are fully refurbished by a team of experts at Oldphoneworks.

None of them ever expected to be breathing new life into antique phones.

“Never, but it’s worked out to be great. I love it,” said Jeff Martin. 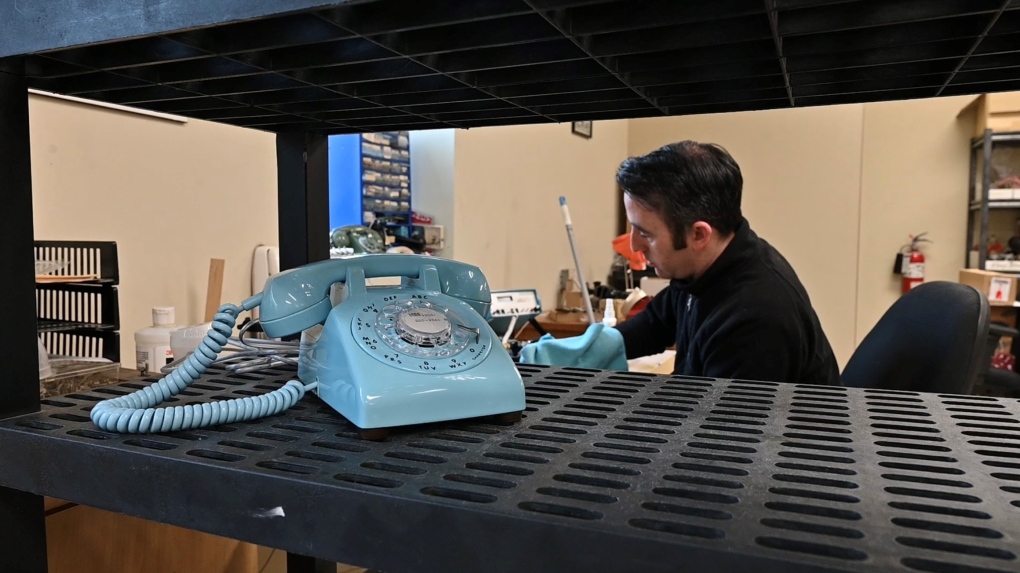 Jeff Martin refurbishing a phone in a workshop at Oldphoneworks in Kingston. (Joel Haslam/CTV Ottawa)

Martin’s been with the company for eight years. He works busily at a machine creating antique telephone cords.

“So, right now, we’re taking the copper conductor and feeding it up through the machine and covering it in cloth, like they used to do back in the day,” said Martin.

The reproduction cords and other antique and vintage phone parts available at Oldphoneworks are in hot demand with collectors.

“The machine’s running pretty much eight hours a day, every day,” he said

“I ship them all over the world, as far as Australia.”

Michael Blair is also taking a shine to this nostalgic chapter of the past, using a polisher to remove blemishes from each phone. 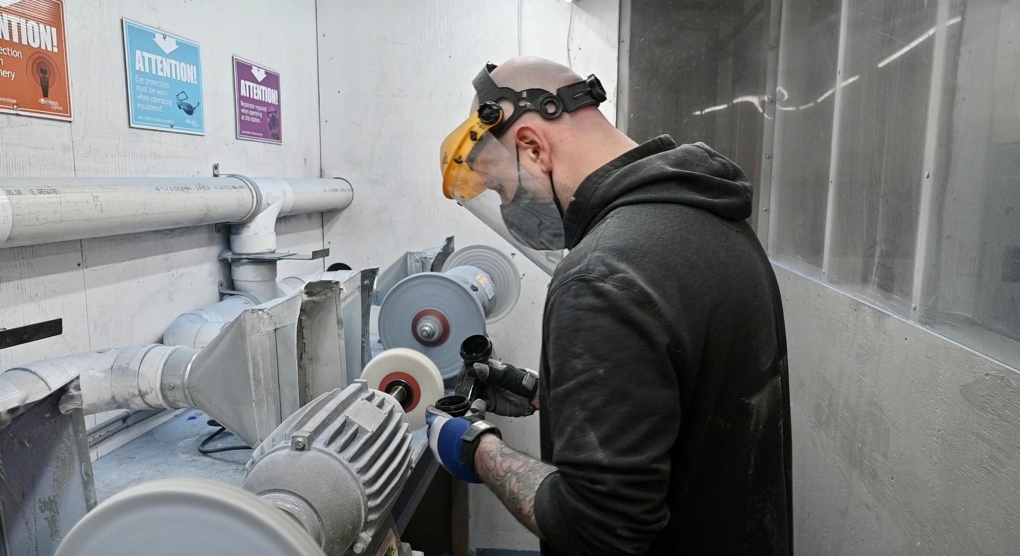 “I’m buffing out the imperfections in the antique plastics. Scratches, dents cigarette burns. I’m using buffing machines to bring the shine out of the product,” said Blair.

It’s a “product” he never actually used, or saw growing up, but he loves it.

“So, I’m kind of uniquely interested in this old technology. Getting to work with it hands on was amazing, so I jumped right in,” said Emerton.

Emerton has watched the market for vintage phones explode.

“These are very popular phones again. Yeah, it’s really blown up in the last few years.”

“We actually use vintage typewriters to type people’s custom dial cards and numbers onto their telephones. That’s a big request. Most people want their custom number, or a number they had growing up.” 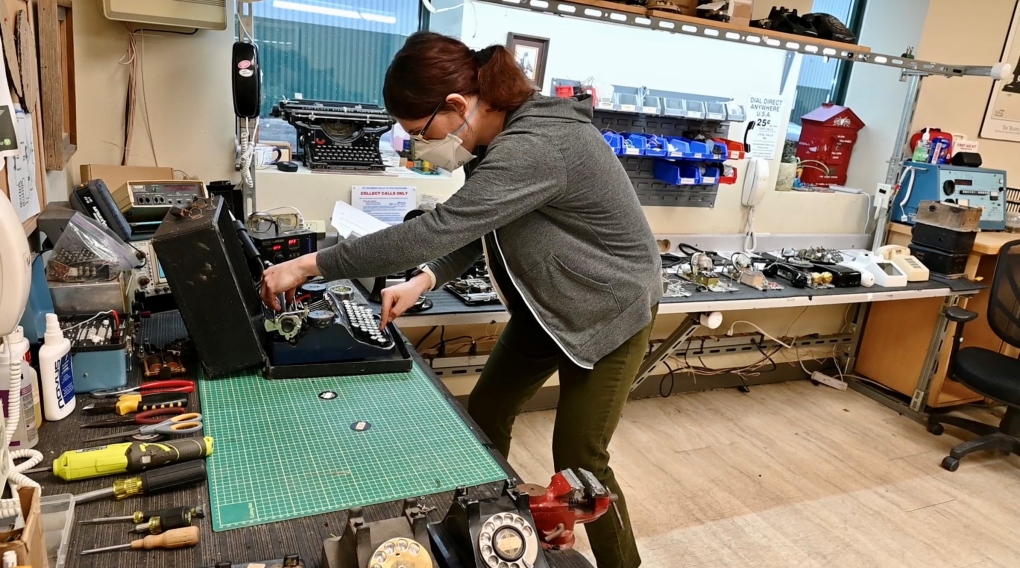 There are pieces from every era of history here. Oldphoneworks supplies many vintage and antique phones to the movie industry, ensuring the pieces used in a film fit the time period.

The company has outfitted a retro hotel as well.

“We supply movies shooting all over the world,” said Jennings.

“You name it, we got it,” said Jennings.

Perhaps the greatest novelty of all, said Jennings, is watching new generations trying to use a rotary dial.

“We have customers who specifically buy these phones so their children can see what it was like to dial phones back in the day. They always call back and let me know how it went and it’s always the same thing,” said Jennings.

“The kid came over to the phone and instead of trying to turn the rotary dial just puts his fingers through the holes and tries to dial. It’s the same thing every time and it’s wonderful,” Jennings laughed.