In combination, they have inspired a creative idea; urging you to take a seat at a table in support of local healthcare.

When a 150-year-old Burr Oak at the Queensway Carleton Hospital was blown over during a devastating storm last May, doctors, nurses and staff were heartbroken.

"The mighty oak stood tall and proud and came down right on the awning of our hospital’s west entrance," said QCH Foundation President and CEO Shannon Gorman.

"The storm took down an incredible piece of hospital history."

"It was a massive tree," said Katie Barrett, a Digital Fundraising, Marketing and Communications Associate at the QCH.

"The tree itself wasn’t just split in two; it was uprooted right out of the ground."

A short time after, Tim Holland and his wife Rachel were at the hospital preparing to give birth to their second child.

While walking the grounds to accelerate Rachel’s labour, Tim, a talented woodworker, saw the fallen oak, and boldly asked his wife, Rachel, to take his photo in front of it.

"I said, 'Look how big this is', and I got her to take a couple of pictures of me," he said chuckling.

"She wasn’t thrilled. But it all worked out in the end." 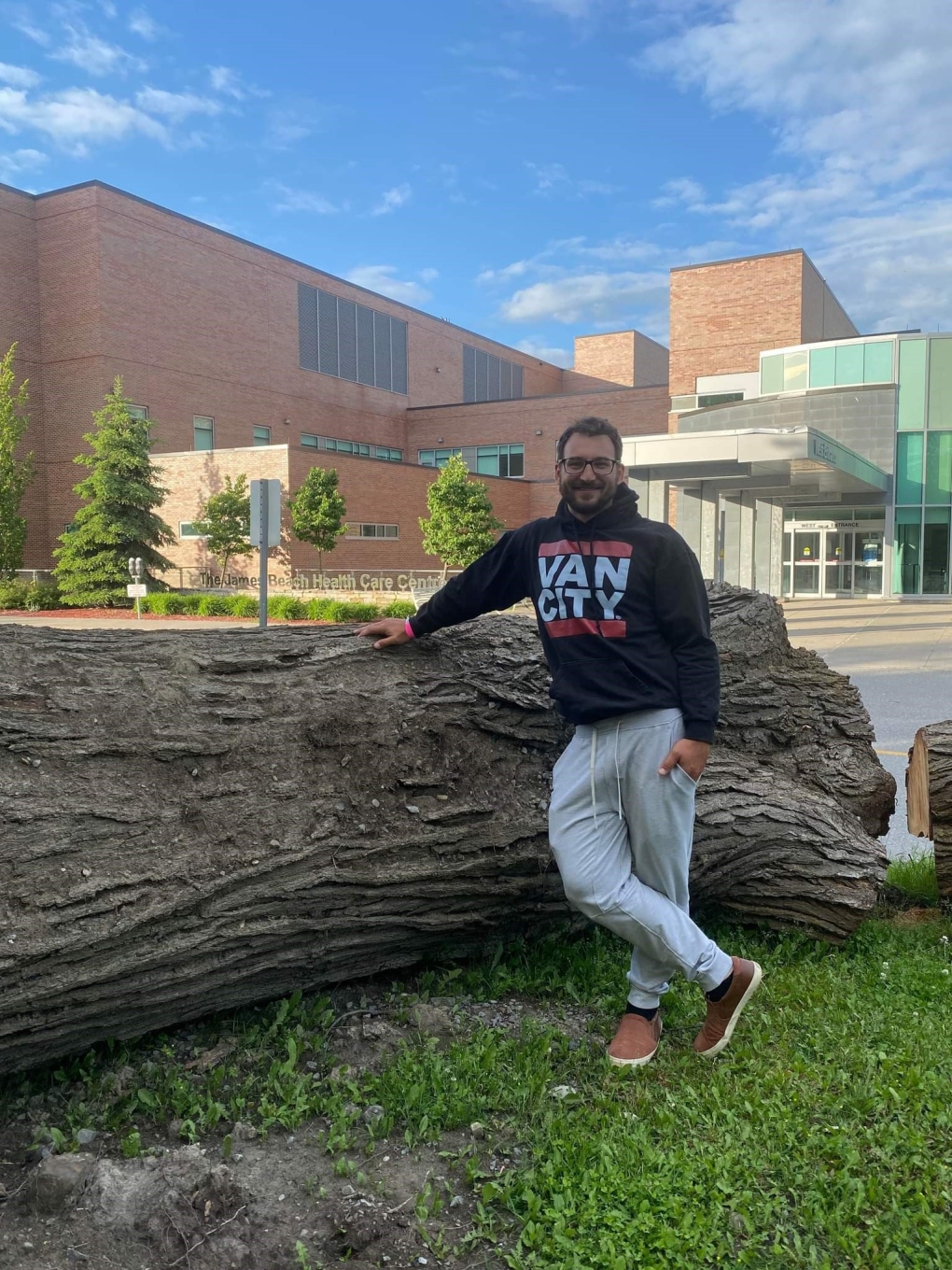 Tim Holland poses in front of the fallen Burr oak on the grounds of the Queensway Carleton Hospital. He is making a table using wood from the tree. It’s for sale in the “Hope Returns Online Auction” to support healthcare at QCH (supplied)

Hours later, Tim and Rachel welcomed a daughter, their second child to be born at the QCH.

Their time at the hospital also gave birth to a creative idea.  Tim couldn’t stop thinking about that beautiful old tree.

"There aren’t too many big, beautiful trees left in the city.  When one comes down, you have to do as much as you can to save the wood," said Holland.

"I was thinking it would be awesome to get it to my shop, or at least salvage as much of it as I could."

Holland wanted to do something to say thank you to healthcare workers for their tireless work in the face of so much adversity. And he wanted to show his gratitude to the QCH for helping to bring his two daughters into the world.

On Instagram, he posted the photo Rachel had taken of him with the tree and tagged the Queensway Carleton Hospital Foundation.

"And within an hour, they were calling me."

Tim and QCH team members came up with a plan for Tim to creatively use the wood, while supporting care at the QCH.

After sawing and milling the wood on the property, one of the giant slabs from the Burr Oak will be used by Holland to craft a stunning live-edge dining room table.

He would also fashion several charcuterie boards from smaller pieces of the tree.

The table, the boards, and several other items—from trips to sports packages—are being sold in the Queensway Carleton Hospital’s "Hope Returns Online Auction". Bidding is open until Oct. 26 at 9 p.m.

"That tree, but not for Tim, would have ended up in the wood chipper. It’s such a crucial piece of history for the hospital, and it’s so meaningful the way he’s turning it into something great for us," said Gorman.

"Tim is an incredibly skilled woodworker and this table will be a feature, a centrepiece, in someone’s home.  It’s a one-of-a-kind piece with lots of history behind it," she said.

"And 100 per cent of the proceeds will be going in support of equipment, thanks to the generosity of our sponsors."

"We’re a community hospital and when people come here they feel that true sense of community, and they really want to do what they can to give back.  And we’re so grateful," said Gorman. 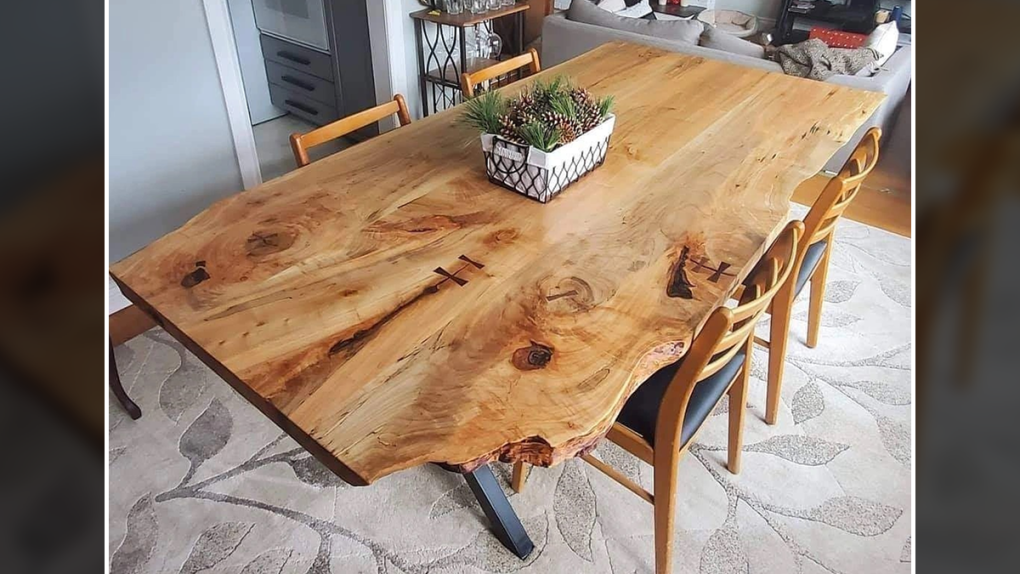 An example of one of Tim Holland’s handcrafted live-edge tables. He will be making a table similar to this, now available for sale in the Queensway Carleton Hospital’s “Hope Returns Online Auction” (supplied)

And Tim Holland is grateful for the chance to use his gifts to say thanks for everything the QCH has done for his family.

"It was an important tree for the hospital.  Every nurse or doctor seems to have a story about sitting under that tree, or walking by it every day. It was there before the hospital was even built," said Holland.

"It would have been very disheartening to see that tree go into a chipper.  Both my daughters were born at the QCH, I have been there many times, so has my family.  It’s great to be able to help out when we can."

How will the WHO's decision on COVID emergency declaration affect Canada?

Next week, the WHO will decide if the COVID-19 pandemic is still a global emergency. Public officials say this decision will be important as they urge Canadians to get boosters and to stay vigilant.

The family of a man who fought and died in the First World War say they thought they were being scammed at first when they got the call asking for a DNA sample to identify their distant relative.

Legault accuses Trudeau of attacking democracy and the Quebec people

Quebec Premier François Legault accused his federal counterpart Justin Trudeau on Saturday on social networks of "attacking democracy and the entire Quebec people" by wanting to weaken the capacities of the Quebec national assembly.

Dolphins are swimming their way back to New York City's Bronx River for the first time in over five years.

Instagram rolls out 'quiet mode' for when users want to focus

The FBI searched U.S. President Joe Biden's home in Wilmington, Del., on Friday and located additional documents with classified markings and also took possession of some of his handwritten notes, the president's lawyer said Saturday.

Buckingham Palace on Saturday revealed details of King Charles III's coronation, set to be less extravagant than his mother's ceremony 70 years ago, in a reflection of the cost-of-living crisis many Britons are enduring.

Grammy-winning rapper Young Thug and a racketeering co-defendant conducted a hand-to-hand drug transaction during a court hearing, prosecutors said in a motion filed in Atlanta.

The federal government has come to a $2.8-billion agreement to settle a class-action lawsuit brought by two British Columbia First Nations related to the collective harms caused by residential schools.