Many drivers across the capital have been in for a bumpy ride over the last few days and the problem plaguing commuters is only going to get worse.

According to the city of Ottawa, crews have filled more than 10,000 potholes since January 1st, 2018. That's down from the roughly 20,000 they filled this time last year but drivers say the craters appear bigger than before.

"They are terrible," said driver Ruth Mester. "It seems to be an Ottawa wide illness."

Big potholes have been reported from Ridge, Ramsayville and Renaud Roads in the east-end to St Patrick and Colonel By downtown and Woodroffe Avenue in the west-end.

"It's far worse than last year but it's probably because of the mild weather and the freezing," said Mester.

Unfortunately, avoiding a pothole isn't always possible. Hitting a pothole can cost upwards of $2,000 dollars if your rims and wheels are damaged beyond repair.

Today alone 38 city crews were out filling potholes in an effort to keep drivers from paying hefty bills.

Crews start by clearing any debris and water out of the pothole before filling it with a cold patch asphalt and flattening it to a smooth finish.

"As soon as this is done, it is driveable and cars driving over it actually help it compact," said Bryden Denyes an area road manager for the city of Ottawa.

Potholes occur when water seeps into the pavement, freezes and then thaws leading to cracks into the road surface.

Have you spotted a pothole?

Take a photo and add it to our map. 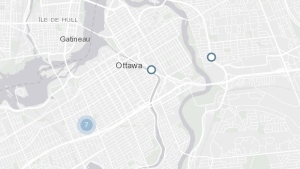