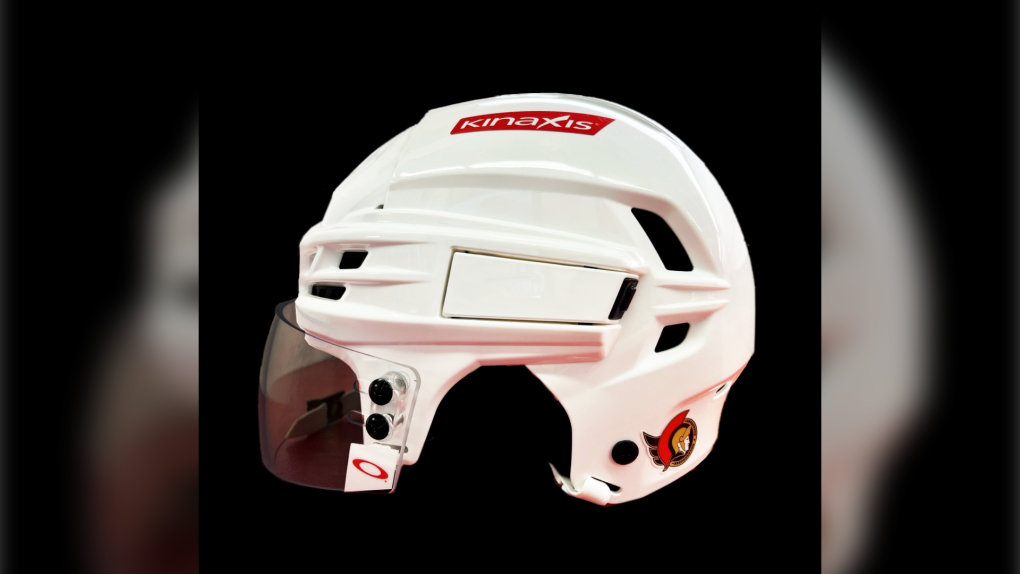 The Ottawa Senators have announced that the team's white road helmets will include the Kinaxis logo for the next three seasons. (Ottawa Senators/supplied)

The Ottawa Senators will have a sponsor on their helmets for the next three seasons when playing on the road.

The Senators announced a partnership with Ottawa-based software company Kinaxis to have their logo emblazoned on players’ white road helmets through the 2024-25 season.

The Kinaxis logo will be displayed on the Senators helmets for the first time on Oct. 13, when the Sens visit Buffalo, N.Y. to face the Sabres in their regular season opener.

“This represents an exciting new partnership with a local success story that operates on the global stage,” said Senators president of business operations Anthony LeBlanc in a news release. “We share common philosophies towards partnering for success, investing in our community and positive employee engagement and look forward to working with Kinaxis for many years.”

Kinaxis's headquarters is located on Palladium Drive, a short distance from the Canadian Tire Centre. The company makes supply chain management and sales software for large corporations. It went public in 2014 and is listed on the Toronto Stock Exchange.

“On behalf of the hundreds of employees based in Ottawa, it is a privilege to partner with such an amazing team,” said Kinaxis CEO John Sicard.

NHL teams have been including sponsorships on players’ gear this season. The Toronto Maple Leafs announced the word “Milk” would appear on jerseys in partnership with the Dairy Farmers of Ontario. RBC is the sponsor on Montreal Canadiens jerseys.

Help will arrive at the children's hospital in Ottawa next week as it continues to see "unprecedented volumes" of young patients suffering from respiratory viruses. A team of staff from the Red Cross will begin working at the hospital in the next week.

Montreal Canadiens goalie Carey Price has taken a stance against Ottawa's controversial Bill C-21, which would refine the definition of prohibited assault-style firearms -- drawing the ire of Canadian hunters who say the definition would outlaw weapons used within their practice. Meanwhile, the Liberals have repeatedly stated their intention is not to go after hunters but to restrict certain firearms designed for the "battlefield."

Girl Guides of Canada is asking its members to vote on two new name options for its Brownies program -- comets or embers.

Intergovernmental Affairs Minister Dominic LeBlanc says the federal government is taking a wait-and-see approach to whether it may intervene when it comes to Alberta Premier Danielle Smith’s sovereignty act, but that it is not the focus at the moment.

Peel police have identified the 21-year-old woman who was fatally shot outside a Mississauga gas station overnight.

The British government is looking at bringing in the military to help keep public services running if key workers, including in the state-run National Health Service, take strike action, the chairman of the governing Conservative Party said on Sunday.