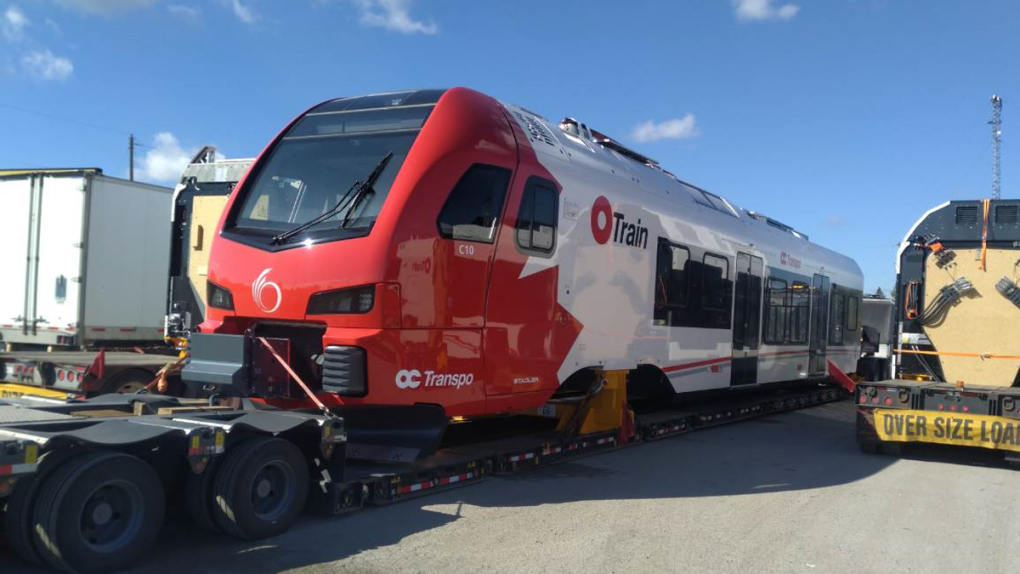 Ottawa's new LRT Stadler FLIRT trains sit on flatbed trucks in a parking lot in Johnstown, Ont. on the final leg of the trip to the capital. (CTV News Ottawa viewer photo)

OTTAWA -- Some of Ottawa's new LRT Stadler FLIRT trains have been spotted in a parking lot in eastern Ontario on the final leg of the journey from Switzerland to Ottawa.

The new diesel trains will run on the North-South Light Rail Transit Line from downtown Ottawa to Riverside South when it opens next year.

A CTV News Ottawa viewer snapped a photo of the LRT trains on flatbed trucks in a parking lot in Johnstown, Ont.

The train was shipped from Antwerp, Belgium to Newark, New Jersey, then driven by truck through New York State to Ontario.

"The vehicle was separated into modules and the modules will arrive via separate truck shipments to Walkley Yard, offloaded via crane, and then reassembled at the site," said Michael Morgan, Director for Rail Construction Program.

"Further details on the route that was taken can be provided in the coming days.”

Ottawa purchased seven, four-car multiple units from manufacturer Stadler for the north-south Light Rail Transit line from Bayview Station to Riverside South, with a link to the Ottawa International Airport.

The Stadler FLIRT trains are 80 metres long and can carry 420 passengers.

Construction is scheduled to be completed in 2022 on the expanded O-Train Line 2 from Bayview Station to Limebank Road.

And they’re off! The first Stadler FLIRT train has left the manufacturing plant in Switzerland and is making its way to Ottawa. These larger trains will run on the #Stage2SouthExtension connecting more residents to #OttLRT #Stage2MajorProgress pic.twitter.com/GOn1Wx5aMd