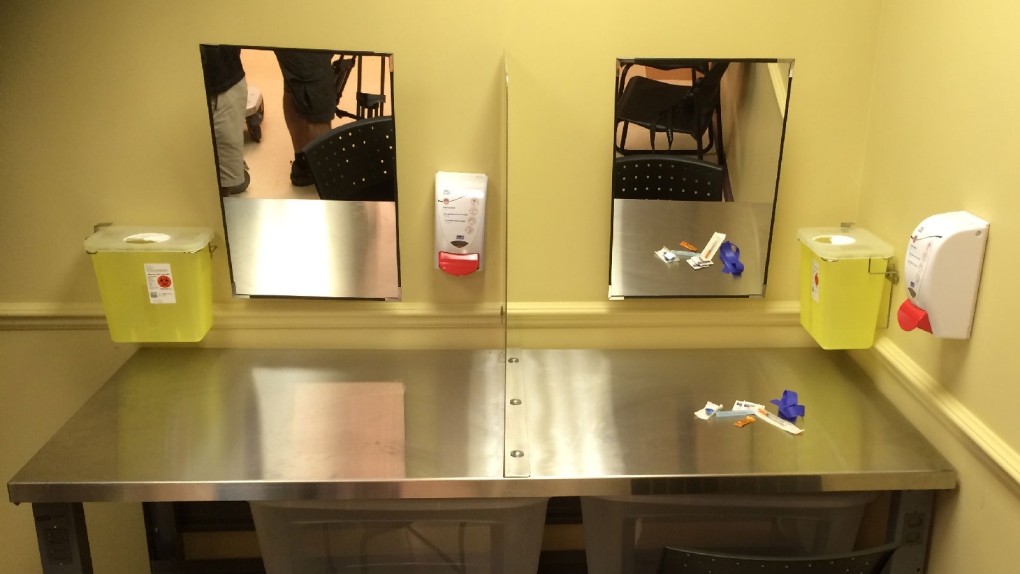 Two booths are seen at the temporary supervised injection site on Clarence St. in Ottawa that opened on Tuesday, Sept. 26, 2017.

The City’s Board of Health has approved a recommendation to make the supervised injection site at 179 Clarence Street permanent.

The site, which is run by Ottawa Public Health in partnership with the Sandy Hill Community Health Centre, began operating in September as an emergency stop-gap measure. The Sandy Hill CHC did not have its Health Canada-approved site up and running at the time (it still doesn’t) and an unsanctioned pop-up site had begun operating in a Lowertown park.

But Ottawa Public Health says they’ve seen over 2,700 visits since then and have 174 regular users. They want to make the site permanent, to be run by OPH, and to expand the supervised services the site can offer and will appeal to Health Canada for approval to make that happen.

In an email, OPH spokesperson Eric Leclair says a third booth and an after-care area will be added to the site, and they’ll be expanding the ways clients can use drugs under supervision.

“The Health Canada exemption application will be for injection, oral and intranasal (snorting) consumption,” Leclair says. “It will not cover smoking substances at this time.”

Leclair says OPH will be seeking funding from the Province to aid in this expansion.

“We will be requesting 100% Provincial funding for both capital renovation costs and ongoing base funding for operations,” he says. “We are currently working with our partners at the Ministry of Health and Long-Term Care to finalize this submission, which will include the funding ask. As a reference, the interim SIS is costing approximately $75,000 a month and we anticipate the costs for the permanent location to be similar.”

This comes as new numbers show a rise in overdose cases in Ottawa . Numbers in a report presented to the Board of Health show there were 387 overdose-related hospital visits in 2017, compared to 258 in 2016.