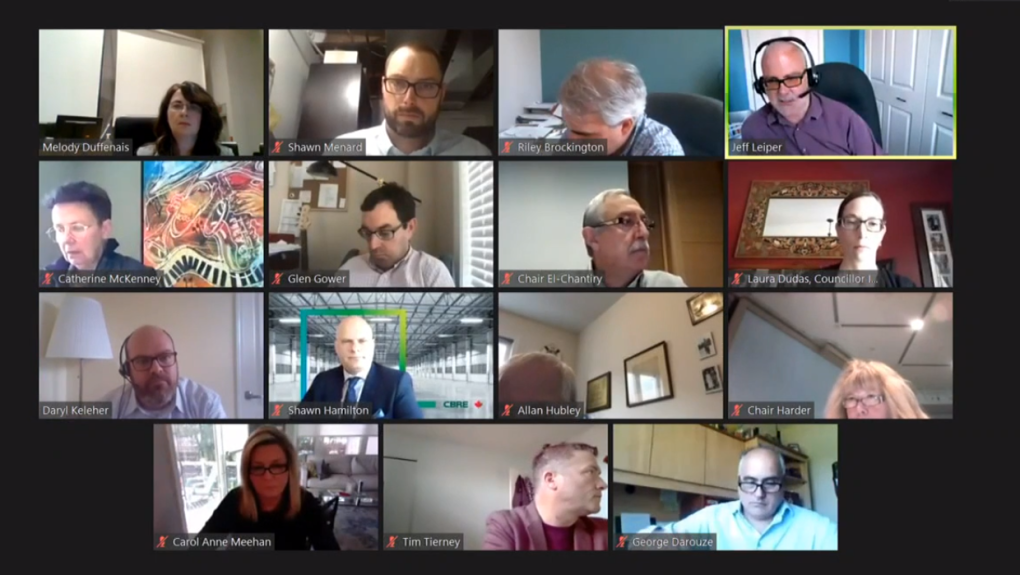 The joint meeting of the Planning and Agriculture and Rural Affairs committees held on Zoom on Monday, May 11 (pictured above) and Tuesday, May 12 was the 'litmus test' for whether or not other committees could host similar meetings. (City of Ottawa / YouTube)

OTTAWA -- Ottawa City Hall is looking at ways to return to a normal level of function and Zoom appears to be how they're going to do it.

Speaking at City Council Wednesday, which was held by teleconference like other council meetings during the pandemic, City Clerk Rick O'Connor said he now believes his office can accommodate standing committee meetings using Zoom.

The decision comes after Monday and Tuesday's marathon joint sessions of the planning and rural affairs committees, during which dozens of members of the public called in to speak.

"The joint meeting was more or less the ultimate litmus test as to whether or not my office could host and support a public meeting and have residents provide their submissions live via technology," he said.

Monday's Zoom call of the joint meeting lasted more than 10 hours and Tuesday's was about eight hours long.

O'Connor said the successful navigation of those meetings, for which he said he received several accolades from staff, gave him the confidence that other meetings could go ahead online.

"I'm of the view now that my office can engage all committee chairs and their respective general managers and begin the resumption of regularly scheduled virtual meetings via Zoom technology so that we can continue to have live submissions from residents and delegations."

O'Connor said committee chairs should still consider the pandemic's impact on staff's capacity to prepare reports as they build their meeting agendas.

One committee is already planning a meeting.

Kanata South Councillor Allan Hubley, who chairs the Transit Commission, said there will be a special meeting June 1 to discuss OC Transpo's pandemic recovery plan. The transit service has seen a precipitous decline in fare revenues during the pandemic, creating a major hole in the City's budget. At least nine OC Transpo employees, including bus drivers, LRT ambassadors, and maintenance staff have contracted COVID-19.

Hubley also indicated the scheduled Transit Commission meeting for June 17 was likely to go ahead.

Several committee meetings have been cancelled during the pandemic and City Council meetings have been held via teleconference with only the mayor in the council chamber in many cases. In addressing the cancellation of transit meetings for March, April, and May, Hubley said he, like other committee chairs, had no choice.

"The rules were clear; we needed statutory requirement or a time-sensitive report. That was our threshold. Councillors and commissioners were still able to ask questions and get answers on a daily basis," he said.

Montreal to Ottawa rideshare driver may have been exposed to COVID-19: Ottawa Public Health