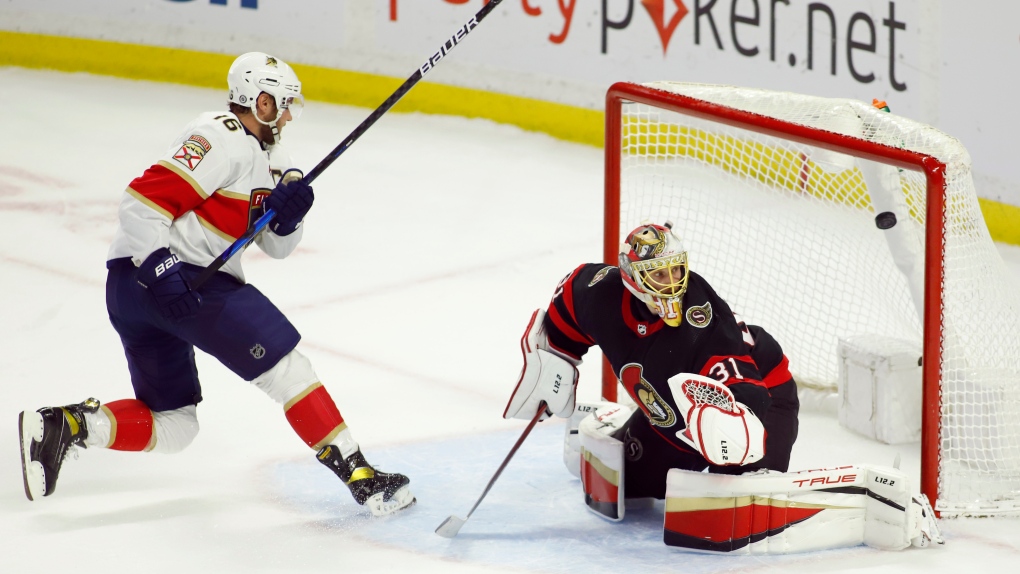 The Ottawa Senators were forced to settle for a single point after a 4-3 shootout loss to the Florida Panthers Saturday night, but knew they were lucky to walk away with anything.

The Panthers came in waves from start to finish and gave the 17,201 at Canadian Tire Centre a firsthand look at why they lead the Eastern Conference.

Florida trailed all game until Aleksander Barkov tied it late in regulation and went on to score the shootout winner.

Ottawa had an opportunity in overtime on the power play but just couldn't beat Sergei Bobrovsky, who made 19 saves. At one point Senators coach D.J. Smith had four forwards on the ice.

"If you're a Senators fan that's pretty exciting to watch Timmy (Stutzle) flying out there with scoring chances up and down," said Smith. "It's a coach's nightmare, you want a little less than that, but as a fan these are the stars of the futureΓÇªI remember Barkov when he was this age and he was a good player, but he isn't what he is today."

Trailing 3-2 the Panthers sent the game to overtime when Barkov scored the equalizer with 2:16 to play to complete the comeback.

"We just have the mindset that we're going to come back no matter what," said Barkov. "We played a good game even when we were downΓÇª nobody had one thought that we weren't going to win this game."

Anthony Duclair and Patric Hornqvist also scored for Florida (44-14-6), who are 8-1-1 in their last 10. Newcomer Claude Giroux had two assists.

In many ways Anton Forsberg deserved a better fate after stopping 46 shots for the Senators (23-36-6).

"That's a really, really good hockey team," said Smith. "But you know, we stayed with it long enough, we checked enough and Forsberg... let's make no mistake (about) how good he was."

Smith also said the team likely wouldn't have played as well as it did without the support from the fans.

Ottawa had its biggest crowd of the past two years and the noise in the building gave the Senators momentum.

"This is probably the best lineup in the league," said Forsberg. "Obviously that's the teams you want to compete with and that's the fun games to play so it was fun to be out there."

Alex Formenton, Artem Zub and Dylan Gambrell scored in regulation for the Senators (23-36-6). Drake Batherson picked up an assist in his return after missing 28 games with an ankle injury.

The turning point seemed to come midway through the second.

Ottawa had taken a 3-0 lead early in the second on Gambrell's goal and then the Panthers were able to get on the board with a power-play goal. Giroux found Duclair, who one-timed it for his 26th of the season at 8:55.

Just over a minute later Hornqvist carried the puck down low and backhanded it towards the net where Forsberg made the initial save, but Hornqvist was able to grab the rebound and pop it in at a very sharp angle.

Forsberg appeared to make an impressive behind the back save along the post, but after a lengthy review it was ruled the puck was in his glove behind the goal line to make it a 3-2 game.

Forsberg said in the moment he didn't even know if the puck was in his glove, but then felt he had made the save and was somewhat surprised it was ruled a goal.

During his media availability Forsberg was shown a picture shared by the NHL and admitted they made the right call after seeing the closeup.

"I saw the monitor a few times and thought it was in," said Panthers coach Andrew Brunette. "Took longer than I thought it was going to take, but I guess they wanted to make sure."

Despite being outplayed and outshot 19-8 the Senators held a 2-0 lead after the first period.

Formenton opened the scoring at 7:54 after winning a foot race and burying a shot under the crossbar.

Ottawa made it 2-0 when Zub picked up a Josh Norris rebound at the hashmarks and wristed a shot past Bobrovsky for his first on home ice this year.

NOTES: Adam Gaudette was a healthy scratch for the Senators... Jonathan Huberdeau played his 655th game with the Panthers.

This report by The Canadian Press was first published March 26, 2022.