The City of Brockville held a small ceremony to mark Canada's 155th birthday on Friday, while also welcoming a second festival to the waterfront on back to back weekends.

"We've been off for a couple of years and we might be a little but rusty, but most people won't notice that I hope," Pipe Major Stewart Nimmo said.

"It's nice to have people watching us. I mean the purpose of the band is to entertain and if we entertain them, great," he added.

The band led the way, beginning at 11:45 a.m. in front of Brockville City Hall, followed by a march of the Scarlet Clad Infantry re-enactors, representatives from the Brockville Rifles, war veterans and local dignitaries.

The Markovic family, visiting from Toronto, one of many who lined King Street.

"We came to watch the parade and go for a swim, hang out with grandparents, it's nice," the father said. 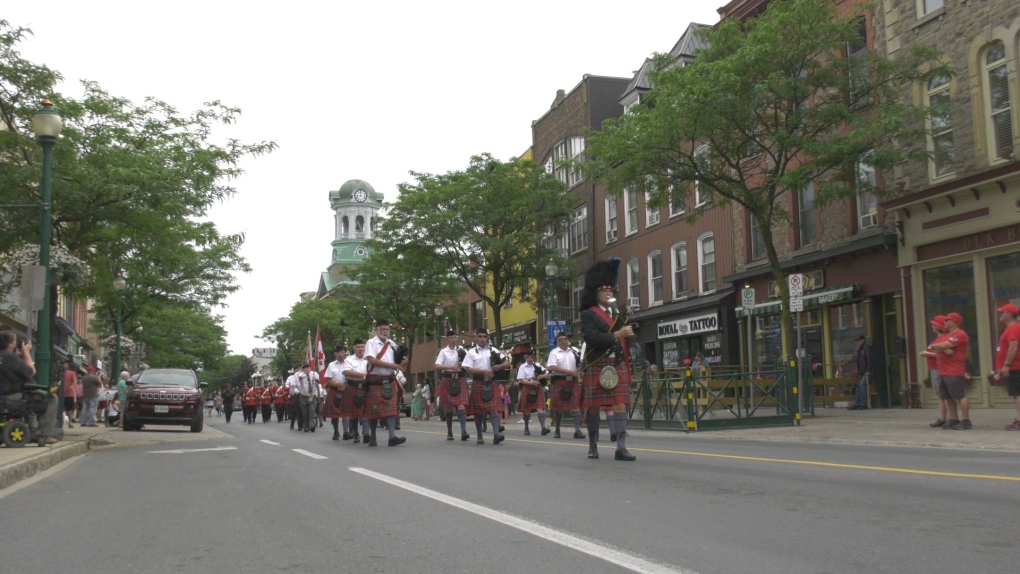 In front of the courthouse, the National Anthem was sung with help from the few hundred people in attendance.

Brockville Mayor Mike Kalivas then gave a small speech thanking those in the crowd, before noting everyone still has a part to play in making this county better.

"We as a county are strong, but we're not perfect. We have much healing to do and we have inclusiveness still to achieve," Kalivas said.

"We all have a part to play in achieving these goals. Each of us has a contribution to make in these regards," he added.

"I thank you all for your community spirit and for your continued kindness to each other. It's most important that you keep doing that."

The Matteson family also on hand, recently moving from Buffalo to Brockville.

"We're just excited here for our kids to join in the Canadian celebration," said Gina. "We now live in beautiful Brockville and my children are now Canadian citizens and we're here to celebrate on Canada Day."

The event ended with free cupcakes for those who attended. 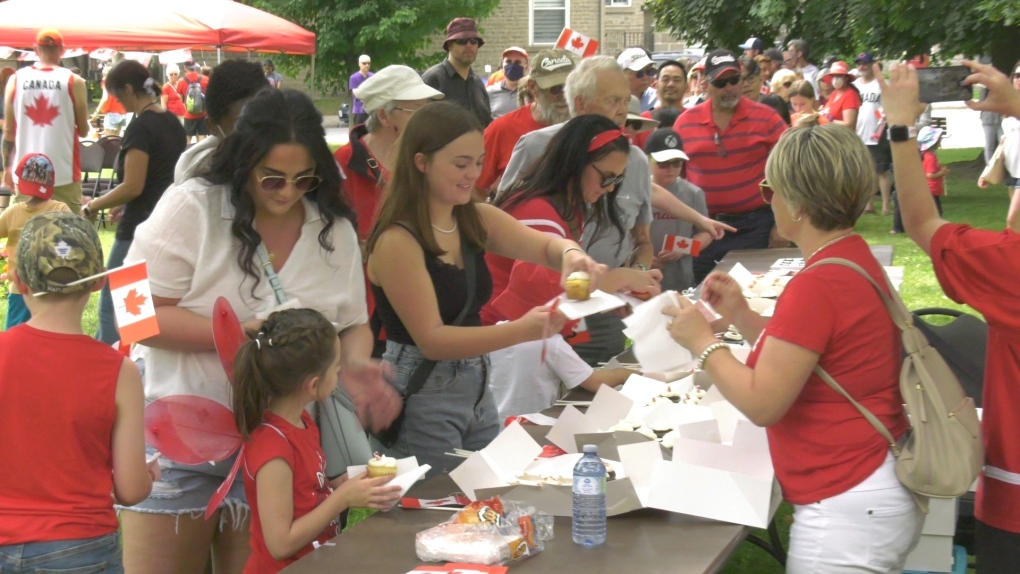 Meanwhile down at the waterfront, crews were busy putting the finishing touches on the 1000 Island Regatta, the third stop on the HRL tour schedule.

He said the committee's plan was to incorporate a little something for everyone, from bouncy castles to high-speed racing.

"A lot of the places we go it's just solely a boat race and we wanted to make this a festival environment for families to bring kids down," Armstrong said.

"Kids 12 and under are free, we have the kids zone and beer gardens, food vendors, craft vendors, to make it a truly festival experience," he added.

The festival entertainment kicks off Friday night with the Road Apples, a Tragically Hip tribute band. 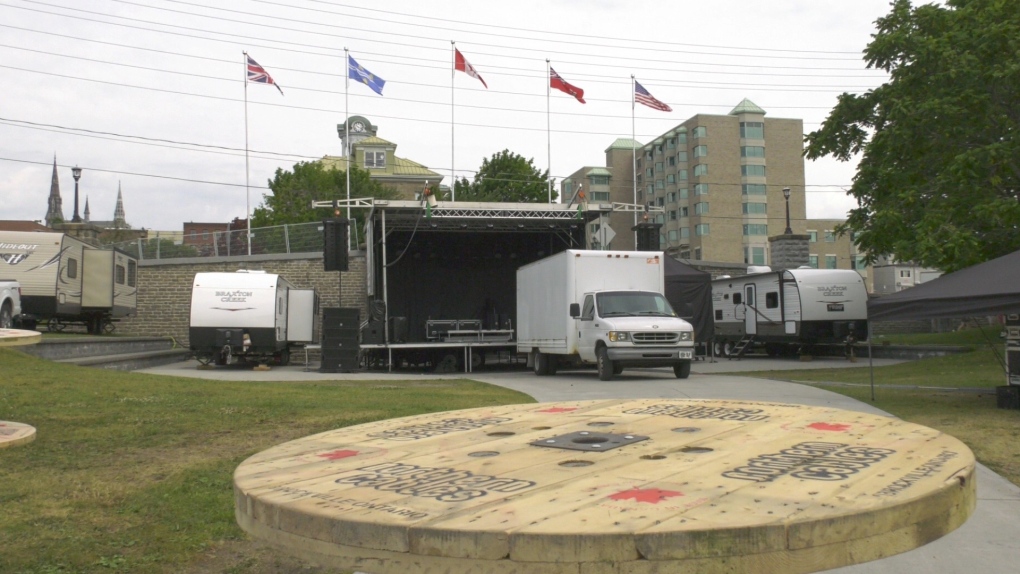 The stage is set for performances at the 100 Islands Regatta this weekend in Brockville. (Nate Vandermeer/CTV News Ottawa)

Kim Mitchell was slated to play on Saturday night, but a late cancellation on Thursday had committee members scrambling to fill the slot, replacing him with Raine Maida, formerly of Our Lady Peace, and Chantal Kreviazuk.

"Our committee did really good work reeling in another act on short notice," Armstrong said. "It was out of everybody's control, it was an issue and cancellation through Kim, but you know I'm sure he hates it as much as us."

"So we were lucky enough to bring in a huge national act with two superstars and we're pumped to have them here in Brockville," he added.

Racing begins at 10 a.m. Saturday and the event runs through Sunday with more racing and entertainment Sunday night. 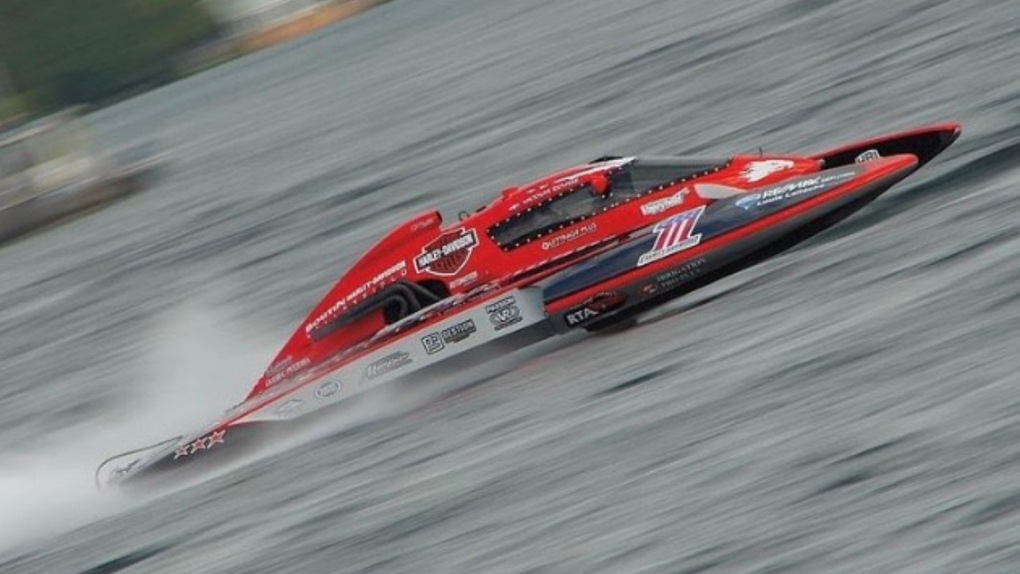 Racing at The 1000 Islands International Regatta and Festival in 2017. (Nate Vandermeer/CTV News Ottawa)

A weekend pass is $60, which includes all shows and races both days. A Saturday only pass is $40.  Single day passes are available for $10, while Friday nights entertainment pass is $15. Pit passes are also available.

The city of Brockville fireworks show is scheduled for 10 p.m. on Friday.

"I've seen people dressed in all their Canada Day gear early today," Armstrong said. "We take pride in our country, so it's awesome to be able to do something like this in our hometown on Canada Day, so we're really looking forward to kicking this thing off."

"It's been two and a half years, let's make it an awesome weekend and I look forward to seeing everybody," he said.

Gates opened on Friday at Blockhouse Island at 1 p.m.

A fire ripped through a packed Coptic Orthodox church during morning services in Egypt's capital on Sunday, quickly filling it with thick black smoke and killing 41 worshippers, including at least 10 children. Fourteen people were injured.

Antarctica ice melt is accelerating, and research says an overlooked coastal current is to blame

A new study suggests that Antarctica’s ice shelves may be melting faster than previously believed, which is causing sea levels to rise at a more rapid pace and accelerating the dangers of climate change.