‘We just have to be optimistic:’ Farmers pray for rain as temperatures soar and crop losses mount

“We’re into an extreme drought.,” he says, looking at the dry field.

“We’ve not had significant rainfall the last six to seven weeks that actually amounts to something. It’s getting into a desperate need for any kind of moisture to come.”

His wheat crop is roughly at 80 percent maturity, and harvest is just a couple weeks away.

“It’s in the grain-fill stage and as it doesn’t have any moisture it cannot fill the grain so what that is going to do is reduce yields significantly.” Haerle said.

“Look at the bottom of the plant. It’s all started to turn yellow and that means the conduit of water going up the plant is basically already dead, so that's not going to draw any more moisture. Even if we were to get an inch, two inches of rain this plant is basically finishing off.” he adds, discouraged.

The field here is so dry, you can see up to three-centimetre cracks in between the rows. 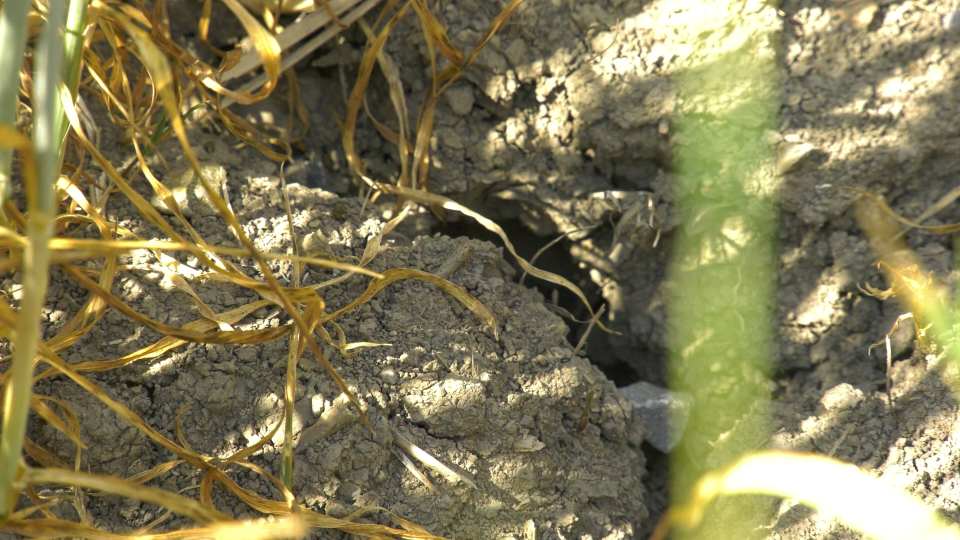 Haerle estimates yield loss for spring grains in the area will be between 20 to 50 percent.

“We grow crops now that are quite drought-tolerant. They can actually handle drought stress up to a certain degree....But there is a point of no return and this is where we are at with the wheat crop. There is no point of return anymore.”

Haerle is also chair of Grain Farmers of Ontario, and says the whole province is seeing a drought, but it’s at different stages in different areas.

Near Carleton Place, soybean and corn crops are also feeling the effects of the record heat.

Kevin Stewart of Ottawa Valley Grain Products in Carp, a company that has been around since 1929, says farmers in his area are worried as well.

“Beans would be the most resilient to the drought conditions but grain particularly right now, grain needs that rain in the next say week or two,” Stewart says, squinting in the sun.

His mill deals with specialty grain products like red barley that are then turned into flour.

“For the food products that we are making, we want big full kernels—plump kernels that are good for milling. Certainly what I’ve heard from farmers is that we really need the rain in the next two weeks or those losses are going to be a guarantee.” Stewart said.

Farmers he has contracts with are looking at a 10 to 15 per cent loss in grain yields, which means Stewart has to fill that void.

“I’ll go out and find more farmers to work with or possibly buy grain a little further outside of the Ottawa Valley bubble.” he said.

“The drought conditions are just one additional stress that is on farmers,” he said. “They’re already impacted like everyone else with COVID its just they have another thing they need to worry about and making sure that they are making money from their investment thy have in the ground.”

Back in St. Isidore, Haerle heads over to his cornfield to see how its faring.

“The corn and soybeans still have a long way to go before they actually going to put the crop on its plant so there is still a lot of optimism about that.” he says, looking at the staggered height of the plants.

“We just have to be optimistic and hope that Mother Nature is going to bring us a few days of nice steady rain,” he said. “What we need is a steady, slow rain for about two or three days overcast, that would be perfect.

“In situations like this, we always like to have nice weather but Mother Nature also needs to supply water for the crops that we grow so that the consumer can eat something. There is a tradeoff.”