Wayward waterfowl: OPP rescue ducks on the 401 near Brockville 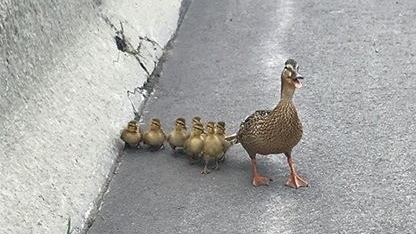 AUGUSTA, ON -- OPP came to the aid of a family of ducks attempting to cross the 401 on Sunday.

In a tweet, East Region HQ says Grenville OPP officers stopped to help the wayward waterfowl get off the major highway near the Maitland Rd. exit, east of Brockville.

The ducks were trapped against a median barrier.

According to the tweet, the birds were rounded up and escorted to safety.

#GrenvilleOPP members stepped up to help ducks in danger on Sunday. They had gotten trapped against the median barrier on #Hwy401 WB at Maitland exit. The ducks were rounded up and escorted to safety. pic.twitter.com/Oc7JqIfpbe

Drivers are advised not to stop to help animals on busy highways.