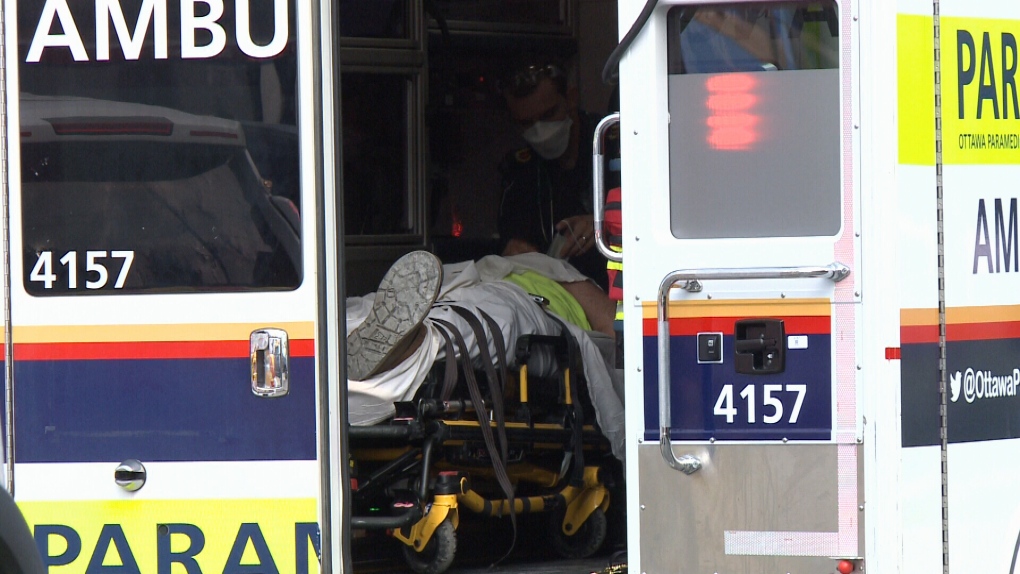 A person is loaded into an Ottawa paramedic ambulance after being injured on the fifth floor roof of a construction site on Cummings Avenue, requiring a rope rescue to get them down to the ground. June 28, 2022. (Jim O'Grady/CTV News Ottawa)

Ottawa Fire Service rope rescue crews responded to two separate calls Tuesday for rope rescues, one high up, and one low down.

Ottawa paramedics say a construction worker was taken to the trauma centre after they were hit by a metal object at a worksite.

Ottawa paramedics and firefighters were called to the construction site on Cummings Avenue between Burleigh Private and Snow Street just before 8 a.m. Tuesday. The worker was on the fifth floor’s roof and needed to be brought to the ground by an Ottawa Fire Service rope crew.

Firefighters used a crane on site to bring a basket up to the roof so that the worker could be safely lowered to the ground.

Ottawa paramedics said the worker’s injuries are not considered life-threatening.

Thank you for your valuable assistance! Patient suffered non-life threatening injuries and is currently on the way to @ottawatrauma under the care of our paramedics. #ottnews https://t.co/Ajn3U4rr36 pic.twitter.com/mmygrKEchl

There was a second rope rescue Tuesday morning when someone fell down an embankment near Parliament Hill.

Just before 9 a.m., an individual walking on a path behind Parliament fell down the embankment near West Block.

The individual could not get back up and so a rope rescue team used a basket to help lift them back up to the path.

@OttFire Rope Rescue team responded & was able to locate the individual down the embankment. The patient was loaded into a stokes basket & safely carried up & out of the slippery embankment & patient care was transferred to @OttawaParamedic. #OttNews pic.twitter.com/UrzPX1GgUq