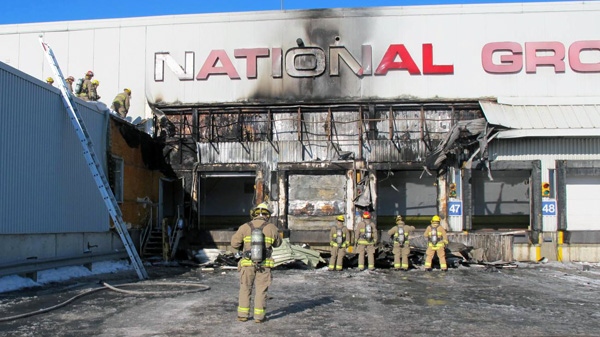 A two-alarm fire that started in a trailer parked outside a warehouse in east Ottawa caused half a million dollars in damage and sent one firefighter to hospital with minor burns.

The fire spread to another trailer and the exterior of the National Grocers building on Sheffield Road late Thursday morning.

Firefighters say the flames destroyed the first trailer and its contents, while the second trailer sustained some fire damage.

Crews managed to spare the inside of the warehouse from flames, but some areas were damaged by smoke.

One firefighter was sent to hospital to be treated for minor burns caused by embers. He's since returned to work.

Firefighters say the fire may have been caused by sparks from a machine being used to repair the trailer. However, the exact cause of the fire has not been determined.