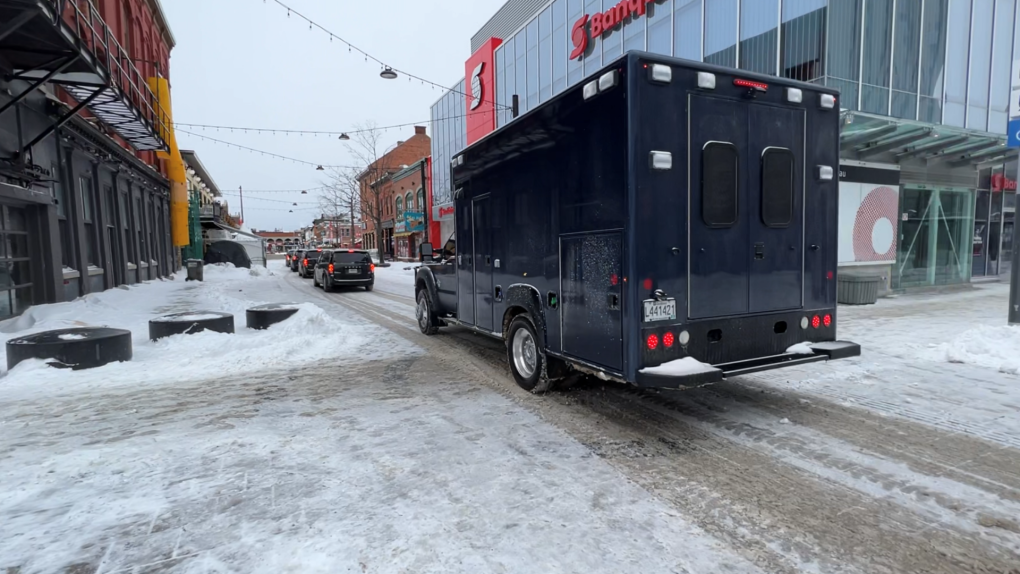 The clean-up begins after the "Freedom Convoy" is moved out of Ottawa and council meets for the first time since an emotional meeting.

CLEANING UP AFTER THE 'FREEDOM CONVOY' DEMONSTRATION

Businesses and restaurants in downtown Ottawa will begin to reopen this week, as the clean-up continues from the three-week "Freedom Convoy" demonstration.

Police said businesses that have been closed since the demonstration began Jan. 28, "should feel safe to reopen," adding there will continue to be a "strong police presence" in the red zone in the days ahead.

"Businesses and residents, we thank you for your patience throughout this operation. Supporting local businesses is considered lawful if you are entering the secured area," police said on Twitter.

The Metropolitain Brasserie on Sussex Drive announced it would reopen at 5 p.m. Monday.

Ottawa police have not said when the secured area around downtown Ottawa will be lifted.

"They will be in place only as long as necessary to remove the unlawful protests," Interim police chief Steve Bell said Thursday.

"We'll continue to have increased enforcement in and around the residential areas," Watson said, noting police have promised not to leave until the city is "safely returned to the people of Ottawa."

"We want to make sure that it's like putting out a fire. You don't want to have that one last ember light up again. You need to have the force that we had through the different police services to ensure that this thing ends peacefully, as quickly as possible."

O-Train service will resume on Monday in the downtown core, with trains serving Lees, uOttawa, Rideau, Parliament and Lyon Stations.

INVESTIGATION INTO THE FREEDOM CONVOY

While the "Freedom Convoy" demonstration is gone from downtown Ottawa, police say the investigation will continue into the days and weeks ahead.

As of 4 p.m. Sunday, 191 people had been arrested since the operation began to clear the Parliamentary Precinct. Ottawa police say of those arrested, 107 people were charged.

Interim police chief Steve Bell told reporters on Saturday the investigation into the "Freedom Convoy" demonstration will be "complicated and time consuming."

"You have my commitment that, that investigation will continue and we will hold people accountable for taking our streets over."

Bail hearings are scheduled on Tuesday for Tamara Lich and Pat King, two of the organizers of the demonstration facing charges.

Council will meet Wednesday for the first time since an emotional council meeting that saw the chair of the Ottawa Police Services Board removed from her position and a councillor call on Mayor Jim Watson to resign.

Councillors may receive an update on the city of Ottawa and Ottawa police response to the "Freedom Convoy" demonstration that blocked city streets for more than three weeks.

Last Wednesday, council voted to remove Diane Deans as chair of the police board. The move came one day after Peter Sloly resigned as chief of police.

Coun. Carol Anne Meehan and Rawlson King resigned from the police services board during the meeting.

During the debate, councillors took aim at the mayor for his leadership during the demonstration that occupied downtown Ottawa for 24 days.

"I think the mayor of the city of Ottawa should resign tonight, because this city is in chaos and it doesn't need to be," Meehan said during Wednesday's meeting.

"Mayor Watson, I have lost all confidence in you as mayor of the city of Ottawa," said Coun. Catherine McKenney.

ALL EYES ON COVID NUMBERS

All eyes will be on the key COVID-19 indicators in Ottawa now that more COVID-19 restrictions have been eased.

"Monitoring indicators tell us that the level of Omicron is continuing to decline," medical officer of health Dr. Vera Etches said in a special statement last week.

"We have seen signs of a significant decrease in COVID-19 activity, including a decline in wastewater signals, test positivity rates and new hospitalization and outbreaks in hospitals, long-term care and retirement homes."

Etches urges people to be cautious, especially those at higher risk of severe illness.

Last Thursday, Ontario eased COVID-19 restrictions for a number of non-essential settings where proof of vaccination is required, including restaurants and gyms.

The audit committee will receive an update from Auditor General Nathalie Gougeon on Tuesday.

WHAT'S HAPPENING IN OTTAWA THIS WEEK

John Horgan is expected to announce Tuesday afternoon that he will step down as premier of British Columbia, sources tell CTV News.