An Ottawa woman is accusing a well-known lawyer of sexual misconduct, saying he offered her legal services in exchange for sexual favours.

James Bowie, who became known on Twitter this year for chronicling the court appearances of various 'Freedom Convoy' organizers, is the subject of an official complaint to the Law Society of Ontario.

The complaint alleges Bowie sent the woman "unsolicited intimate images, attempted to convince her to do illegal drugs with him, propositioned her, and offered legal services for sexual favours."

"These predatory acts violate multiple rules of professional conduct and were deeply harmful and offensive," the complaint said. "Mr. Bowie was seeking to prey on a vulnerable client."

The woman, whose identity CTV News has agreed to conceal, said she feels taken advantage of and preyed upon and the experience left her feeling suicidal.

"I confided in him. He knew I was a victim of sexual assault," she said in an interview. "I think he took the little pieces of myself I confided in him and ran with it, used it to his advantage.

"I feel like stuck doesn’t really do it justice because it, for lack of better words, ruined my life. I couldn’t go to work, I was afraid to leave the house, I couldn’t sleep, I couldn’t eat. I was so overwhelmingly … I became suicidal."

The woman's new lawyer, Michael Spratt, called the messages between Bowie and the woman "shocking and disturbing."

“She showed me the communications that she had with him and it’s probably one of the most shocking and disturbing communications I’ve seen between a lawyer and a client," he said.

CTV News called, emailed and texted Bowie to ask about the allegations in the complaint. He has not responded. CTV News also called his lawyer and has not heard back.

Bowie tweeted Tuesday evening, about one hour after this story was published, to say, "It's fake. Just you wait. You'll see. It's fake."

The woman said she hired Bowie when she was facing an assault charge. She was looking for legal help and a friend put in her touch with him.

But she first began questioning his intentions when he offered her a "deal." 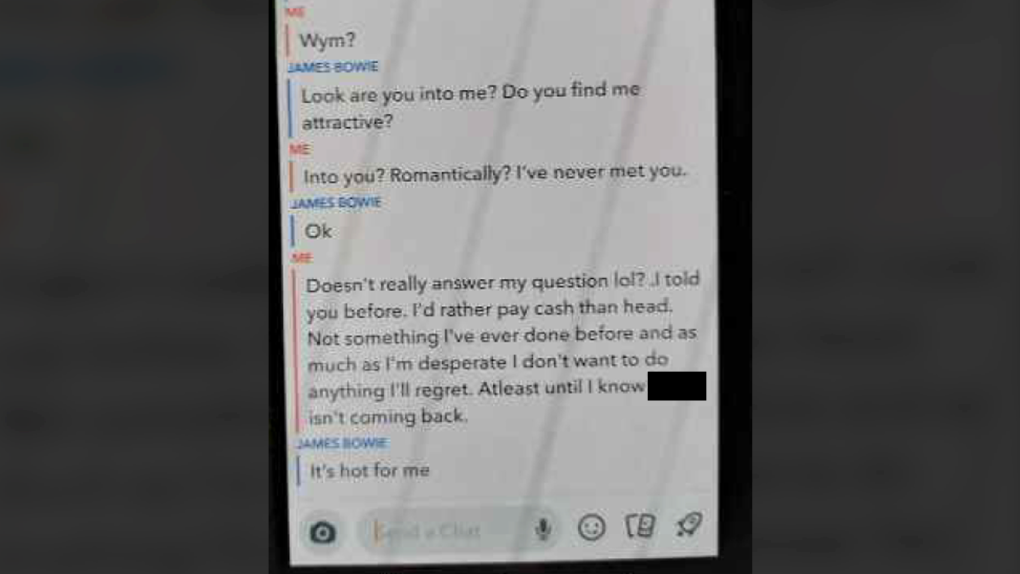 Despite her refusal, she alleges Bowie persisted, offering her a reduced rate, and suggesting she perform oral sex instead of paying cash.

“I made sure that the dates I would pay him were my pay day, so that would never be the case," she said.

Messages and documents submitted as part of the official claim and seen by CTV News show that Bowie shared an unsolicited explicit picture with the woman and made inappropriate comments in conversations over Snapchat."I hope it's not because of my dick pic lol," Bowie said when the woman said her boyfriend was upset with her.

The message showed that Bowie suggested the woman perform sexual favours instead of paying legal fees, knowing she was short on cash.

“Take a break from your instalments, but I get dibs on your rebound. Deal?” Bowie said when she told him her relationship with her boyfriend was on the rocks.

Another time, Bowie told the woman: "Don't send me money."

The woman responded that she didn’t know what Bowie was talking about.

The woman later replied, "I don't want to suck your d--- and it ruin everything I've been working for."

Another time, Bowie suggested he should be paying the woman in cash. 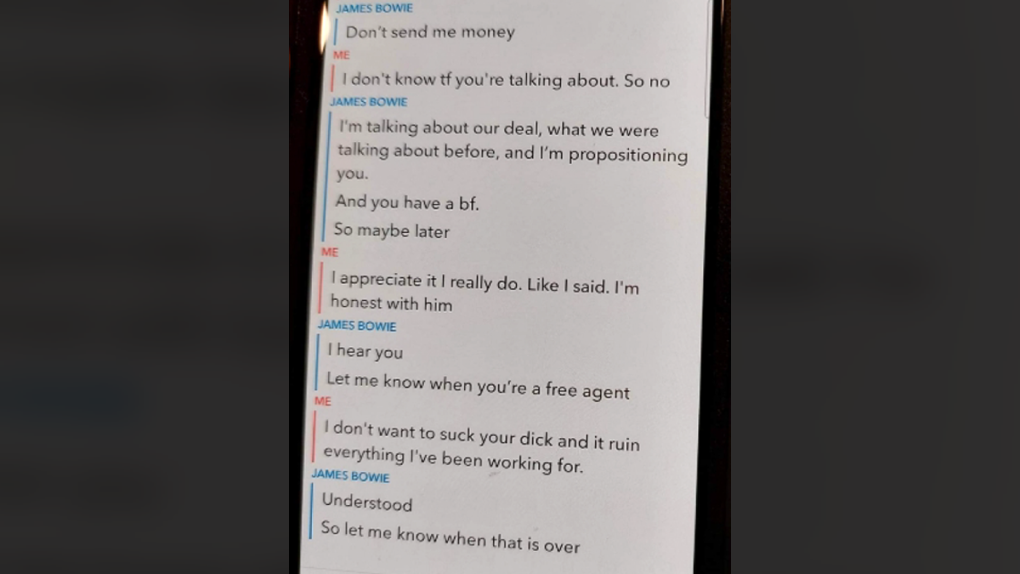 In a conversation about how much stress the criminal charge was causing the woman, she confided in Bowie that she had taken time off work.

"This depression is crippling me. I've got so much on my plate I feel like I'm drowning lately," she said.

Bowie responds: "That's why you need to travel and have fun and blow off steam."

The woman responded that she can't afford to.

"This is where I come in," Bowie said. "How often do you crush lines?"

"Literally once in a blue moon," the woman responded.

"Maybe we should," Bowie said.

Another time, Bowie asked what the woman did that day, and she responded that she "laid in bed and cried until about 630."

Bowie asked if she was by herself, and when she said yes, he asked: "Want to get dinner and just snuggle?"

The woman responded she wanted to be alone. 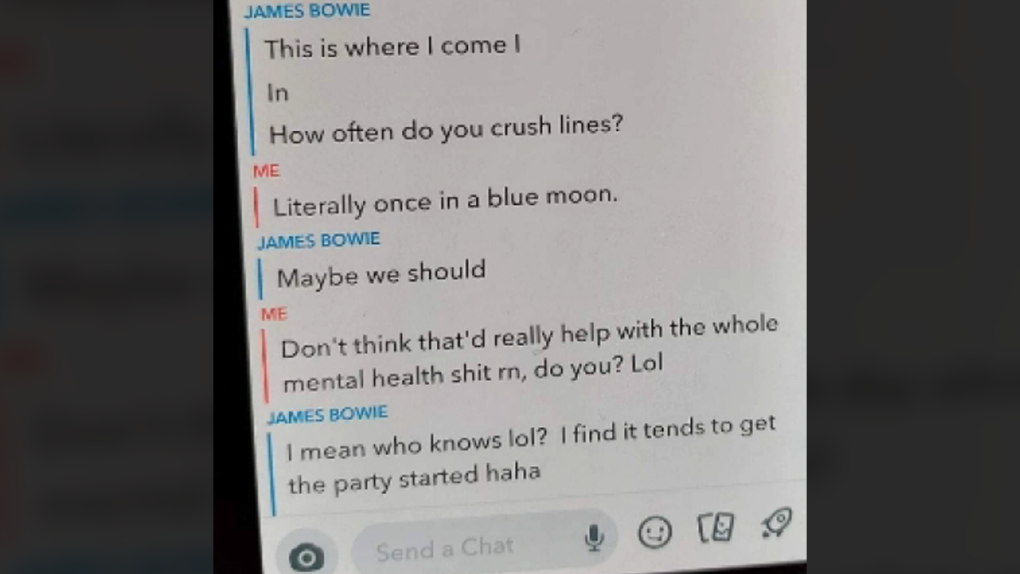 With the help of a new lawyer, the woman had her initial case dropped and launched the official complaint with the law society.

“These are some of the most serious allegations I’ve seen against a lawyer," Spratt said. "They’re disturbing and there’s evidence to back them up. He not only tried to extort sexual services from her, offer her drugs, proposition her, but he preyed on someone who was vulnerable and who he was supposed to help."

The complaint to the law society also alleges that Bowie contacted the woman after being asked not to contact her.

The woman said the experience with Bowie made her feel "worthless."

“I was afraid to tell anybody," the woman said. "I lost my partner because of it. I didn’t tell anybody what was going on."

The woman said she hopes that sharing her story will stop this from happening to anyone else.

“Given the emotions I felt through this, how worthless I felt, that’s something I can’t take away from myself, but potentially I can take that away from somebody else, I just don’t want him to hurt anybody else."

Wine lovers have growing options on the shelf to enjoy their favourite beverage as producers in B.C. offer smaller container sizes.

On Tuesday in Ottawa, Canada's 13 premiers and Prime Minister Justin Trudeau will sit around the same table in person for the first time since COVID-19 hoping to find a path toward a new long-term health-care funding deal.