Here's what you need to know about the Hwy. 417 closure until Tuesday at 6 a.m.

Here's what you need to know about the Hwy. 417 closure until Tuesday at 6 a.m.

Motorists will face significant delays travelling in the city of Ottawa to start the new week, as a five-kilometre section of the Queensway remains closed for construction.

Highway 417 is closed between Metcalfe Street and Carling/Kirkwood avenues for the replacement of the Rochester Street bridge. The highway is scheduled to reopen by 6 a.m. Tuesday.

Delays were reported on many east-west routes through Ottawa over the weekend, including Carling Avenue, Baseline Road and Hunt Club Road.

Detours are in place for motorists travelling eastbound to exit Hwy. 417 at Carling Avenue/Kirkwood Avenue, and westbound traffic to exit the Queensway at Metcalfe Street. Rochester Street will remain closed under the highway until Oct. 11.

Ottawa Mayor Jim Watson is urging people to plan ahead before hitting the road.

"We’re asking people to take transit or take an alternative route, or if you have flex hours that you can come in a little later, a little earlier because it’s going to be a real challenge," Watson said.

The Rochester Street Bridge replacement was originally scheduled for Aug. 12-14, but work was delayed due to a strike in the construction sector.

Frank Vanderlaan, an area manager of highway engineering, planning and design for the Ministry of Transportation, said all signs are pointing to the highway opening on time at 6 a.m. Tuesday.

"All that remains right now, really, is just the paving to be completed, the line markings to be completed on the asphalt, and the temporary concrete barrier to be placed in the median and on the side and the shoulder, so it’s looking very good," Vanderlaan said.

This is the second of five bridge replacements in Ottawa over the next three years. The Booth Street Bridge was replaced in August, and the Bronson Avenue and Percy Street overpass structures will be replaced next summer.

The Preston Street Overpass is scheduled to be replaced in 2024.

HERE'S A LOOK AT THE DETOURS ON HWY. 417 THIS WEEKEND 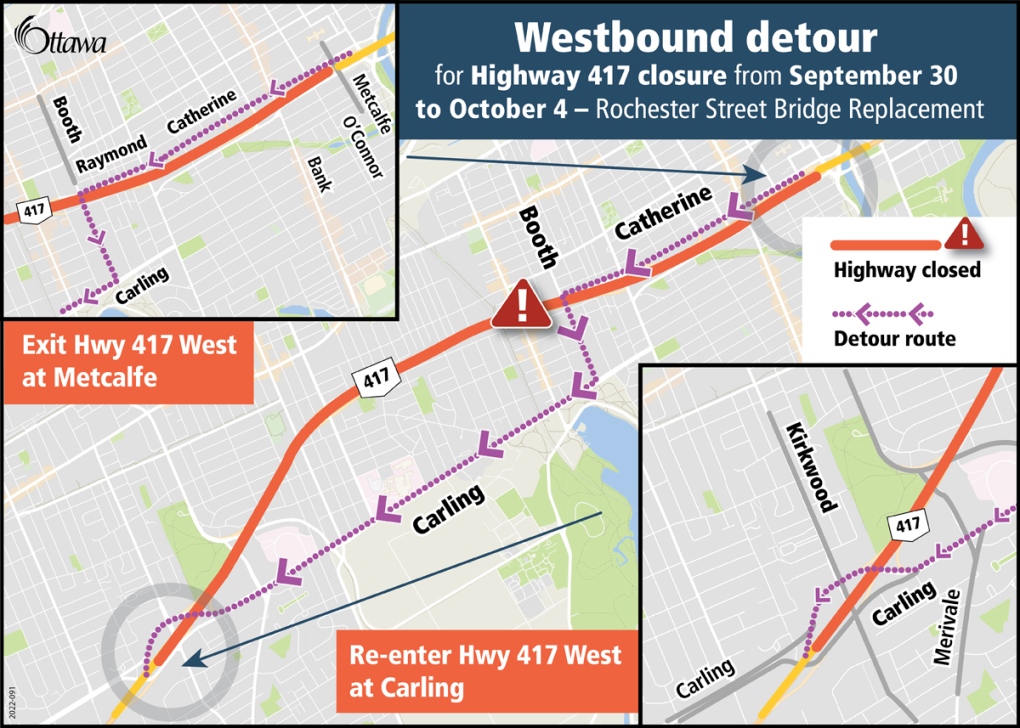 A look at the westbound detour for the Highway 417 closure this weekend. (City of Ottawa/Twitter) 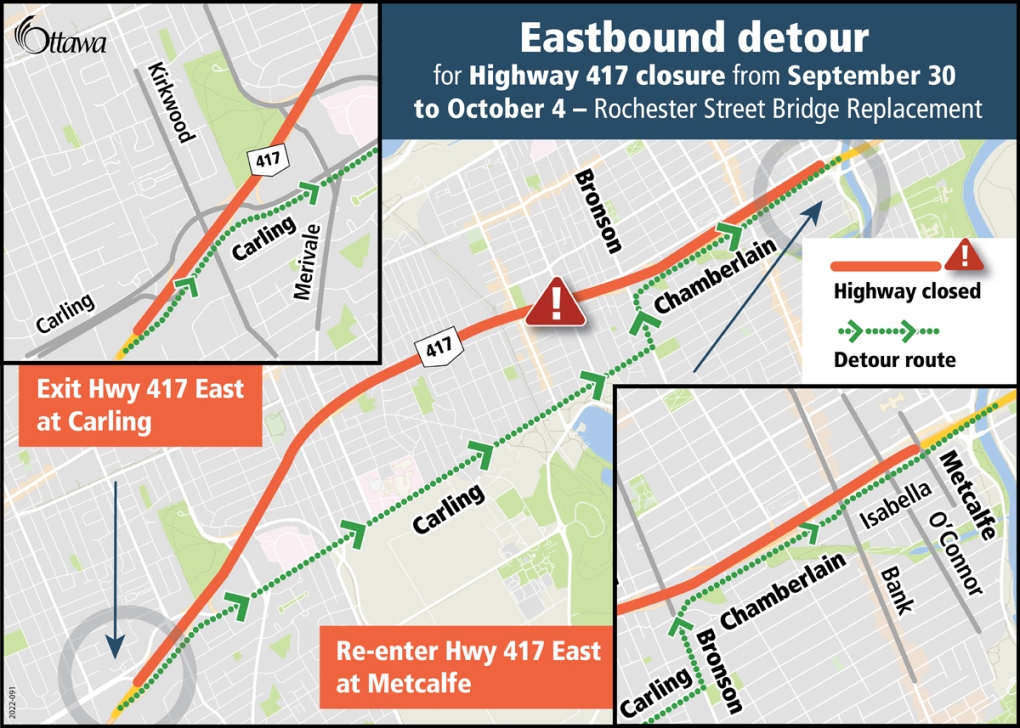 A look at the detour for commuters travelling eastbound on Hwy. 417 this weekend. (City of Ottawa/Twitter)

Several city streets will also be closed this weekend as part of the construction.

Just a reminder, a section of the Sir John A. Macdonald Parkway will be closed to vehicle traffic from 8 a.m. to 4 p.m. Saturday and Sunday for the NCC bike weekends.