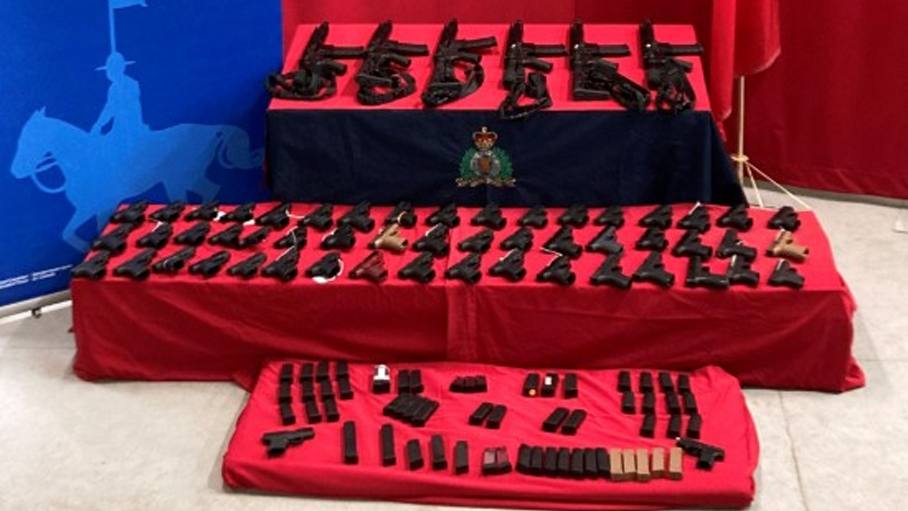 The RCMP showed off the 59 illegal firearms seized at the Canada-U.S. border near Cornwall, Ont.by officers on Nov. 26. (Photo courtesy: Twitter/RCMPONT)

Two Quebec men are facing charges after the RCMP seized 59 illegal firearms during an investigation into a boat landing at the Canadian border near Cornwall, Ont.

The RCMP says on Nov. 28, members of the Integrated RCMP Cornwall Border Integrity Team launched a firearms smuggling investigation after a boat crossed the St. Lawrence and made landfall.

"Three large bags were unloaded from the boat into a vehicle which departed the area," said the RCMP in a statement on Thursday.

"Subsequently, RCMP conducted a roadside stop of the vehicle and found a large number of restricted and prohibited firearms and high capacity-magazines."

The investigation uncovered a total of 53 restricted and prohibited pistols, six prohibited rifles, and 110 magazines.

"As is the case with the vast majority of unlawful guns, it is believed these firearms were destined for criminal networks and illicit gun trafficking groups," said the RCMP.

Inti Falero-Delgado, 25, of Laval, Que., and Vladimir Souffrant, 49, of Montreal face several charges, including unauthorized possession of a firearm and possession of weapons for the purpose of trafficking.