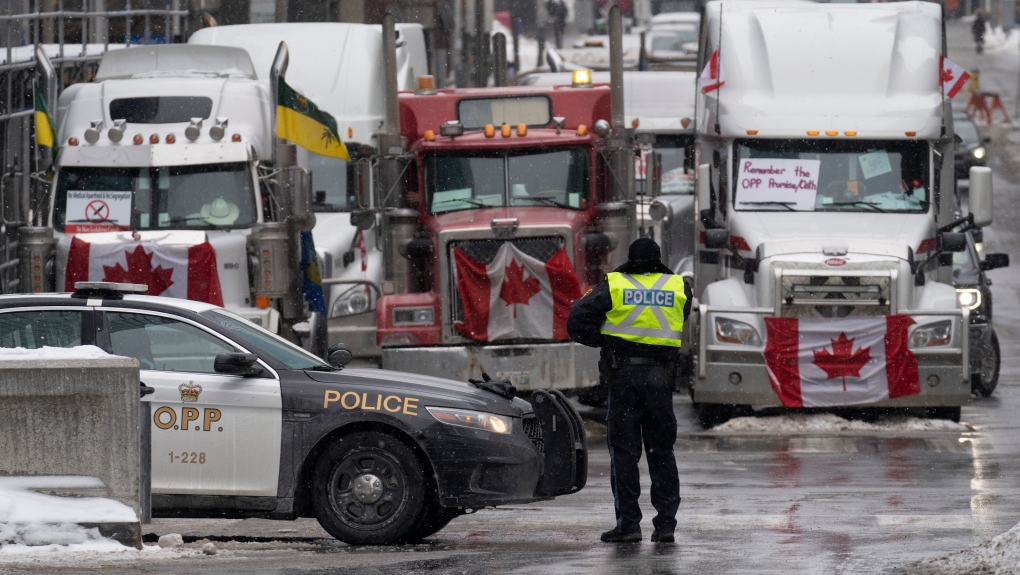 The officers were part of the police operation that helped clear the downtown core of the occupation, which lasted for weeks and led the federal government to invoke the Emergencies Act.

“On my assessment of the evidence, there are no reasonable grounds to believe that either officer committed a criminal offence in connection with the use of their weapons,” Special Investigations Unit director Joseph Martino said in his ruling.

The incident happened at Bank and Sparks Street on the night of Feb. 19, as police were attempting to direct the crowd south so a fence could be erected.

The shots were fired at a 36-year-old man and a 41-year-old man. The SIU interviewed both men in the following days. No serious injuries were reported.

The SIU investigation lays out what led the officers to fire their non-lethal weapons.

Investigators said the frontlines had police and protesters face-to-face. The numbers of protesters were in the thousands by some estimates.

“The atmosphere was tense as the parties physically engaged and pushed back against each other. A number of arrests were made,” the report said.

The 36 and 41-year-old men climbed on top of a concrete barrier on the east side of Bank Street, near the McDonald’s. Beside them was another man -- his identity remains unknown -- who shone a flashlight in a police officers’ eyes.

One officer fired several rounds of an L140-4, a less-lethal firearm, at the man. He was struck in the face, knocked off the barrier and disappeared into the crowd.

Another round struck the two other men, who climbed down the barrier and left the area.

The second officer was armed with an ARWEN, an anti-riot weapon.

“In order to deter protesters moving towards officers, some of whom had fallen in the push forward, the officer fired his ARWEN striking one such protester in the leg. He fired his weapon a second time at another protester who had been fighting with police officers and was moving again towards the front lines,” the SIU investigation found.

Five SIU investigators were assigned to the case. They used Ottawa police drone footage, city street surveillance video, and video footage from the nearby Parliamentary Services and Bank of Canada buildings.

Investigators interviewed three witness officials. The two officers under investigation declined to be interviewed, which is within their legal rights. However, one of the officers provided a written statement.

Martino said he is satisfied that the officers’ deployment of the less lethal firearms was legally justified in both cases.

The first officer’s shots were aimed at the man with the flashlight who was trying to interfere with the officers’ vision.

“Given the man’s distance from the front lines of the police, it would have been impractical and perhaps even dangerous to wade into the crowd to deal with the man directly.”

The second officer’s shots were also “commensurate with the exigencies of the moment," according to Martino's ruling.

“They were directed at the legs of two protesters who seemed on the verge of physically engaging with the officers, including officers who were on the ground at the time. In both instances, the force succeeded in deterring the protesters, presumably without the infliction of serious injury.”