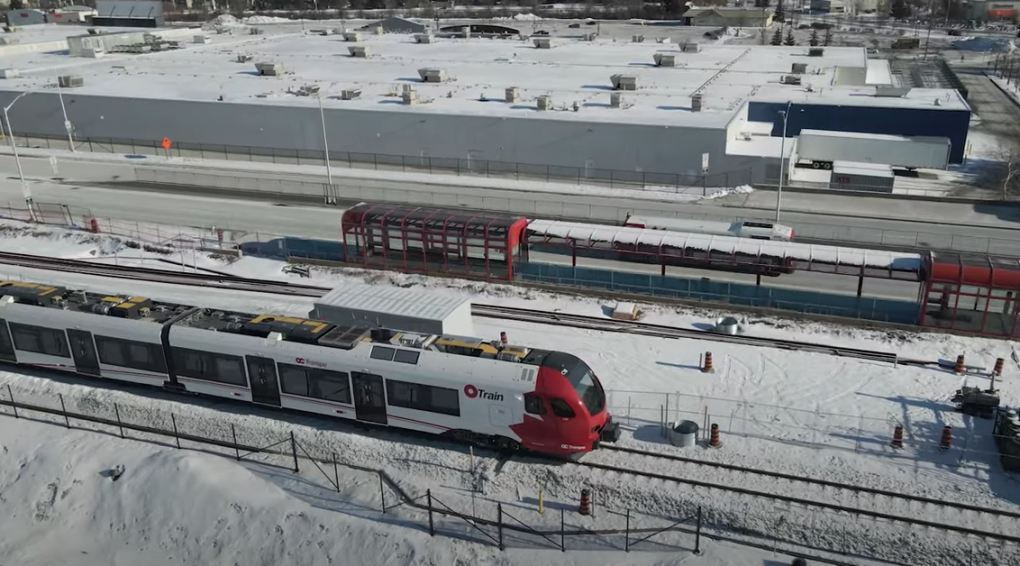 Ottawa's new LRT Stadler FLIRT trains were out for a test drive on the Trillium Line this weekend.

Mayor Jim Watson shared a video of the new trains on the north-south LRT extension between the Walkley Maintenance and Storage Facility and Leitrim Station.

Ottawa purchased seven, four-car multiple units from manufacturer Stadler for the north-south Light Rail Transit Line from Bayview Station to Riverside South, with a link to the Ottawa International Airport.

The Stadler FLIRT trains are 80 metres long and can carry 420 passengers.

The first shipment of the diesel trains arrived from Switzerland in October. The train was shipped from Antwerp, Belgium to Newark, New Jersey, then driven by truck through New York State to Ontario.

Council was told in December the Trillium Line extension is running nine months behind schedule, as the COVID-19 pandemic causes delays with construction.

The north-south Trillium Line was originally scheduled to be completed in August 2022, and handed over to the city for final testing.

The new plan would see full line testing begin in December with substantial competition and hand over to the city expected in the middle of May 2023. The trial-running period for the Trillium Line is 21 days.

Did you catch a glimpse today of the new #Stage2LRT Stadler FLIRT train on the #OTrainSouthExtension test track between the new Walkley MSF and Leitrim Station? Keep an eye out for more testing in the Hunt Club area this week! Check it out here: https://t.co/o7xowqNQYy

U.S. President Joe Biden and first lady Jill Biden are hoping to console a city stricken by grief and anger when they meet with families affected by the mass shooting at a Texas elementary school that killed 19 students and two teachers.