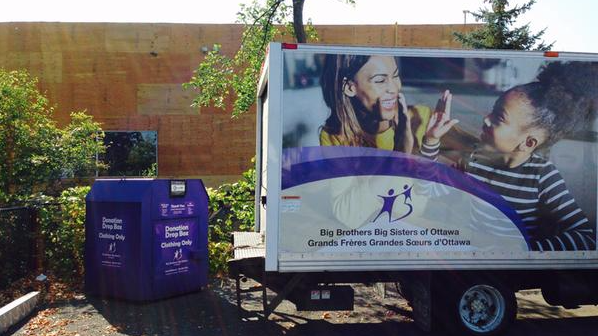 A Big Brothers and Big Sisters Ottawa clothing donation bin and truck are seen in this undated photo.

Ottawa Police have laid charges against a 35-year-old man after finding some clothing donation bins that had been reported stolen.

Big Brothers and Big Sisters Ottawa had reported six metal donation bins had disappeared last December. Each weighed about 1,000 pounds. Their counterpart in Gatineau also reported having bins stolen at around the same time.

Police say the bins were found repainted and rebranded with a different, unaffiliated company’s logo on them.

Ottawa Police say 35-year-old Brennan D. Cartier, of Ottawa, is facing charges of mischief and possession of property obtained by crime over $5000.

Five bins have been recovered, police say, belonging to several charities. Investigators continue to look for the others.

Ottawa Police are warning the public to research the company whose name appears on a clothing donation bin before putting anything in one.