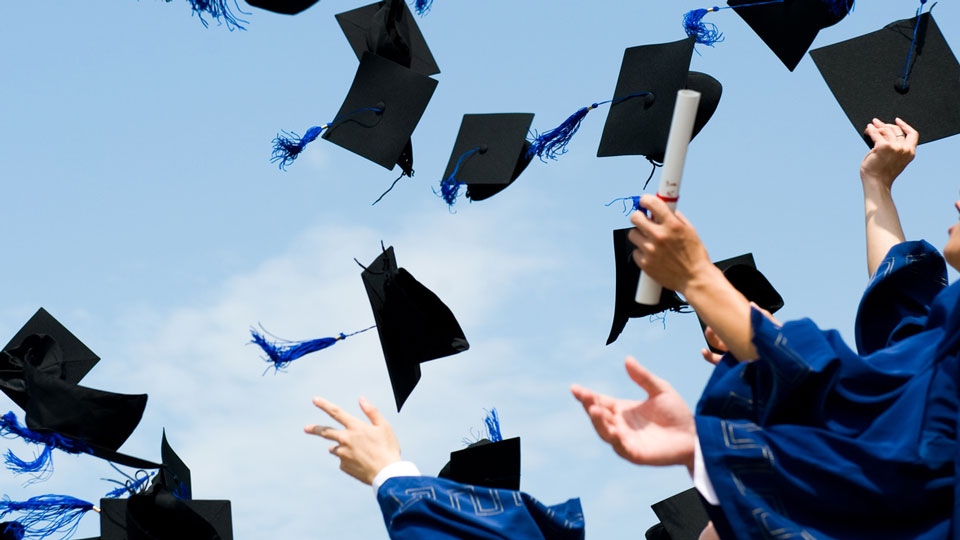 Premier Kathleen Wynne announced Tuesday that last year 78.3 per cent of students got their high school diploma after four years, and the graduation rate increased to 85.5 per cent when adding students who took an extra year.

"It's perfectly permissible for students to take five years, and many are taking five years, but the majority of students who are graduating are doing it in four years."

Wynne said students need the option of taking a fifth year to finish high school, even though Ontario eliminated Grade 13 in 2003.

"There have been various suggestions that we shouldn't allow that fifth year, but I think that would be a huge mistake," Wynne told students at York Mills Collegiate Institute.

"I think it's absolutely the kind of support that leads to a well-educated workforce."

There are huge variances when the graduation rates are broken down by school boards -- with four year rates ranging from 46.1 per cent to 91.5 per cent.

Sandals could not explain why publicly funded Roman Catholic school boards have consistently higher numbers than public schools in the same regions.

"There is often slightly different demographics within the student populations in different boards, even in the same area, so that may be a factor," she said.

"There are some boards where we want to see the graduation rates going up, but it's also a matter of narrowing achievement gaps with students who are lagging behind."

The government said increasing the graduation rate means about 190,000 more students got a high school diploma than would have if that rate had remained at the 2004 level.

Ontario is facing a shortage of francophone teachers, in part because the previous program for training teachers was only half as long as Quebec's, said Sandals.

"Students from Quebec would come to Ontario, do the one-year program and then quickly scamper back to Quebec once they were qualified," she said.

"Because we now have a program that is more or less the same length as the Quebec program, we're not having that effect any more."

The government wants to recruit more francophone students to become teachers, and may have to make more room for them at universities, added Sandals.

"I suspect that in some cases we may want to actually rebalance the mix between francophone spaces and anglophone spaces at some faculties (of education)."