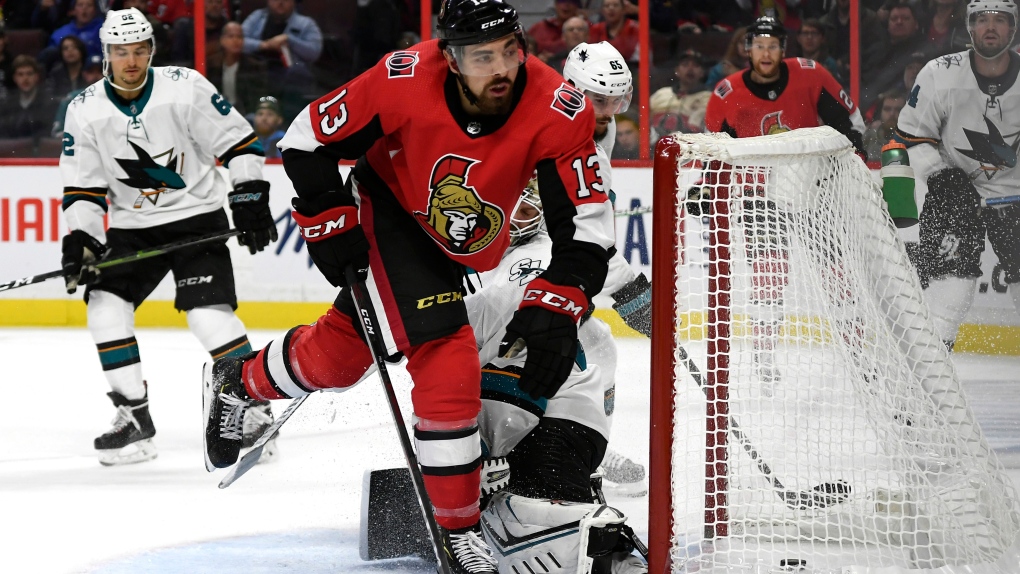 Paul had the first multi-point game of his NHL career with two goals and an assist as the Ottawa Senators beat the San Jose Sharks 5-2 on Sunday.

Paul, drafted 101st overall in 2013 by the Dallas Stars, spent an early part of the season with American Hockey League's Belleville Senators before being recalled Oct. 14. He has four points in six games since joining Ottawa.

Senators coach D.J. Smith added: "He works, he works in practice, he's been humbled and been through waivers a bunch of times so it's hard not to pull for a guy like that. He's doing everything he can to stay in the league so certainly he's been good for us."

Brady Tkachuk had a three-point night as well with a goal and two helpers while Connor Brown and Anthony Duclair also scored for the Senators (3-7-1). Craig Anderson stopped 34 shots.

Evander Kane and Kevin Labanc scored for the Sharks (4-7-1), who have struggled on their five-game road trip.

San Jose has gone 1-2-1 and will wrap up the trip Tuesday in Boston.

Aaron Dell allowed four goals on 22 shots and was replaced by Martin Jones for the third period. Jones allowed one goal on eight shots.

"We're 12 games in and there's a handful of key guys for us that haven't played well yet," said Sharks coach Pete DeBoer. "That's on me to get them back to the level they need to be at."

The game marked Erik Karlsson's second in Ottawa since being traded to the Sharks in Sept. 2018. He had a less than stellar outing finishing minus-4 in front of the second smallest crowd of the season at 9,740.

"As a team and as individuals I don't think that anyone is really pleased with the way we played (Sunday)," said Karlsson. "It's not a representation of this organization and this team and it's definitely not one of the better ones that we've had and not what we needed right now.

"It's moments like this that we have to stay true to ourselves and believe in ourselves and know who we are as individuals and as a team and find a way to pull through."

Duclair gave the Senators a 5-2 lead late in the third as he used his speed to break in and beat Jones off his backhand.

An exciting, fast-paced second saw the Senators take a 4-2 lead after 40 minutes.

Paul scored his second of the game as he rushed to the net and drove home a pass from Brown.

The Sharks managed to make it a one-goal game after Brent Burns found Labanc through the middle and he beat Anderson five-hole, but the Senators regained a two-goal lead in the final minute of the second as Tkachuk jammed home a rebound from in close.

The Senators took a 2-1 first-period lead thanks to some solid work by Paul.

Ottawa opened the scoring at the six-minute mark when Brown picked up his first goal with the Senators, with Paul getting an assist on the play.

The Sharks tied the game on a two-man advantage as Kane re-directed a great feed from Burns, but the Senators regained the lead when Paul fired a wrist shot past Dell stick side.

Bobby Ryan was a healthy scratch as Smith called out the 32-year-old's lack of production of late. Ryan has one goal and three assists through 10 games.

The Senators have the next five days off before they head to Boston to take on the Bruins Saturday night.

This report by The Canadian Press was first published Oct. 27, 2019.