Freedom Fighters Canada organized the "We Move as One" demonstration in cities across the country, including a "slow roll" convoy into Ottawa and a demonstration outside the Embassy of the Netherlands blocks from Parliament Hill.

Ottawa police say one person was arrested on Obstruct and Public Mischief charges after an,  "Uncooperative and large group of vehicles attempted to enter the downtown core, caused disruption to the regular flow of traffic in various parts of the city and refused to leave."

Police say officers were deployed in the downtown area to monitor vehicle movements, temporarily close off-ramps from Hwy. 417 into the core and enforce the "vehicle exclusion zone" that prohibits vehicles from parking or stopping near Parliament Hill.

Ottawa Bylaw says 103 parking tickets were issued inside the temporary no-stopping zone, and 12 vehicles were towed.

Dozens of vehicles participated in the "slow roll" convoy along Hwy. 417 to the downtown core, where hundreds of people demonstrated outside the Embassy of the Kingdom of the Netherlands on Albert Street. Farmers in the Netherlands have been holding a series of demonstrations to protest new environmental targets by the Dutch government.

"The government is trying to put all these family farms out of business," Jerry said. "I read about one farmer who has to cull 95 per cent of his dairy heard just cuz he lives next door to a forest."

"When we had our truck rally, they supported us," said a woman taking part in the demonstration.

Here is the “slow roll” protest travelling EB on the 417 at Moodie. Lots of signs. Lots of flags. Lots of honking. @ctvottawa #ottnews pic.twitter.com/kRZ7WjY0At

Ottawa police and Bylaw Services set up a temporary no-stopping/no-parking zone in an area from Bronson Avenue in the west to the Rideau Canal in the east, and Wellington Street in the north to Laurier Avenue in the south. The no-stopping zone and the no protest zone includes the area where the Dutch embassy is located.

"To effectively allocate resources across the city, officers were deployed into the downtown core and surrounding areas to minimize disruption to residents, businesses and visitors; monitor convoy movements," police said on Twitter Saturday night. "Temporarily close Hwy 417 off-ramps to deter vehicle-based demonstrators from entering the downtown core; engage with demonstrators; enforce the vehicle exclusion zone; remind demonstrators of Highway Traffic Act information; communicate with the public and demonstrators and, manage a demonstration and snake march through the downtown core with rolling road closures to ensure public safety."

Signs at the rally included "Freedom", "Hold the Line" and "Stand With Farmers or Eat Crickets."

"We want freedom of conscience, ability to live, ability to farm, to buy as many animals as you want, to farm as much as you want," Stephanie said. "The freedom to sell what you produce and not have it bought up by government agencies and destroyed."

Police reported seeing farm equipment on the streets within the city, reminding farmers that equipment is not allowed in the area.

"We want to remind everyone that in Ontario, you cannot drive farm equipment on a Highway like the 417 & 416 unless there is no other access to the farmland you are working on, and the land must adjoin to a 400-series Highway," police said on Twitter.

Convoys were scheduled to travel from Brockville, Kemptville, Renfrew and Arnprior to Ottawa's west end ahead of the downtown rally. Freedom Fighters Canada outlined etiquette for the protest, including "no blockading on any roads, exits, bridges or highways" during the event and "ensure flags are properly secured."

Farmers in the Netherlands have been holding a series of demonstrations to protest new environmental targets by the Dutch government.

Authorities have unveiled plans to cut emissions of pollutants like nitrogen oxide and ammonia by 50 per cent by 2030, to help protect more than 150 nature reserves in the country.

In recent weeks, farmers and supporters have protested outside government offices and on highways, and blocked food distribution centres across the country.

Ottawa police issued a warning to motorists about possible protests in the downtown core.

"There is zero tolerance for vehicle-based demonstrations or events within the city's designated zone in the downtown core," police said on Twitter.

"Groups choosing not to respect these designated areas will be met with an immediate police response involving enforcement and comprehensive towing options."

Police say vehicle-based demonstrations or events are prohibited within an area stretching from Bronson Avenue in the west to Waller Street in the east, and Wellington Street/Rideau Street to the north to Laurier Avenue in the south, along with Booth Street, Sussex Drive and Mackenzie Avenue. 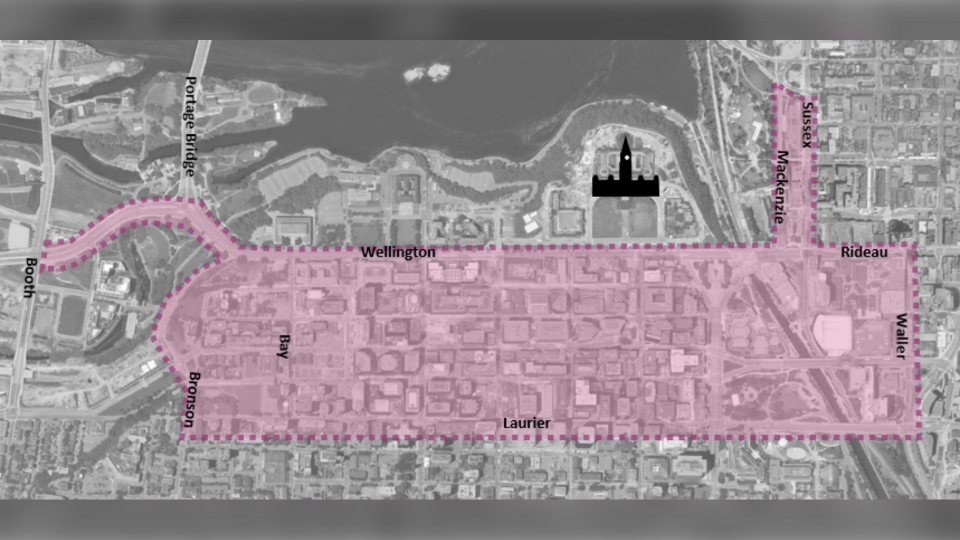 "The downtown core remains open and accessible. The only exception are vehicles wishing to do a vehicle-based demonstration," OPS says.

--With files from The Associated Press