CHEO is giving the public an unprecedented look at how it is managing high patient volumes and staffing challenges this fall to keep its pediatric intensive care unit open to "life and limb" patients.

"I'm willing to wheel and deal."

The children's hospital is at 124 per cent occupancy in its inpatient medical units, where the bulk of emergency admissions are transferred, and "all budgeted beds are full", according to the hospital.

CHEO says on many nights over the last few weeks, more than a dozen patients were admitted nightly in the emergency department with no bed available in units.

"Our intensive care unit has been in ‘life or limb’ status for much of the past two weeks," CHEO said in a statement, adding all critical care units have been at or over capacity every day since Sept. 11.

"And our emergency department, which yesterday alone saw 61 more patients than it was built for (211 patients vs. 150), is experiencing hours-long waits for care."

As CHEO announced a number of measures to address the patient and staffing pressures, it released a video showing how Clinical Operations Managers are juggling patient volumes in the emergency department, the need for available beds for patients and managing staffing levels.

"Talk to me about your minimal staffing needs in order to stay open to life or limb tonight, what do you need?" Whyte asks Pediatric Intensive Care Facilitator George Gubb on Wednesday afternoon.

"Tonight is, basically, to stay open; I recommend an XM and a GN. To preserve just basic function, a GN only," Gubb responded.

Ninety minutes later, the video shows dozens of patients and their families waiting in the hallways of the emergency department for triage and to see a physician.

"At CHEO it is 4:30. The pace of the hospital has changed; the emergency department is starting to see many more children with many more crucial illnesses. We are running out of rooms in our emergency department, and we still have day admitted patients that haven't been able to be transferred up to the units," Whyte said.

"Our goal for the rest of the evening will be to move those admitted patients from the emergency department up to units, where we can continue their care," Whyte said.

Whyte adds the goal for staffing is doing "everything we can to keep our PICU open to life and limbs."  The term "life and limb" means the ability to take a child or youth at risk of losing a limb or their life if they do not receive care in the next four hours.

"This means bringing in staff, moving staff, moving nurses from surgical units to our intensive care units and moving patients with safe dispositions at the same time," Whyte said.

The video then shows Whyte on the phone with staff in CHEO, saying they are "desperate for staff" to care for patients. 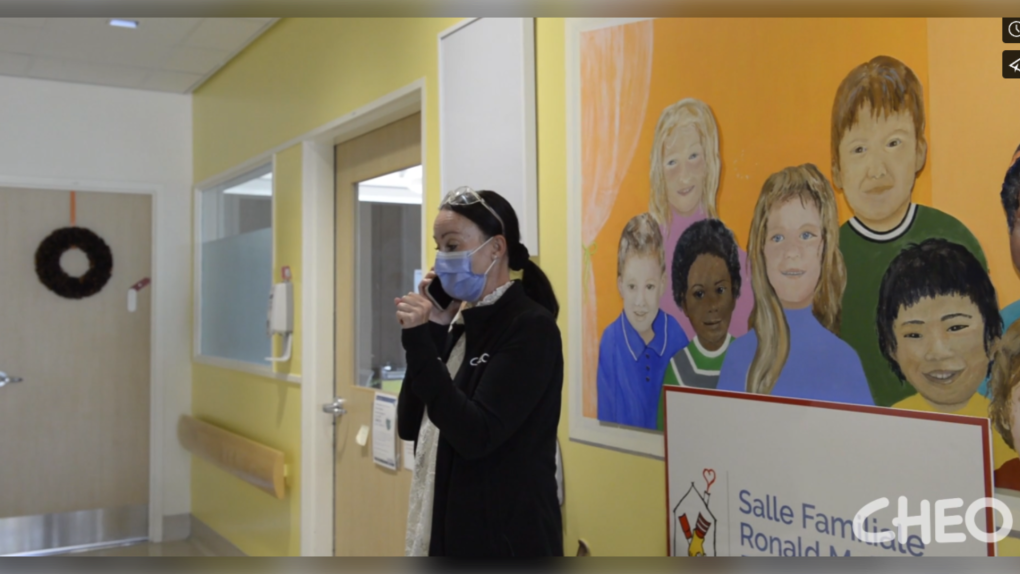 CHEO says it was able to keep its pediatric intensive care unit open for "life and limb" for the day on Wednesday, but it left a backlog of admissions in the emergency department waiting for a bed in the unit.

"Plans for yesterday, essentially, was making sure that our intensive care was in a similar situation ….that we were able to keep it open to life and limb within our region, and we are able to do that with mobilizing staffing resources from other areas of the hospital."

CHEO says the April to September period was the busiest six-month period ever for our emergency department, while mental health units have been frequently in "major surge" dealing with youth mental health crisis exacerbated by the pandemic.

CHEO announced a series of measures to respond to the "unprecedented pressures" through the summer and fall to care for patients, including returning staff to patient-facing positions and adding new positions in the emergency department.

CHEO says thanks to its team, they are working to "free-up medical professionals with critical care training to patient facing needs", having staff take on additional shifts and expanding staffing at the Kids Come First and East Ottawa Kids clinics.

In the coming weeks, the hospital plans to add more than a dozen positions in the Emergency Department, including pre-triage rapid assessments and physician assistants. CHEO is also improving the wait times modelling on its website so people can "better know what to expect" before visiting CHEO and introducing new online tools for families to navigate their care.

"We know that people trust CHEO with their children’s care – often at the worst, most difficult moments of their lives," CHEO president and CEO Alex Munter said. "That is a trust we don’t take lightly and know we have to earn every single hour of every day. We are taking action on several fronts to ensure CHEO patients and families receive the timely, world-class care they expect and deserve."

CHEO says 250 "helpers" across the hospital took on additional shifts through the summer and more than 100 acute care positions were created in the summer.

Long waits are hard for everyone. That's why ahead of another long weekend that's expected to be extremely busy, #CHEO is announcing more measures we're taking to deliver the safest care & best possible experiences for patients & families who need us: https://t.co/oSkXB2Q5mB pic.twitter.com/oAVnBVl9vI

Dozens of Muslim philanthropic groups and several civil liberty organizations are urging Prime Minister Justin Trudeau to ensure that the Taxpayers’ Ombudsman office can access all the information it needs to conduct a systemic review of how the Canada Revenue Agency treats and audits Muslim-led charities, after a 2021 report accused the CRA of 'implicit biases and practices.'

Three Liberal ministers have declined invitations to testify at the Senate as the upper chamber probes why Canada still won't allow humanitarian workers to help in Afghanistan.

Can Ukraine pay for war without wrecking its economy?

Even as Ukraine celebrates recent battlefield victories, its government faces a looming challenge on the financial front: how to pay the enormous cost of the war effort without triggering out-of-control price spikes for ordinary people or piling up debt that could hamper postwar reconstruction.

Welcome to the knockout rounds of the World Cup as the final 16 teams vie for soccer’s most coveted trophy. Netherlands, USA, Argentina and Australia all face elimination if they don’t win. CTVNews.ca takes a look at everything you need to know on Day 14 of the tournament.

The body of a man has been recovered following an industrial accident in Mississauga on Friday, Peel Regional Police say.

Canada features in list of 23 best places to go in 2023, according to Conde Nast Traveller

Canada's British Columbia features in a list of the 23 best places to travel in the world in 2023. The list was created by travel magazine Condé Nast Traveller.