'Hung Parliament' could give Governor General tricky line to walk 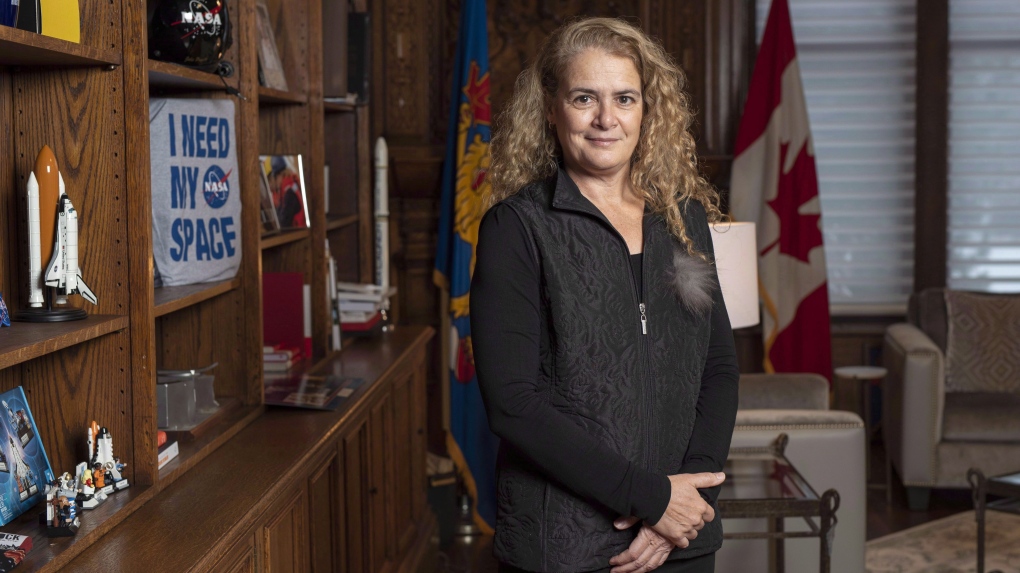 Gov. Gen. Julie Payette stands next to a shelf featuring memorabilia from her career as an astronaut, in her office at Rideau Hall in Ottawa on December 11, 2018. THE CANADIAN PRESS/Justin Tang

OTTAWA — With Canada facing a potential minority government after votes are cast Monday, Governor General Julie Payette, the former astronaut who has shown a propensity for bucking tradition and doing things her own way during her two years in office, could have a critical role to play in what follows.

While much of what Payette does immediately after the ballots are counted is dictated by constitutional convention and custom, there are questions about how she would manage concerted attempts by the Liberals or the Conservatives to take first crack at forming a minority or coalition government.

Constitutional experts have widely rebutted Conservative Leader Andrew Scheer's assertion that the party that wins the most seats gets the first shot. Constitutional convention dictates the incumbent prime minister — in this case Liberal Leader Justin Trudeau — can make the first attempt to form a government that can command majority support in the House of Commons.

A report prepared by the Library of Parliament in 2015 and provided to The Canadian Press by Rideau Hall indicates the same thing, adding where the governor general becomes involved is if and when the incumbent prime minister is unable to win a vote of confidence.

“Her role here is quite circumscribed while her prime minister is still deciding what he wants to do,” says Philippe Lagassé, an expert on Westminister governments at Carleton University. “The question becomes: Does she act within convention or not? And that's where it gets a little fuzzy.”

There is no real reason at this point to believe Payette would not follow convention and allow the political process to play out.

Yet Payette's first year at Rideau Hall showed her to be very different from many of her predecessors: she broke the tradition that saw viceregals visit all provinces and territories in their first years and announced her plan to skip last year's Governor's General History Awards.

There were also allegations that she had intentionally scaled back her public events and micromanaged her staff at Rideau Hall and there were reported delays for non-profit groups to find out whether Payette would continue past tradition and serve as their honorary patron.

Those criticisms have largely faded over the past year, but they nonetheless showed her to be a different type of governor general from many of her predecessors. Perhaps especially David Johnston, the law professor and constitutional expert whom she succeeded in October 2017.

One thing that Payette has followed her predecessors in doing is to meet with constitutional scholars and legal experts ahead of the election call to better understand her role and the scenarios she might have to address.

“Given the importance of the role of the governor general in federal elections, Her Excellency has met with constitutional experts to advise her on these matters on a regular basis throughout her mandate, as has always been done,” said Rideau Hall spokeswoman Natalie Babin Dufresne.

While experts are largely united in asserting that Trudeau gets the first crack at forming government in a minority situation, one question is, if his party wins more seats than the Liberals do but fails to secure a majority government, how far will Scheer push his own position.

Scheer spent the latter part of last week asserting Trudeau should resign if the Liberals end up with fewer seats than the Tories. Upping the ante, the Conservatives sent an email to supporters alleging the Liberals were “already planning to take power without winning the election.”

The email appeared aimed at urging Conservative supporters to actually vote, but it also continued what appears to be a concerted public-relations effort to give Scheer — constitutional convention or not — the first shot at forming government if the Tories win the most seats.

It is in this scenario that Payette could find herself immediately under the microscope, should Scheer press his case directly with her.

Convention says she would not have to step in unless Trudeau, who appointed her, was not able to survive a confidence vote. Yet while experts said it would be inappropriate for Payette to communicate with Scheer unless Trudeau could not form a government — she deals only with the prime minister until he or she is not the prime minister any longer — there would be nothing to stop the Tory leader from asking her in writing to let him form government. And that could put her in a tough spot: respond or not?

The last time a governor general found herself in the midst of a political crisis was in 2008, when Stephen Harper successfully asked Michaelle Jean to prorogue Parliament to prevent a non-confidence vote in the Commons, aimed at installing a Liberal-NDP coalition supported by the Bloc Quebecois.

While he felt Jean ultimately made the right decision, University of Waterloo constitutional law expert Emmett Macfarlane said what was lacking at that time was clear communication from Rideau Hall to Canadians on the reasons and rationale for her controversial decision.

That said, both Macfarlane and Lagassé cautioned against Payette's being drawn into a political battle, suggesting the situation could be fraught with peril should Scheer or any other leader start pressing against convention — or suggest her actions are being driven by partisan politics.

Acknowledging that attempts to politicize and misrepresent her role “would be deeply problematic,” Macfarlane argued that Payette “would be making a mistake to react too forcefully or visibly to even political attacks on her office.”

“If she releases a public statement to rebuke him or to at least disagree with him, how does that look? That might actually exacerbate the situation.”

Rather, Macfarlane's advice would be to let the political situation play itself out until she is forced to make a decision, at which point both Macfarlane and Lagassé believe some type of statement explaining her rationale might be appropriate.

This report was first published by The Canadian Press on Oct. 21.