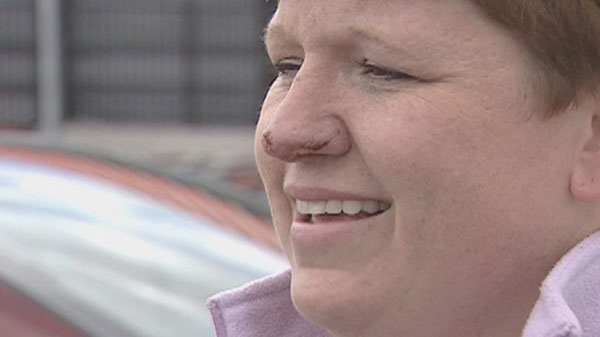 Anne Riel is recovering well after a dog bit off the tip of her nose at a Home Depot store in Ottawa. She had her stiches removed, Wednesday, April 20, 2011.

Home Depot is banning pets from all their Canadian stores after an Ottawa employee had the tip of her nose bitten off by a customer's dog.

The company says it is moving forward with the policy in the interest of employee and customer safety.

"We believe this is the best decision for the shopping enjoyment and safety of all customers," the company said in a statement released on Thursday.

Home Depot says the policy has been announced at all stores and the change will take place over the next few weeks.

By May 16, no pets will be allowed in any Home Depot store in Canada, with the exception of service animals.

The updated policy follows an incident involving an employee at an Ottawa Home Depot store on Cyrville Road.

Anne Riel was greeting customers last week when she welcomed a woman and her pet Shih-Tzu into the store.

The dog was in a shopping cart and when Riel bent down to pet the dog, it jumped up, biting off the tip of her nose.

Riel was rushed to hospital where she received plastic surgery. She got her stitches removed Wednesday and her nose is healing well.

"It's a fluke thing -- who gets bit by a dog when shopping, but its safety number one," Riel told CTV Ottawa on Thursday.

Although Riel is grateful for Home Depot's quick response, she says she will miss some of the pets that came through the store.

"It was one incident, it's not all dogs," she said. "There was one that came in this morning; he came and gave me kisses."

The dog that bit Riel must now be muzzled. The dog's owner has also been fined $610.

With a report from CTV Ottawa's Alyshah Hasham