Ottawa police moved to cut off fuel supplies to the "Freedom Convoy" demonstrators occupying downtown Ottawa, hours after Mayor Jim Watson declared a state of emergency due to the ongoing demonstration.

Dozens of armed police officers and firefighters moved into a parking lot at the Ottawa Baseball Stadium on Coventry Road just before 7 p.m. Sunday, seizing 3,200 litres of fuel being stored in the parking lot.

"They swooped in, it sounds like, quite quickly and took all the propane and all the fuel and left, in a very big show of force," reported CTV News Ottawa chief anchor Graham Richardson.  "Some of the truckers are quite angry, started yelling at me. They're clearly not happy."

Police have said the stadium five kilometres away from Parliament Hill has been turned into a staging area for the demonstration over COVID-19 vaccine mandates and other public health measures.

Police have also said several people were arrested downtown on mischief charges for transporting fuel to demonstrators. Deputy Chief Steve Bell told CTV News at Six this is the next step in the enforcement to deal with the ongoing protest downtown.

"Look at how we limit things moving in and out of the protest area," Bell said.

"We’ve really focused and targeted on removing the access of gasoline to the area and we’ve had several seizures and several arrests related to that.”

Ottawa police said seven people were arrested on Sunday, and 100 tickets were issued.

Two people were arrested on Coventry Road for mischief.

"Multiple vehicles and fuel have been seized," police said. "Officers arrested three individuals at Metcalf and Slater for mischief. The investigation is ongoing and updates will follow."

Police said two more people were arrested Sunday morning – one charged for driving while prohibited, the other for mischief relating to property damage at a downtown business.

More than 100 tickets were issued in the demonstration zone on Sunday, including for excessive honking, driving the wrong way, defective muffler, no seatbelt and having alcohol readily available.

Sunday afternoon, Watson declared a state of emergency over the 10-day demonstration that has blocked Wellington Street and other streets around Parliament Hill.

"Declaring a state of emergency reflects the serious danger and threat to the safety and security of residents posed by the ongoing demonstrations and highlights the need for support from other jurisdictions and levels of government," said a statement from the city.

"It also provides greater flexibility within the municipal administration to enable the City of Ottawa to manage business continuity for essential services for its residents and enables a more flexible procurement process, which could help purchase equipment required by frontline workers and first responders."

During an interview on CTV News at Six, Watson noted the city declared a state of emergency during the flooding in 2019 and at the start of the COVID-19 pandemic.

"A state of emergency is an administrative tool we have at the municipal level to cut the red tape in the procurement policy and bylaws, so if we need equipment we can get it right away without going through a tender process," Watson said.

The mayor said he spoke to all councillors about the move before the announcement.

"From the standpoint of a legal authority, the declaration of an emergency under the Emergency Management and Civil Protection Act does little," said city solicitor David White, adding there would be no additional authority to the city or police.

"It may provide some relief from some of the strictures that we operate under from a procurement standpoint, but it does not imbue the mayor or the city with any additional legal authority."

On Sunday morning, an estimated 500 trucks and vehicles remained in the so-called 'red zone' in downtown Ottawa, with hundreds of people remaining in the area to protest COVID-19 vaccine mandates.

Speaking on Newstalk 580 CFRA's CFRA Live with Andrew Pinsent Sunday morning, Watson said the downtown area is "out of control", with protesters taking over the downtown core.

"The situation at this point is completely out of control because the individuals with the protest are calling the shots," Watson said. "They have far more people than we have police officers and I've indicated to the chief that we have to be much more nimble and proactive when it comes to these activities."

Police and Bylaw Services officers issued more than 450 tickets between Saturday morning and Sunday morning, including for excessive noise and fireworks.

On Saturday, Ottawa's police chief admitted the force doesn't have enough resources to address the situation.

On Saturday, an estimated 5,000 people and 1,000 tractor trailers and personal vehicles filled downtown Ottawa to join the protest.  Hundreds of people attended a counter-protest at Ottawa City Hall, calling for an end to the demonstration.

"This is a siege. It is a something that is different in our democracy than something I've ever experienced in my life," said Sloly.

"It's not a demonstration, it's not an occupation, it's something and we don't have a Police Act that can adequately or effectively address this circumstance."

Organizers of the demonstration said they would hold a press conference this afternoon, but they later told CTV News it was not invited.

In a statement, organizers said they would not be honking their truck horns Sunday morning.

"Out of respect for the Lord's Day, for members of our military who have sacrificed and who continue to sacrifice so much for our freedom, for the men and women in blue who are doing such a superb job protecting us, and as a gesture of goodwill, members of our Convoy will desist from the blowing of Horns tomorrow, Sunday from 9 a.m. to 1 p.m. Ottawa time," a news release said.

However, horns could still be heard downtown.

The Centretown Community Association says there has been an "appalling failure to protect and support" residents, businesses, churches and other organizations by Ottawa Police and the city of Ottawa during the "Freedom Convoy" demonstration.

"This is not a peaceful protest," said Huang. "It is an illegal occupation. These occupiers have used their vehicles to blockade downtown streets since arriving last week. They have displayed obvious symbols of hate, including Swastikas and Confederate Flags. They have defecated on a local residence bearing an LGBTQ pride flag."

The letter says that since the demonstration began, "the police and city have failed to enforce the law against occupiers, allowing them to engage in significant unlawful activity without penalty.

"Despite a reported $800,000 per day for extra resources, there is still an ongoing failure of the police to fulfill its mission to 'protect the safety and security of communities.'"

The Centretown Community Association calls on police and the city to take immediate action, including:

Protesters who built a wooden shed in a downtown Ottawa park moved it to the Ottawa Baseball Stadium five kilometres away, along with all the supplies.

People were packing up the "community kitchen" wooden shed and other supplies in Confederation Park Sunday morning under the watchful eye of Ottawa Police and NCC conservation officers.

The park located less than a kilometre from the "Freedom Convoy" demonstration on Parliament Hill had turned into a supply and staging area, with dozens of vehicles parked in the area and barbecues and supply tents set up.  Last Thursday, demonstrators began building a wooden structure, saying it was a community kitchen for anyone to get food or drinks. 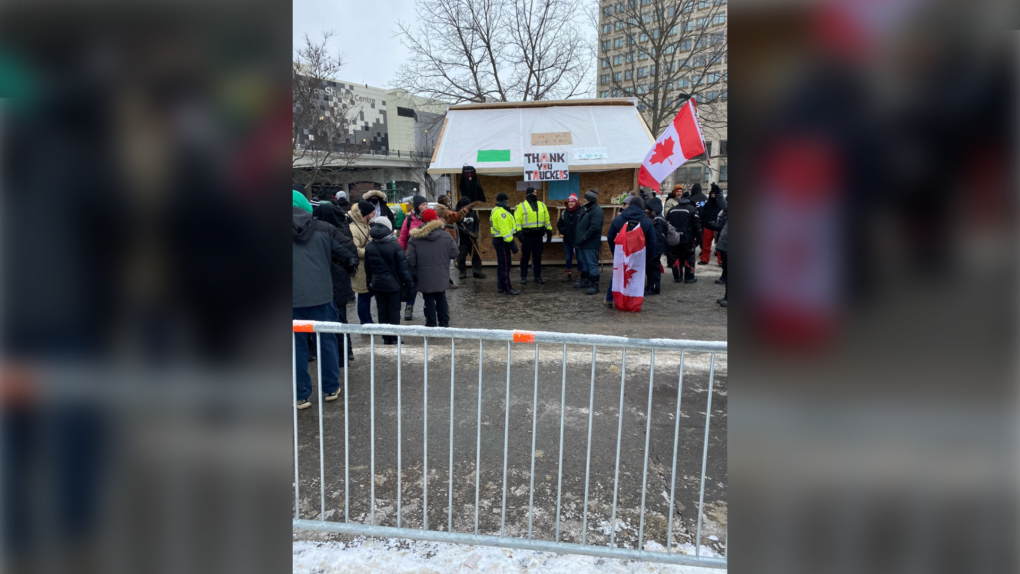 Ottawa Police and NCC Conservation Officers were at Confederation Park on Sunday, where demonstrators have set up a community kitchen and are storing supplies. (Natalie Van Rooy/CTV News Ottawa)

Several roads in the downtown core are closed from Rideau Street to Bay Street and Wellington Street to Albert Street.

Police warn the following off-ramps on Highway 417 may be temporarily closed: 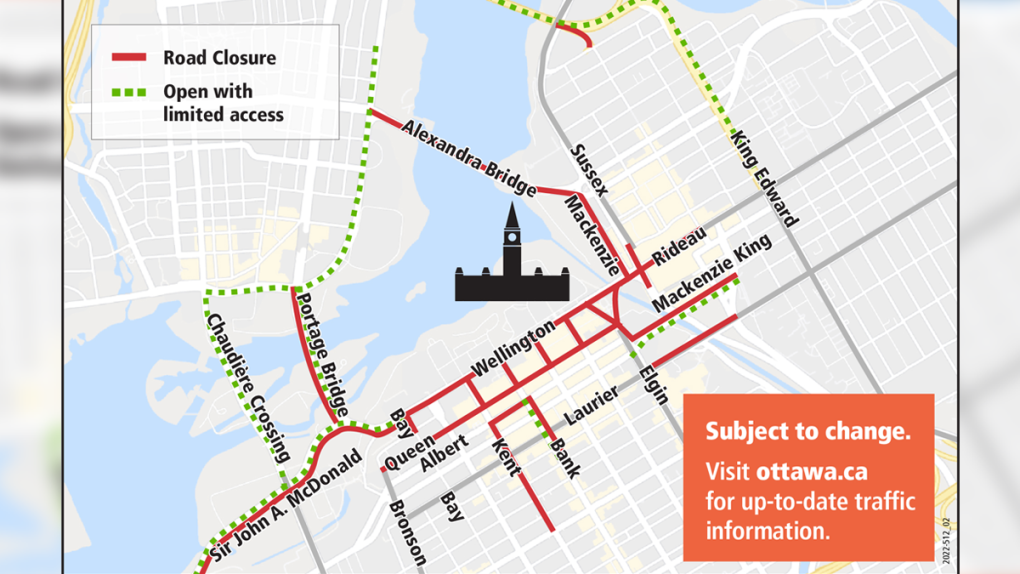 A look at road closures in Ottawa the weekend of Feb. 4-6. (Photo courtesy/City of Ottawa)

Mayor, councillor call on the federal government to step in

As the protest continues for a second weekend, Mayor Jim Watson is looking to the federal government for more help to end the protest.

"The federal government has an important role," said Watson during an interview on CTV News at Six. "They're going to have to sit down and have some kind of a discussion, some kind of mediation to get this situation resolved because it's now spreading across the country."

The mayor also commented on the bouncy castles and saunas being set up in downtown Ottawa and at the Ottawa Baseball Stadium.

"It's disturbing when you see the protest turning into what looks like some kind of fun carnival, where they've got bouncy castles and hot tubs and saunas," said Watson. "A complete insult to the people who are putting up with this nonsense for the last seven days and it shows a great deal of insensitivity."

Councillor Catherine McKenney, who represents part of the area affected by the demonstration, called on the prime minister to intervene.

"Dear Justin Trudeau please do something. You have a responsibility to protect your Capital. We are under siege. Day 9," they tweeted, while quoting a video of fireworks going off amid densely packed buildings in the downtown core.

In addition to the horns, demonstrators have been lighting off fireworks at night, prompting concern from some residents about the proximity to residential high-rises, as well as the fuel cannisters strewn about the area.

Last week, McKenney wrote a letter to the prime minister, calling on the federal government and the RCMP to assume full operational control of Parliament Hill and the Parliamentary Precinct.

BREAKING | Ontario woman sexually assaulted by Jacob Hoggard says she is suing him for $2.8M

Starting Thursday, businesses in Canada will soon be able to pass credit card fees on to their customers, thanks to a multimillion-dollar class-action settlement involving Visa and Mastercard.

Eric Weinberg, an executive producer and writer for the hit TV show 'Scrubs' and many others, has been charged with sexually assaulting five women that he lured to photo shoots and there could be many more victims, Los Angeles County prosecutors announced Wednesday.

As the holiday season approaches, food banks across Canada are desperate for donations due to an increasing amount of clients. As inflation hits all Canadians, those who feel the impact most are the vulnerable communities with the highest food insecurity rates.