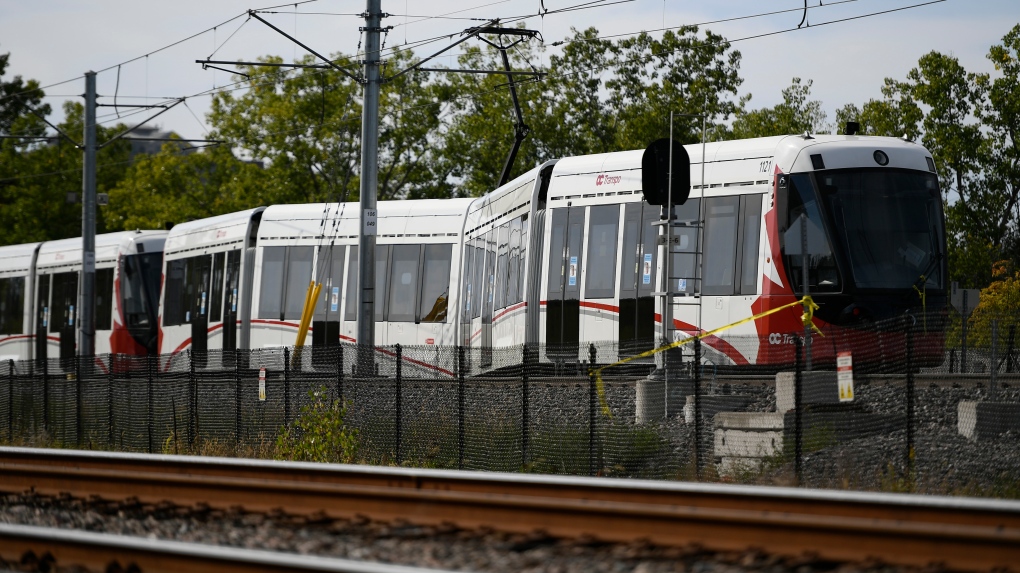 An OC Transpo O-Train is seen west of Tremblay LRT Station In Ottawa on Monday, Sept. 20, 2021 after it derailed on Sunday. (Justin Tang/THE CANADIAN PRESS)
OTTAWA -

However, Steve Kanellakos is denying social media rumours the Confederation Line will be shutdown another four months following the derailment two weeks ago.

The Confederation Line has been out of service since Sept. 19, after an LRT car derailed near Tremblay Station, damaging the car, the track and rail infrastructure.

A social media account said an anonymous driver said an OC Transpo supervisor indicated the O-Train would be down till mid-February because Rideau Transit Maintenance did not have the parts to quickly repair the infrastructure.

In a memo to councillors and transit commissioners addressing social media rumours and the LRT shutdown, Kanellakos said, "I will confirm that this information is not accurate."

"We have been in regular discussions with RTG and RTM into this weekend and there is no indication that they don’t have the necessary parts and/or materials to complete the infrastructure repairs," said Kanellakos in a memo obtained by CTV News Ottawa.

Rideau Transit Maintenance suggested on Sept. 20 that the LRT would be out of service for at least three weeks due to the damage caused by the derailment, and no update has been provided since.

"They are working on a comprehensive timeline for both the infrastructure repairs and the return to service of the trains," said Kanellakos on Sunday. "We will be updating Council and the Transit Commission as soon as we have the information."

The city of Ottawa is currently looking to retain a firm to conduct an independent safety review of the LRT system and the return to service plan.

On Sept. 24, the city announced STV Inc. would be hired to conduct a third-party review. However, Kanellakos announced on Sept. 28 that STV would not conduct the review after questions were raised about its independence.

STV provided consulting services during LRT construction, leading critics to suggest their review would not be truly independent.

Queen Elizabeth II made a surprise visit Tuesday to a train station in central London to see a newly completed subway line named in her honour. The 96-year-old monarch, who has reduced most of her public engagements, appeared Tuesday at Paddington Station.

Toronto Maple Leafs winger Mitch Marner was the victim of an armed carjacking outside a movie theatre in Etobicoke on Monday night, multiple sources confirm to CP24.