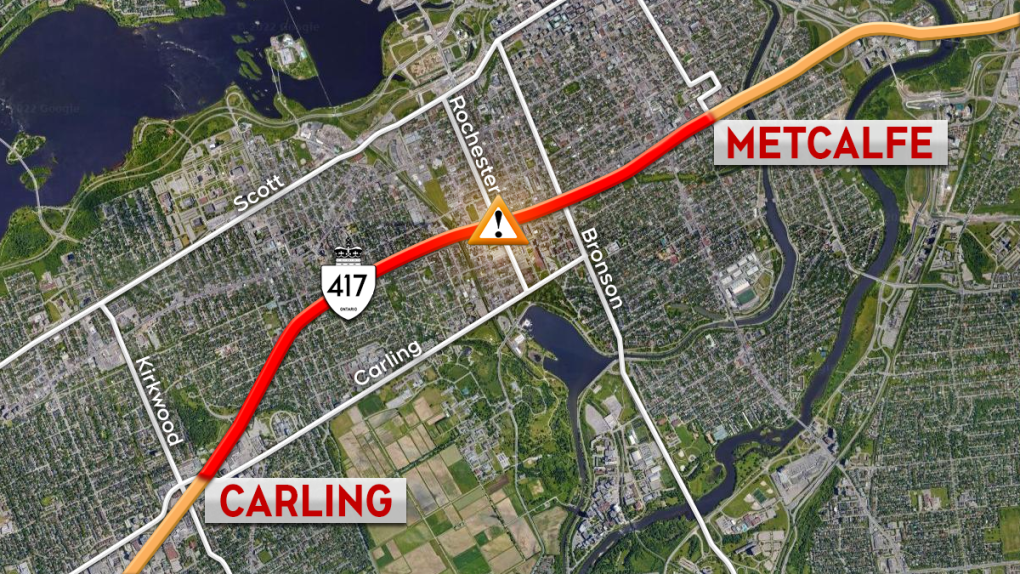 All eastbound and westbound lanes of Hwy. 417 between Metcalfe Street and Carling Avenue/Kirkwood Avenue will be closed from Sept. 30 at 8 p.m. until Tuesday, Oct. 4 at 6 a.m. for the replacement of the Rochester Street bridge.

A five-kilometre section of the Queensway through Ottawa will be closed for 82 hours this weekend for the replacement of the Rochester Street bridge.

All eastbound and westbound lanes of Hwy. 417 between Metcalfe Street and Carling Avenue/Kirkwood Avenue will be closed from Friday, Sept. 30 at 8 p.m. until Tuesday, Oct. 4 at 6 a.m. for the work.

The Rochester Street Bridge replacement was originally scheduled for Aug. 12-14, but work was delayed due to a strike in the construction sector.

Kiewit Dufferin Midtown Partnership has been retained by the Ministry of Transportation to replace the bridge.

In August, Hwy. 417 was closed between Metcalfe and Carling/Kirkwood Avenues for 76 hours while crews replaced the Booth Street Bridge.

HERE'S A LOOK AT THE DETOURS ON HWY. 417 THIS WEEKEND

Several city streets will also be closed this weekend as part of the construction.

Just a reminder, a section of the Sir John A. Macdonald Parkway will be closed to vehicle traffic from 8 a.m. to 4 p.m. Saturday and Sunday for the NCC bike weekends.

The federal government appears to be on the verge of presenting new legislation aimed at strengthening Canada's early learning and child-care system. On Thursday at 11 a.m. ET, Minister of Families, Children and Social Development Karina Gould will be making what her office is calling a 'national announcement' on this topic.

Two organizers of the 'Freedom Convoy' won’t receive frozen donation funds to pay for their legal defence of a $300-million potential class-action lawsuit.

$1,048 meal: Torontonian has the most expensive Uber Eats order in Canada this year

A newly released report from Uber Eats shows that a Torontonian ordered the most expensive meal through the app in Canada this year, spending $1,048 at burger joint.

The monarchy braced for more bombshells to be lobbed over the palace gates Thursday as Netflix released the first three episodes of a series that promises to tell the 'full truth' about Prince Harry and Meghan's estrangement from the Royal Family.

A new bill on early learning and the child-care system is expected to be announced by Canada's families minister, Ottawa will be reviewing an RCMP contract with a company linked to the Chinese government, and what the latest Bank of Canada rate hike means for inflation and consumers. Here's what you need to know to start your day.