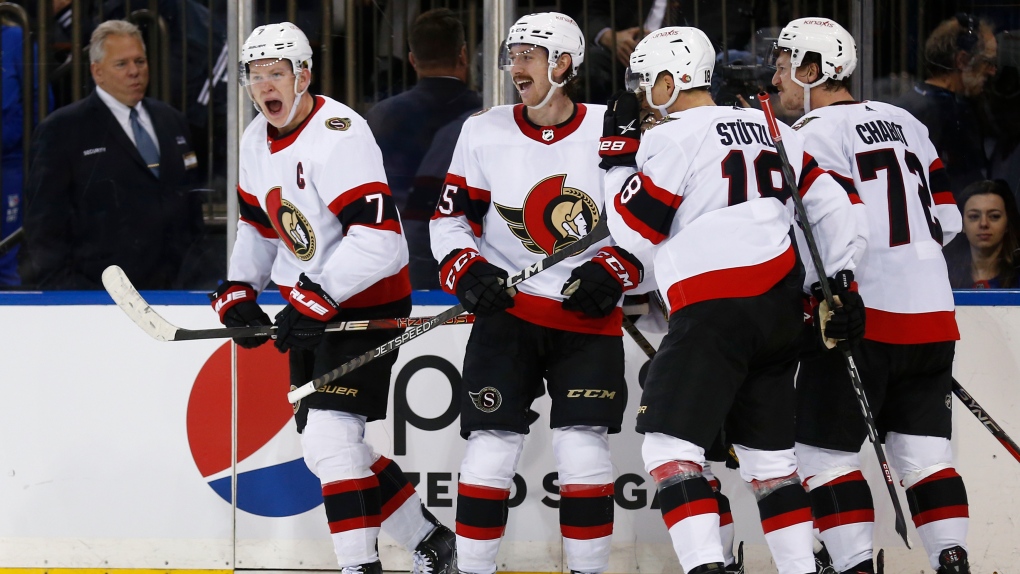 Brady Tkachuk scored the tying goal for Ottawa in the final minute of regulation and won it with a backhander with 17.4 seconds remaining in overtime as the Senators beat the New York Rangers 3-2 Friday night.

Tim Stutzle also scored for the Senators, who rebounded from a 3-1 loss at home to the Rangers on Wednesday and won for third time in four games. Cam Talbot had 25 saves, including a stop on Mika Zibanejad on a breakaway with 1:34 left in the extra period.

Tkachuk skated in on a breakaway late in overtime, shook off the Rangers' Artemi Panarin and beat Igor Shesterkin for his 11th of the season to get the win in his 300th career game.

"It's definitely going to be memorable," Tkachuk said of his milestone. "Everybody stepped up in here tonight. It was a huge game for us, a huge game for our confidence. Hopefully now we get on a little bit of a run."

Zibanejad and Vitali Kravtsov scored in regulation as the Rangers lost for the fourth time in five games (1-3-1). Shesterkin had 34 saves in losing his third straight start.

"I didn't think we played good enough in the first or second (periods)," Zibanejad said. "We did a little bit better job in the third, but its definitely disappointing to do that especially with Shesty giving us a chance to win."

With the score tied 1-all after two periods, the Rangers' Vincent Trochek had a shot go off the crossbar during a power play about 5 minutes into the third.

Zibanejad then gave the Rangers the 2-1 lead at 6:03 with his 12th after Senators defenseman Artem Zub took a shot from Chris Kreider in the face. The puck bounded to Zibanejad, who put it in for his 12th with Zub on the ice holding his face.

Ottawa had a goal disallowed for the second time in the game when a sprawled Shesterkin jammed an attempt by Motte under his right skate against the post and then had his leg pushed into the net with the puck under it with 7:18 left. After a review, officials deemed the play was dead as Shesterkin held the puck under his skate long enough and the no-goal stood.

The Senators pulled Talbot for an extra skater with about 1:45 left, and tied it 2-2 when Tkachuk deflected a long shot by Thomas Chabot out of the air and past Shesterkin with 48.4 seconds left. It was his 100th career goal.

"He stayed with it all night," Smith said of the team's captain. "Not much more you can ask of a guy. ... He's an elite net-front guy in the NHL with obviously a physical presence. There's not a ton of guys that want to move him out of there and he's getting better and better with his hands."

Trailing 1-0 after 20 minutes, Giroux appeared to tie it for Ottawa on the rebound of a shot by Tkachuk with 8:46 left in the second. However, the Rangers challenged for offside on the play and the goal was erased after a review.

The Senators tied it 12 seconds into their third power play 1:02 later as Stutzle backanded a loose puck from the right side for his ninth.

Kravtsov got the Rangers on the scoreboard with 9:29 left in the opening period. His initial shot hit Ottawa defenseman Travis Hamonic in the neck and the puck came back to Kravtsov, who gathered it and fired it in off the right post for his first of the season.

Hamonic was down on the ice for several minutes before being helped up.

Artemi Panarin and Adam Fox had assists on Kravtsov's goal to keep them tied for team highs in assists (20) and points (26).

Rangers: Host Chicago on Saturday night in the middle game of a three-game homestand.

The Canadian economy grew by 0.1 per cent in November as higher interest rates began to slow spending toward the end of the year.

Pakistani authorities scrambled Tuesday to determine how a suicide bomber was able to carry out one of the country's deadliest militant attacks in years, unleashing an explosion in a crowded mosque inside a highly secured police compound in the city of Peshawar. The death toll from the blast climbed to 100.

A Russian company said it will offer five million roubles (US$72,000) in cash to the first soldiers who destroy or capture western-made tanks in Ukraine, after the Kremlin vowed Russian forces would wipe out any Western tanks shipped to Ukraine.