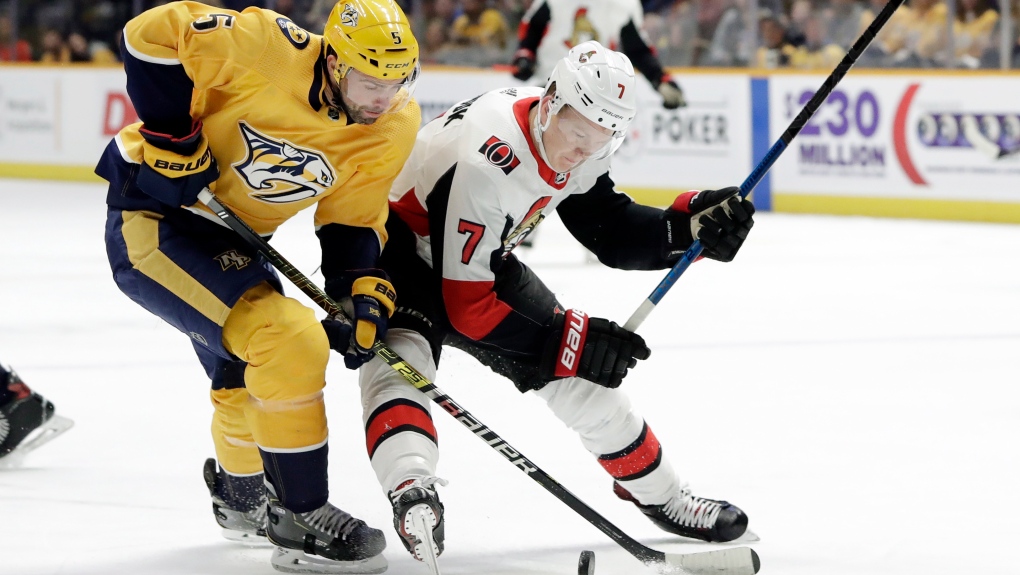 NASHVILLE -- Ryan Ellis scored his first game-winning goal of the season, Pekka Rinne made 25 saves and the Nashville Predators defeated the Ottawa Senators 3-1 on Tuesday night.

Zack Smith scored for Ottawa, which has lost four of five.

Nashville improved its record against Eastern Conference opponents to 9-0-0 this season.

Zack Smith scored the first goal on the game's first shot just 26 seconds into the opening period. Carrying the puck into the Nashville zone on the right side, Smith sent a backhand from the left faceoff dot by Rinne on the far side.

From the left boards, Mattias Ekholm sent a shot toward the Ottawa net. In the low slot, Watson tipped the puck high to the glove side of Senators goaltender Craig Anderson for his sixth goal of the season.

Ellis hooked up with defensive partner Roman Josi on a give-and-go at 9:01 of the second to give Nashville a 2-1 lead.

At the right point, Ellis sent a pass to Josi on the right boards. From there, Josi tapped the puck back to Ellis skating through the slot, where he snapped a one-timer over Anderson's left shoulder.

Rinne made his best save in the final minute of the second period when he denied Brady Tkachuk's attempt from just outside the Nashville crease.

Craig Smith made it 3-1 at 1:59 of the third when skated into the Ottawa zone along the right boards. Near the goal line, he cut toward the Senators net and slipped a backhand past Anderson inside the near post.

NOTES: D Stefan Elliott played his first game with the Senators since being acquired from Pittsburgh in a Dec. 5 trade. ... Nashville C Colton Sissons had an assist, extending his point streak to three games. ... The Predators have defeated Ottawa five consecutive times in Nashville. ... The Senators are 8-7-3 when scoring first this season. ... One night ahead of their induction into the U.S. Hockey Hall of Fame, Red Berenson, Natalie Darwitz, Paul Stewart and Predators general manager David Poile attended the game.

Senators: At the Detroit Red Wings on Friday.