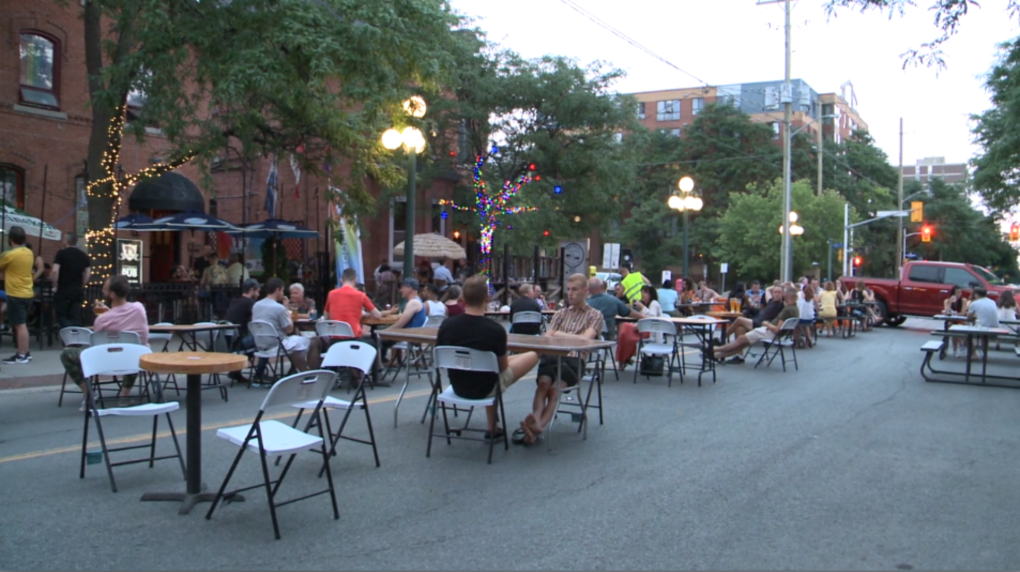 OTTAWA -- A plan to expand restaurant and bar patios on a stretch of Somerset Street West is being hailed as a success after the first night.

Somerset Ward Councillor Catherine McKenney announced Friday that Somerset would be closed between Bank and O'Connor on Friday evenings and most of the day on weekends. The aim was to provide more space for physically distanced patios for pubs and restaurants during the COVID-19 pandemic.

The restaurants and bars along Somerset Village (Bank to O'Connor) are taking over the street! 5pm to 11pm Friday; 12pm to 11pm Saturdays and Sundays you'll find the block closed to provide more space for patios and safe pedestrian access. See you there! pic.twitter.com/aLJ2u2xNbh

"I think that its going to be great for the summer and I anticipate we’re going to see much more of it going forward," McKenney told CTV News on Saturday. "This is what people want. It’s good for businesses, its good for residents and I’m pretty excited about it."

Friday was the first night of the closure, and restaurateurs tell CTV News it went well.

"We did our first extension out last night and it was quite successful for us," said Les Cameron, co-owner of T's Pub. "We still have all our tables socially distanced apart but just people seeing people and getting out there and seeing each other is uplifting. You see all these happy people, it brings everybody’s spirits up."

"It’s was great, we didn’t do any advertising. People were just kind of wandering upon it and discovering it and seemed to be really enjoying it. It was a beautiful night too so that certainly helps," he said.

McCabe is hopeful the expanded patios help keep businesses in the area afloat.

"If this didn’t happen, I know a couple of those staples that are well known in the Ottawa scene, they were ready to throw in the towel," he said. "There was just really no other option at that point. So, I think it's going to help save some of those fantastic restaurants on that strip and hopefully we all kind of recover and better days ahead in 2121."

The City of Ottawa, he said, has been helpful.

"The city has actually been really awesome. Just waiving the red tape completely. No bureaucracy really, just making sure that the safety measures were in place."

Ivan Getz, co-owner of Union Local 613 said the night brought a nice vibe to the community.

"There was this gentle hum. There was no music. Just this beautiful, quiet hum of people, ya know, socially distanced but it felt great man, it was cool," he said.

Getz, too, is worried about the pandemic's effect on business, but is hopeful the extra patio space helps.

"Putting butts in seats is how restaurants make money. It allows us to survive," he said. "Our hope is that we can stock pile a little bit of cash because there’s a huge unknown coming in September."

It remains unclear when dine-in service will be allowed in restaurants in Ontario. The provincial government is actively discussing plans for when regions will be allowed to enter stage 3 of the province's reopening framework.

According to the Ford government, stage 3 would see, "Reopening most remaining workplaces and community spaces, while carefully and gradually lifting restrictions. Public health advice and workplace safety guidance will remain in place and available. Large public gatherings will continue to be restricted."