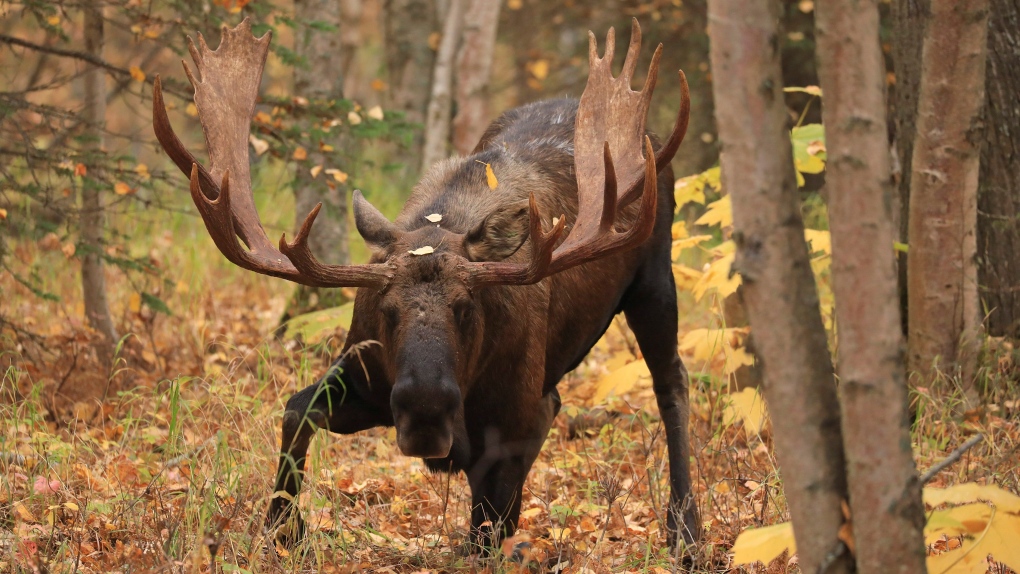 In this Oct. 2, 2018, photo taken, a mature bull moose begins to stand up in forest at Kincaid Park in Anchorage, Alaska. (AP Photo/Dan Joling, File)

Police in the Ottawa Valley are reminding drivers to keep an eye out for wildlife after responding to seven collisions involving animals last week.

The crashes from Sept. 20 to 24 involved four deer, a bear, a moose and a dog, Killaloe OPP said in a news release. There were no injuries to any of the drivers.

“If you spot an animal on the road ahead, stay in control, reduce your speed as much as possible and steer in a straight direction,” police said.

“Avoid changing your direction quickly as this increases the risk of losing control, running off the roadway, and rolling your vehicle. This also increases the likelihood of sustaining greater damage to your vehicle and serious injury.”

Later that day, there was a crash involving a moose in Algonquin Park.

On Sept. 24, there was a collision involving a dog in Bonnechere Valley Township.

OPP are also reminding people to scan the ditches ahead of them, not just roads. You may spot wildlife approaching the road.

When you see one deer, expect to see more. If it’s nighttime, watch for glowing eyes.

Don’t veer for animals; instead reduce your speed quickly, steer straight and stay in control of your car.

And of course, slow down. The slower you’re going, the more reaction time you have if an animal enters the roadway.

A mass shooting survivor and spokeswoman for gun-control group PolySeSouvient says it is 'incredibly disrespectful' for firearm rights advocates to invoke the group's name in a merchandise sale discount code.

The deaths of four University of Idaho students nearly three weeks ago have riled up thousands of would-be armchair sleuths, many of whom are posting speculation and unfounded rumors about the fatal stabbings online.

After 300 hours of testimony, 9,000 exhibits and a few major revelations, the public portion of an investigation into the first-ever use of the Emergencies Act ended Friday with a deep dive into questions about government accountability and transparency.

Hockey Canada says there were more than 900 documented or alleged incidents of on-ice discrimination -- verbal taunts, insults and intimidation -- across all levels and age groups during the 2021-22 season.