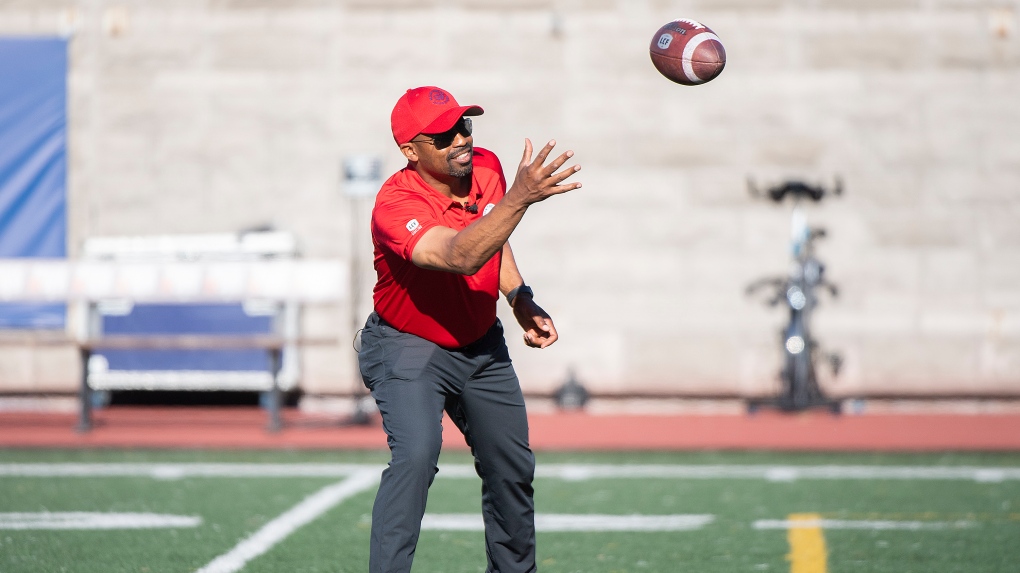 Khari Jones attempts to catch a ball prior to a CFL pre-season football game against the Ottawa Redblacks in Montreal, Friday, June, 3, 2022. (Graham Hughes/THE CANADIAN PRESS)

The Ottawa Redblacks have announced another major hire just one day after announcing their new head coach.

“I’m extremely pleased to have Khari join the Redblacks family,” newly named head coach Bob Dyce said in a statement. “KJ is a great communicator and teacher who brings a wealth of knowledge, experience and energy to Ottawa.”

Jones was also an offensive coordinator for Hamilton Tiger-Cats and B.C. Lions and quarterbacks coach of the Saskatchewan Roughriders, the latter of which won the Grey Cup in 2013.

During his CFL career as a quarterback, he played for four teams, but had the most success with the Winnipeg Blue Bombers. He retired as a Blue Bomber in 2007.

Jones will assume his new role as offensive coordinator and assistant head coach of the Redblacks in the 2023 season.

“I’m very happy and excited to be a part of Bob Dyce’s staff in Ottawa; I have known Bob for over 20 years and I am honoured to work with him again,” said Jones in a news release. “I can’t wait to help deliver a dynamic offence for RNation and help push us towards the collective goal of bringing a Grey Cup back to Ottawa.”

Parks Canada says visitors will be able to start booking reservations for camping and other activities at its sites across the country in March.

Police departments in the Maritimes say there are issues with 911 emergency calling Tuesday morning.

No need for every toxic chemical to have a pollution plan, Ottawa says

The federal government is playing a dangerous game by refusing to force any company that makes or uses toxic chemicals to have a plan in place to prevent them from getting into the environment, a lawyer for the Canadian Environmental Law Association said Monday.