A quick thinking Brockville dive master is being praised after rescuing a puppy from the chilly St. Lawrence River, who credits her water rescue training for kicking in to save the dog.

"I turned to call Flanker and I guess his little pink nose led him to this direction," Marko said, pointing towards the river. "Before I could say his name I saw his four little legs flip over the side of the wall."

In the darkness, Marko couldn't locate where Flanker fell, around three metres into the river below.

"I just started calling for help right away but there was nobody here," she said.

"It was very disconcerting because he was there one second and then all of the sudden he was gone and I ran to the edge and it was dark; dark and quiet so it was just the worst feeling," Marko recalled.

"Calling 'Help, help', I dialled 911 and asked for the fire department and then, tried to find Flanker," Marko said. "I got my light going on my camera, saw his little body swimming around in the water, so I was relieved a little bit and then kept calling and calling." 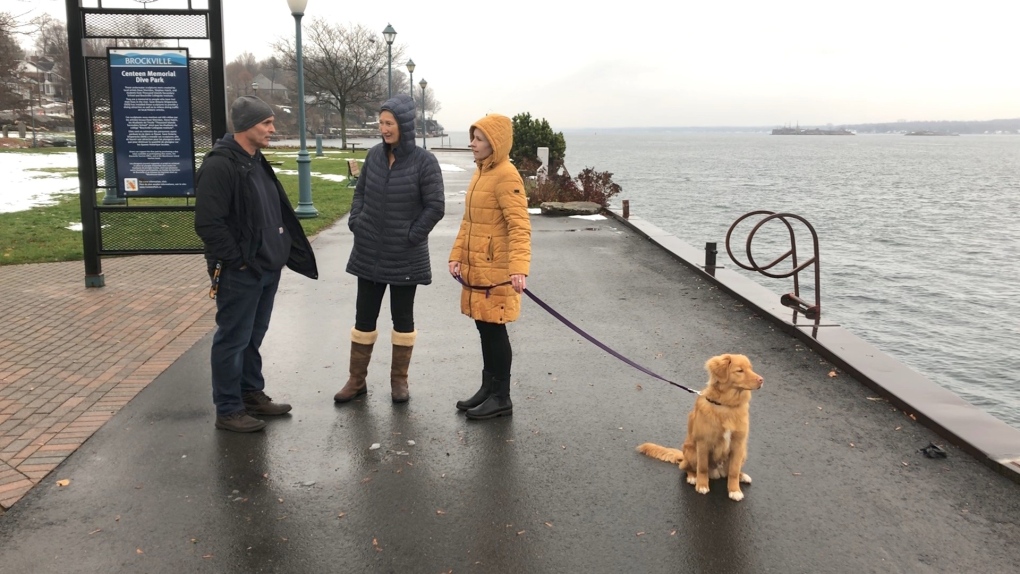 Luckily for Marko, someone did hear her cries for help.

Helen Cooper describes herself as a ship junkie, and had just finished taking a photo of a passing laker.

She heard the calls for help from her vehicle.

"I rolled my window down and sure enough I could hear somebody shouting, 'Help me, oh my gosh, please somebody help me I need help!'" Cooper recalled.

"I ran down and as I was getting closer I shouted out, 'What's going on', and there was a lady, Chelsea, down here and she shouted at me, 'My puppy, my puppy just fell in the water.'"

The owner of the Dive Brockville Adventure Centre, she says her rescue training as dive master kicked in immediately and she started climbing down a ladder to try to reach the puppy.

"He was just kind of swimming, his little nose was just above the water and I was like OK, he's getting tired, and he's cold," Cooper recalled.

"If I do have to go for a swim, I'm thinking I'll have to kick my boots off and get my coat off, but I reached out to grab him from the water because he was looking a little tired. He was swimming towards me, I grabbed him and pulled him in and he was just shaking like a leaf he was so cold," she said.

With the fire department on the way, Cooper waited on the cold metal ladder for help.

"I was at the bottom of the ladder with boots full of water," she said. "I managed to maneuver myself on the ladder to kind of get into a better position, which was good, and I shouted up at Chelsea at that point, I think, 'Tell them to hurry up because I don't know how long I can hold this position!'"

Once Capt. Craig Mason arrived on the scene, he helped get the dog to safety, and went around Cooper to help her up the ladder. Mason says the situation could have been much worse.

"When we were getting dressed at the station, getting the equipment ready, I said to the crew, 'Alright, it might be a recovery, right? We'll see, it depends on the current too,'" Mason recalled.

"While en route we got the update that now a person was in the water so it went from OK, let's go."

The water temperature was around 7 C, and hypothermia can set in quick, combined with shock and the stress of the situation.

"It was a little bit of a different incident to go to dealing with a person in the water along with a pet," Mason said. "I said to Chelsea after it was all said and done, I said this wasn't the ending I was expecting but it's a great ending." 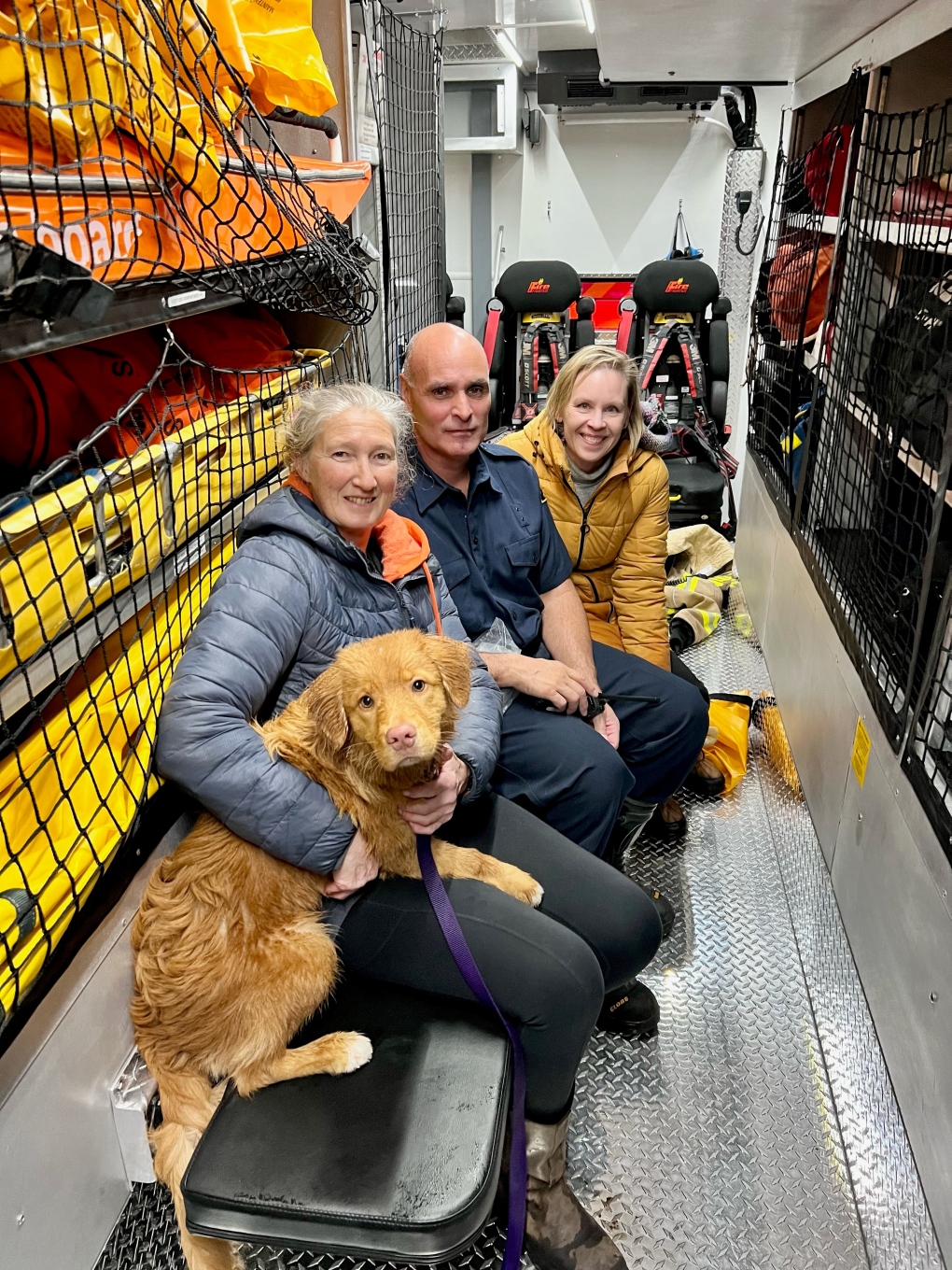 Helen Cooper, Brockville fire Capt. Craig Mason and Chelsea Marko in the back of the fire truck on Wednesday. (Submitted)

The three of them then had a quick warm up in the back of a fire truck, with Flanker no worse for wear.

"Really, Helen did an amazing job," Mason said. "She made our job that much easier that night. And Chelsea - calm, it was nice to have people like that, great community."

The trio met up in Centeen Park on Friday, praising Cooper once again for her quick thinking.

"I'm pretty sure she had a superhero cape underneath her coat because she didn't think twice, she just went for it," Marko said.

"I don't think that I'm superwoman or anything, I was just the one that was in the right place at the right time," Cooper replied. "I would like to think that others would have done the same thing that I did."

While Marko did have Flanker on a leash, it was one decision that almost ended in tragedy.

"I unhooked Flanker, we were playing around over there, nowhere near (the edge), just for a little extra skippity doo and have him be able to run a little free. We had a great time for the first couple minutes," she said.

"It could have ended totally different, so I'm just thankful for the quick response of the fire department and Helen was at the right place at the right time," Marko said.

A new bond now formed between the two women, all thanks to a mischievous little puppy.

"That's a lucky little puppy and I'm very, very happy it had a happy ending; and yeah, I think we're going to be seeing a lot of each other," Cooper said.

Calgarians at home and abroad are reeling in the wake of a massive earthquake that struck a war-torn region near the border of Turkiye and Syria.

As preparations are underway for the anticipated health-care 'working meeting' between Prime Minister Justin Trudeau and Canada's premiers on Tuesday, new details are emerging about how provinces anticipate the talks will unfold.

Two pilots are safe after a large air tanker owned by a Vancouver Island company crashed while battling wildfires in western Australia on Monday.

Google says Canadian employees affected by recently announced job cuts are being told today whether they have been laid off.

February's full snow moon, which first appeared this weekend, will light up the sky over the next two nights, with the spectacle already reaching full illumination on Sunday morning. But this year's full moon was smaller than those of recent years.

The tech industry started the year with a wave of job cuts, around 50,000 in January alone, and there doesn't appear to be any let up this month. Here's a look at some of the companies that have announced layoffs so far.