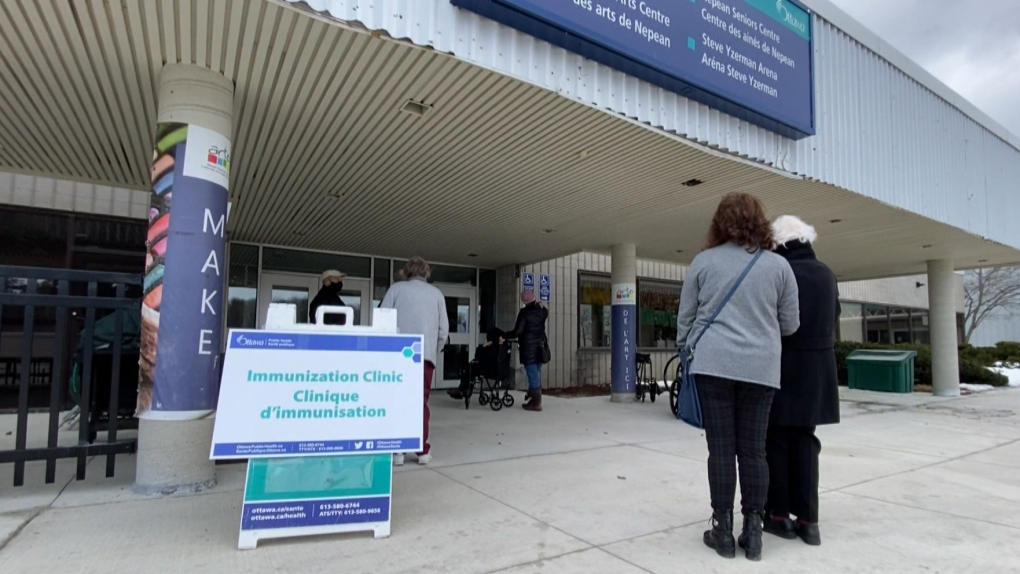 OTTAWA -- The Ontario Ministry of Health says about 10 per cent of planned appointments for COVID-19 vaccines at the Nepean Sportsplex were "rebooked" this week as it continues to deal with the fallout of a double-booking error earlier this month.

Several residents told CTV News Ottawa that representatives from the ministry called them Tuesday to cancel their appointments for Wednesday.

The double-booking error was announced March 19. The City of Ottawa said at the time it affected about 3,100 appointments for March 23 to 25.

In a statement to CTV News Ottawa, the Ministry of Health called the cancellations for Wednesday an isolated incident.

"Due to the scheduling issue identified two weeks ago, we have been working to reschedule a small number of COVID-19 bookings for Ottawa area residents. This is an isolated incident and we apologize for the inconvenience to those impacted," the statement said. "The call centre has rebooked approximately 10 per cent of clients from [Wednesday's] Nepean clinic. The remaining 90 per cent appointments will proceed at Nepean [Wednesday]."

However, residents who spoke to CTV News Ottawa said their cancelled appointments were not rebooked because there are no available appointments at this time. The city had about 12,000 appointments available Monday morning, when the Ontario portal expanded to anyone 70 or older, and they were booked solid by midday. The city says it is waiting for more vaccines to arrive.

"Due to the recent provincial announcements that vaccine bookings were available residents aged 70 and older citywide, all available appointments have been booked up until April 7," said Emergency and Protective Services General Manager Anthony Di Monte, the head of Ottawa's local vaccine rollout taskforce, in a statement to CTV News Ottawa. "As the City receives more vaccines from the Province and the provincial booking system is updated, more appointments will become available."

One resident said she fought against the ministry and demanded that her appointment go ahead.

Betty Thurston told CTV News Ottawa she received confirmation of her March 31 appointment at the Nepean Sportsplex on March 16.

However, just after 12:30 p.m. Tuesday, she says she received a call from the Ministry of Health advising her that her appointment had to be cancelled.

"I asked why, what was the reason," she explained, "and she couldn't give me a reason. So I fought it tooth and nail and said, 'I want my vaccine.'"

Thurston said the caller told her that the appointment would be cancelled and it could not be rebooked at this time. Thurston said she went back and forth with the person on the phone and was eventually told she'd have her appointment.

"I think I wore her down, the poor thing. I feel sorry now, but I was standing up for my right," Thurston said. "I told her to cancel someone else's appointment and she said she wouldn't call back. So, I asked, 'does that mean I'm showing up for my appointment?' and she said, 'yes.'"

Thurston said she doesn't know what will happen but she intends to show up at the Nepean Sportsplex on Wednesday for her appointment as scheduled.

To date, Ottawa has received 136,140 doses of COVID-19 vaccines from the province, according to public figures from Ottawa Public Health, and has administered more than 120,000 shots. Di Monte said last week Ottawa was expecting up to 44,000 doses from the province this week.

Ottawa's COVID situation ‘the worst that it’s been to date’