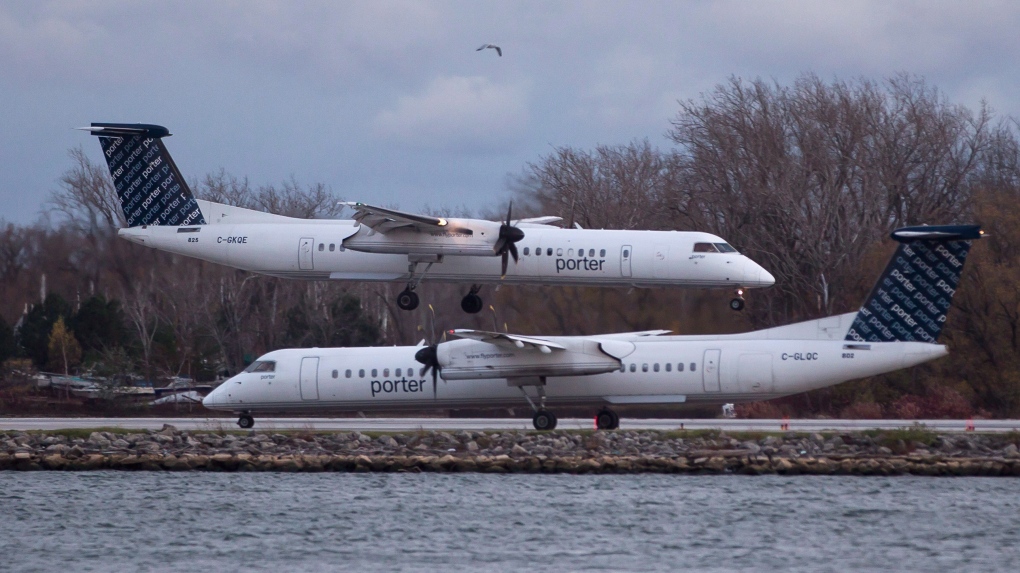 A Porter Airlines plane lands next to a taxiing plane at Toronto's Island Airport on Friday, November 13, 2015. THE CANADIAN PRESS/Chris Young

Ottawa travellers flying to Toronto on Porter Airlines will soon have a choice of two destination airports.

Porter Airlines is adding new flights between Ottawa and Toronto’s Pearson International Airport, part of a major expansion for the airline that will also bring it to western Canada for the first time.

Porter has operated flights between Ottawa and Toronto’s Billy Bishop airport since 2006. The new flights to Pearson—four daily, non-stop round trips—begin in February and start at $225.

The new flights are possible because of Porter’s acquisition of 50 Embraer E195-E2 planes. The airline is also introducing flights from Pearson to Montreal and Vancouver.

“Porter’s introduction of the E195-E2 provides the ability to operate throughout North America, including the west coast, better positioning us to serve the needs of many more business and leisure passengers,” Michael Deluce, Porter’s president and CEO, said in a statement.

“This investment introduces a new level of thoughtful service, unmatched by any other airline in North America. It will change the way passengers think about flying economy.”

A news release from Porter announcing the new routes also hinted at more destinations to come.

“Montreal and Ottawa will continue playing important roles in Porter’s network as new destinations are introduced in 2023,” the news release said.

Just like their current propeller plane flights, the new routes will offer free wine and beer, along with snacks. The new flights will also have free WiFi.

Last month, Porter announced plans to build two new hangars at the Ottawa airport to maintain its growing fleet. The first phase of construction is expected to be finished by the end of next year.

“As Porter’s inaugural destination in 2006, YOW is thrilled to be part of their Embraer E195-E2 introduction,” Ottawa International Airport Authority President and CEO Mark Laroche said in the news release. “With construction of Porter’s YOW-based maintenance hangar well underway, plus the resulting air service growth, this carrier’s commitment to YOW is unprecedented.”

The two new hangars, a $65-million project, will add about 150,000 square feet of space for Porter’s fleet.

Two children are dead and six others are injured after a Laval city bus crashed into a daycare Wednesday morning. The driver of the bus, a 51-year-old man, has been arrested and faces charges of homicide and dangerous driving, police say.

The sacrifices female killer whales continue to make for their sons well after they are weaned is negatively affecting their reproductive health, according to new scientific research.

Turkiye-Syria earthquake: How to give to rescue and recovery efforts

In the aftermath of the deadly earthquake that struck Syria and Turkiye, Canadians are donating money and supplies to rescue and relief efforts there. CTVNews.ca rounds up ways you can contribute to charities based in Canada and abroad.

An associate of Ontario’s self-described “crypto king” was operating his own fraud scam parallel to the multi-million dollar Ponzi scheme, court documents allege.