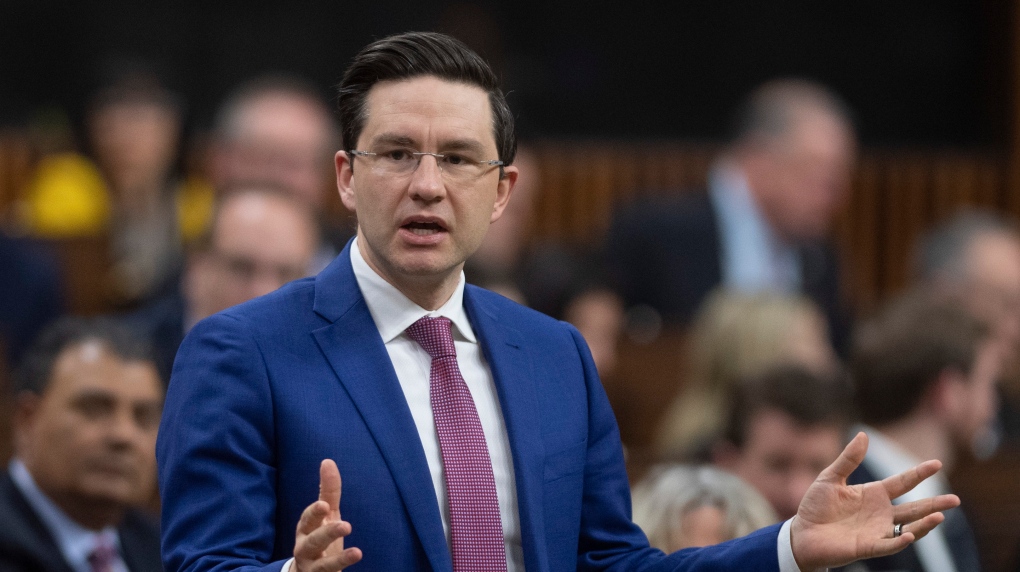 OTTAWA -- Carleton Conservative MP Pierre Poilievre says he's not in the House of Commons for Tuesday's historic vote on a COVID-19 aid package because he's awaiting his own test results for the virus.

In a video posted online early Tuesday afternoon, Poilievre said he's confident the test will come back negative, but he's "very disappointed" that he can't attend the House proceedings while he wait for the results of the test.

Earlier Tuesday, Poilievre had indicated there was a chance he would attend the vote if he received results beforehand.

Speaking on Newstalk 580 CFRA's The Morning Rush with Bill Carroll, Poilievre said he felt symptomatic and took a test last Thursday, but he still hadn't heard the results.

"If I get the results back before noon, I'll be in Parliament; if I don't, I’ll be at home," he said.

Poilievre, the Conservative finance critic, said there are issues he sees with the Liberal government's planned legislation, set to be tabled Tuesday afternoon.

"The ability of the government to have unlimited power to raise taxes, spending and debt, without any parliamentary approval for almost two years; that's what they're proposing," he said. "No other government in the world is doing this."

According to a draft copy of the bill, which was obtained by CTV News, it would -- if passed as worded -- allow the cabinet “temporary” powers related to borrowing fund and imposing and repealing taxes as well as increasing or decreasing a tax rate by regulation, without seeking parliamentary approval, “before 2022.”

Sources indicated late Monday, however, that the version of the bill to be tabled Tuesday would walk back some of those measures.

Government House Leader Pablo Rodriguez tweeted Monday evening that the Liberal government had "consulted the opposition" and would bring changes to the draft legislation.

Tomorrow, we’ll seek to pass the emergency response to the #COVID19. We consulted with the opposition and will bring changes to the draft legislation. We will always work collaboratively and respect the fundamental role of Parliament. #cdnpoli

Poilievre responded to the initial news Monday to accuse the government of a power grab in the midst of a crisis.

The Opposition agreed to close Parliament to protect health & let the gov respond to COVID-19. We agreed to let the economic relief package pass the House in 1 day. Unprecedented goodwill & leeway from opposition. The Gov is using it to grab up massive unneeded powers. HellNo

He told The Morning Rush the Conservatives would not support the bill if the measures to allow the government to spend money without parliamentary approval were removed.

"The Conservative Party has been overwhelmingly cooperative with the government," Poilievre said. "They said they needed to close Parliament about two weeks to stop the spread on Parliament Hill and let the government work undistracted on its response. We agreed to that. Then, they said we need an 80-billion dollar package to rescue small businesses, families, and the economy and we said, 'Great! We'll support it.' Then, they said, 'We'd like to come back to the House of Commons for three hours and pass that 80-billion dollar package with only about ten per cent of the MPs there,' and we said, 'It's extraordinary, but we'll do that, too.' Then, they gave us a copy of the bill and we said, 'Hell no.'"

Poilievre contends the fact that enough MPs can come to the House and vote on the spending bill proves the Government doesn't need the power to spend without the approval of Parliament.

"They said there could be enormous developments that come out of nowhere and they'd need to respond with economic packages on short notice," Poilievre said. "Our answer to that is, 'Great. You have our phone number. Give us a call. We'll meet you in the House of Commons on 48 hours notice and we'll pass it the very same day, if it's warranted. Parliament can act very quickly if it wants to."

In a hung parliament, the Liberals will be required to get the backing of at least one other opposition party to see this spending measure passed.

Poilevre said the Conservatives have a simple proposal.

"We're proposing that every single measure that [Finance Minister Bill] Morneau and [Prime Minister Justin] Trudeau have announced for families and businesses be wrapped up in a bill and passed in a couple of hours. Everything they've said to the public should pass," he said. "Everything that gives them special powers to go around Parliament should not. It's that simple."

Trudeau will address the nation at 11:15 a.m. ET today, before Parliament meets at noon to vote on the stimulus package.

With files from CTV's Rachel Aiello.