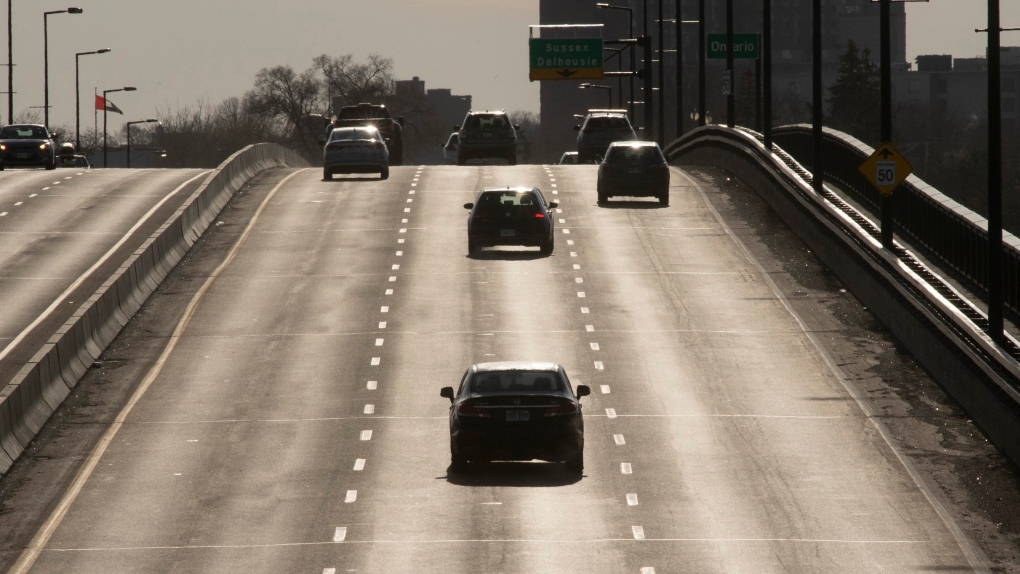 OTTAWA -- Ecology Ottawa and two Councillors would like to see pedestrians and cyclists fill empty traffic lanes on Ottawa’s roads during the COVID-19 pandemic.

The City of Ottawa tells CTV News Ottawa that there has been an approximately 50 per cent decrease in traffic across the city over the past two weeks.

Employees working at home, school cancellations and calls for physical distancing has reduced traffic volume on all roads and highways.

Ecology Ottawa has launched a petition calling on the City of Ottawa to “re-purpose underused roadways to provide safe outdoor access for pedestrians and cyclists during the COVID-19 pandemic.”

In a media release, Ecology Ottawa says “now is the time for the Mayor to show leadership by re-purposing underused streets for the health and safety of pedestrians and cyclists.” The group notes ensuring safe access to the streets would allow Ottawans to get outdoors while practicing effective physical distancing.

Councillor Catherine McKenney asked staff about the possibility of closing the northbound curb lane on Bank Street, from Riverdale to Gloucester, to traffic.

McKenney posted the response on Twitter, with staff saying they would not be proceeding with the request.

Disappointing but hardly surprising response to our request to take one parking lane on Bank Street for residents who need to get out for a walk to keep a safe distance. #PhysicalDistancing #COVID19 #ottcity pic.twitter.com/Yr8lf9gcju

Menard also called on Mayor Jim Watson to make it easier for people to get their groceries or fill prescriptions on Bank Street.

There are still many essential businesses open @intheglebe that people want to get to. There were 10x more pedestrians supporting businesses than parked cars today, with entire lanes dedicated for parking that were empty. #Ottawa #Space4People #ottwalk pic.twitter.com/nGgSBc15rI

Kanellakos told Council each decision will be on a “case-by-case basis”, with the city looking at available resources as part of the decision-making process.

“If we can do it, we do it. If we can’t, they’ll be told we can’t,” said Kanellakos, adding city staff will consult with the Medical Officer of Health on decisions.

Mayor Watson expressed some “concerns” about the proposal to close lanes for pedestrians, saying it sends a bit of a “mixed message. Let’s expand walking opportunities when we’re telling people we shouldn’t be out socializing.”

The Mayor also wondered if closing roads would divert city staff away from preparations for possible spring flooding.

“I agree with the Mayor, we don’t want to create a situation where there is a draw for people to gather in a street or something like that. But I think there’s things we can look at case-by-case that make sense, that are feasible.”

Council accepted McKenney’s request to look at measures, but the Mayor said any costs would be covered by a Councillor’s office budget.

The National Capital Commission said on Thursday that “at this time, we are not considering roadway closures of either the Sir John. A Macdonald Parkway or the Sir George-Etienne Cartier Parkway to vehicle traffic.”

The NCC says the decision was due to logistical challenges, staffing requirements and the need to ensure continued access for transit and emergency vehicles.

We need more #Space4People on our streets. Here is one example of a parked car taking up valuable space that is needed for people to physically distance. #LivingSpace #PhysicalDistancing #Covid_19 #OttCity #ottwalk @JimWatsonOttawa @EcologyOttawa @HealthTransport pic.twitter.com/4SZqVyDdah