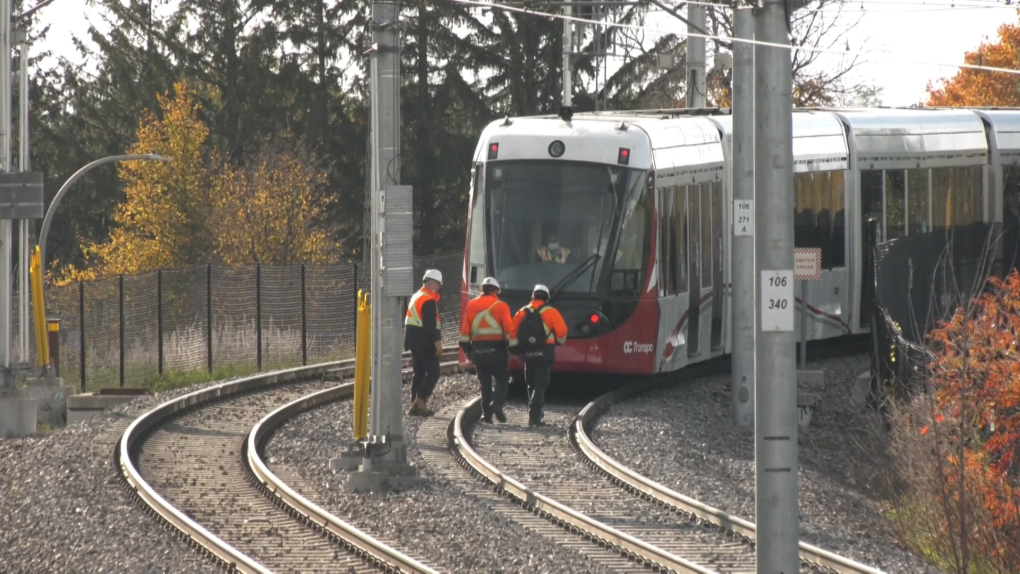 Workers with Alstom and RTG watch as an LRT car moves along the Confederation Line on Oct. 27, 2021, near the spot where a train derailed on Sept. 19. (Jeremie Charron/CTV News Ottawa)

City officials and the public may finally get some answers on the issues that plagued the launch of Ottawa's light rail transit system next week, when the public inquiry releases its final report.

The Ottawa Light Rail Transit Public Inquiry announced on Wednesday that the final report will be tabled on Nov. 30, at 11 a.m.

"We made a commitment to the people of Ottawa. We said we would find out why problems occurred in the construction and maintenance of the LRT, and how to avoid these in the future," Commissioner, Justice William Hourigan said in a statement.

"I believe we have done that."

Justice Hourigan was tasked with a mandate to investigate the commercial and technical circumstances that led to the Stage 1 breakdowns and derailments of the Confederation Line since its launch in September, 2019. Hourigan will present his findings in the final report, and recommendations to prevent these issues from happening in the future.

The inquiry heard from 41 witnesses during 18 days of public hearings in June and July, hosted an expert panel to discuss public-private partnerships in July, and held two nights of meetings to hear from the public in May.  The commission also received well over a million documents and interviewed dozens of witnesses before the start of public hearings.

In closing statements to the inquiry, the main parties pointed the finger of blame at other members of the partnership for the issues.

The city blamed the consortium it contracted to build the LRT system, noting several issues plagued the line since its launch.

"(Rideau Transit Group's) failures to perform its design, construction and maintenance obligations cannot be blamed on the City. In particular, these failures do not arise from the City’s procurement approach, the structure and content of the Request for Proposals, the adequacy of the Project Agreement, the City’s oversight of the Project or any of the other criticisms of the City’s conduct raised by Commission counsel during this Inquiry," the city’s closing submission said. "None of those matters caused or contributed to the issues that led to the breakdowns and derailments."

Rideau Transit Group said the problems that arose after the launch of the LRT system were "reasonably common problems" for a complex infrastructure project like the Confederation Line.

“The problems with the project had an outsized impact on Ottawa’s residents because their municipal government set unrealistic expectations,” RTG said.

Alstom said the city of Ottawa was too inexperienced in major infrastructure projects and attempted to micromanage the project.

"To make up for this inexperience, the City retained an army of expert consultants to guide them through every aspect of the Project, from design and construction to operations and maintenance. Yet, the City often failed to heed its experts’ advice," Alstom said in its final submission to the inquiry. "Instead, under extreme public scrutiny in Ottawa, the City was pressured to make short sighted decisions, to ‘act tough’ with its contractor partner, and, ultimately, to put the System into service before it was ready."

Alstom also suggested it was "set up to fail" by its partners.

“The City and RTG’s decision to start Revenue Service before the System was 100 per cent ready presented enormous challenges for RTM and Alstom, as anticipated by RTG.”

The inquiry was called shortly after LRT service resumed following a 54-day shutdown in the wake of a Sept. 19, 2021, derailment – the second derailment in six weeks on the system.  Council had rejected a motion from former Coun. Catherine McKenney to call a judicial inquiry into the LRT system, instead asking municipal Auditor General Nathalie Gougeon to investigate the LRT contract.

How much water do you need to drink in a day? 'Eight glasses a day' rule a myth: study

An Ontario woman has been charged after graphic video of a horse being dragged emerges, Alberta Premier Danielle Smith makes an about-face on a promise to legislate human rights protections for those who aren't vaccinated against COVID-19, and a former member of the Vancouver Canucks coaching staff files a human rights complaint against the team. Here's what you need to know to start your day.